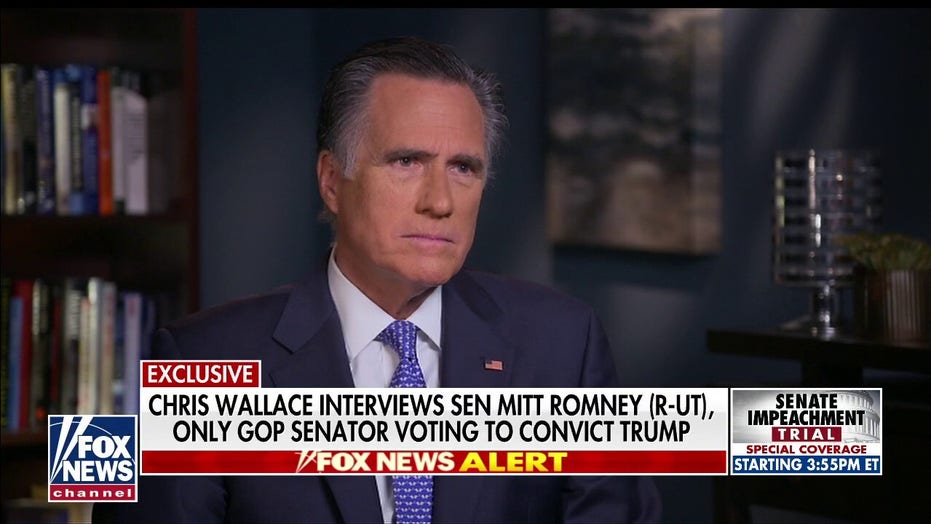 Sen. Mitt Romney, R-Utah, told Fox News' Chris Wallace Wednesday in an exclusive interview that he "had to follow my conscience" in deciding to vote to convict President Trump on abuse of power, a decision that's likely to ignite serious blowback from Trump and others in the Republican Party.

"I believe that the act he took, an effort to corrupt an election is as destructive an attack on the oath of office and our Constitution as I can imagine," Romney said. "It is a high crime and misdemeanor within the meaning of the Constitution, and that is not a decision I take lightly. It is the last decision I want to take."

Romney later told Wallace: "I had to follow my conscience," when asked about the likely blowback from Trump.

"I understand there's going to be enormous consequence," he said, "and I don't have a choice in that regard. That's why -- that's why I haven't been anxious to be in the position I'm in."

The former Republican nominee for president also said his deep Mormon faith played a significant role in his decision. When Wallace asked Romney about Trump's reaction to his comments last year saying the Mueller report "sickened" him, Romney said that any political benefit he would gain from voting to acquit Trump on abuse of power would not overtake his faith and the oath he took when being sworn in as a Senator at the impeachment trial.

"Yeah, again, I can't let personal considerations, if you will, overwhelm my conscience and overwhelm my oath to God," Romney said. "I mean, this for me is ... well it's the most difficult decision I've ever made in my life. There's been nothing that compares to this."

Rep. Adam Schiff, D-Calif., one of the House impeachment managers, lauded Romeny on his decision to convict Trump on one of the two impeachment articles the House passed, saying it, "showed a lot of moral courage."

It's likely Romney will face blowback from both Republican voters in his deep-red state of Utah and other Republican members of Congress for his vote to convict Trump. He told Wallace he was ready for the repercussions.

"Yeah, it's going to get very lonely," he said. "And again, the consequences are significant. They're, um, uh -- they're enough that it made this a very difficult process for me. There has not been a morning since this process began that I've slept beyond 4:00 a.m."

'I agree with him 80 percent of the time. I don’t dislike the president. We get along fine ...  But I believe he made a very serious miscalculation of judgment, one that strikes at the very core of our Constitution.'

Romney also mentioned that his large family was a concern in making his decision to vote to convict Trump, understanding that it is possible those upset at the senator's vote could target those related to him.

"I have spoken a good deal with my family because this will have consequence -- the blowback will have consequence, not just for me, but for my family, for my wife, for my sons, for my daughters-in-law, for my 24 grandkids," Romney said. "That’s why the burden has been so substantial as I’ve done this, but they all said, you’ve got to do what you believe is right. There was no call to pull back or, gee, dad, ya know, this is going to be tough. They said, do what you believe is right." 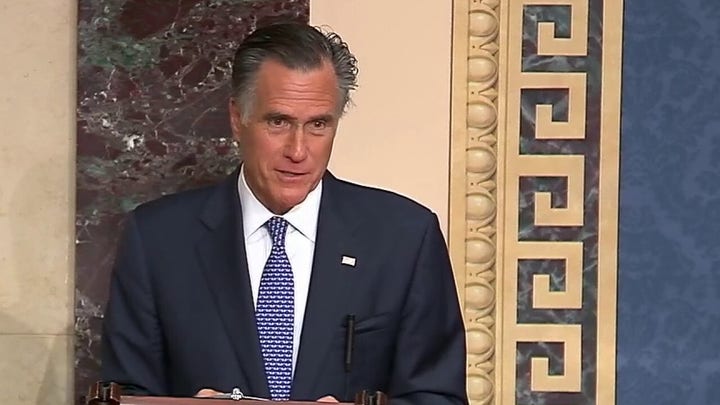 Romney was elected to his Utah senate seat in 2018, meaning he is not up for reelection until 2024 and will likely be around Washington for at least a few more years. There is an effort to allow for his recall in the Utah state legislature, but it is unlikely to succeed and even if it does could face serious constitutional challenges.

On his political future, the senator told Wallace that any consequences from his vote on impeachment would not be as bad as losing the 2012 presidential election to Barack Obama, which led Romney to take a six-year hiatus from running for elected office. So, Romney said, he is not concerned about the potential fallout from his vote.

"I’ve got broad enough shoulders to be able to weather personal changes in my, in my career, political or otherwise, but what I don’t have is the capacity to ignore my conscience... What the president did was grievously wrong, and by the way, I say that at a time when I applaud what’s happening with the economy, I agree with him 80 percent of the time," he said.

Romney added: "I don’t dislike the president. We get along fine. I’ve known him for years and years, well before politics, before either one of us was in politics. But I believe he made a very serious miscalculation of judgment, one that strikes at the very core of our Constitution."