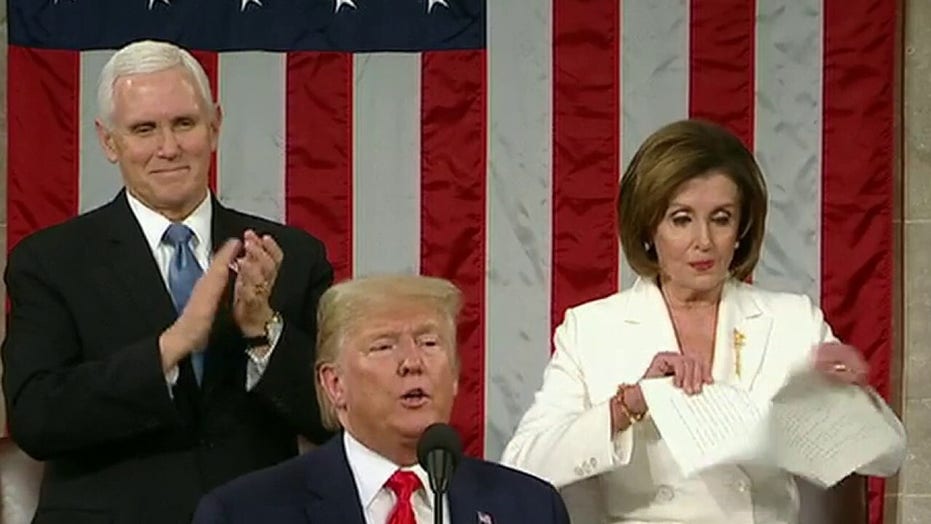 Mike Emanuel reports from Capitol Hill with reaction from both sides of the aisle after the President's State of the Union address.

House Speaker Nancy Pelosi, D-Calif., made headlines around the world by tearing up a copy of President Trump's State of the Union once he finished his address Tuesday night, but that moment was just one example of how Pelosi made her disdain for the president known for all to see.

From beginning to end, the tension between Trump and Pelosi was visible, starting with Trump appearing to ignore an offer for a handshake from the speaker.

Seconds later, Pelosi broke what is traditional protocol for how presidents are introduced at the State of the Union. Rather than deliver the traditional flowery introduction in which House speakers say, "Members of Congress, I have the high privilege and distinct honor of presenting to you the President of the United States," she opted for a more terse version

"Members of Congress, the President of the United States," she said.

In 2019, Pelosi didn't give any introduction for Trump's State of the Union. Trump walked onto the podium and simply began talking once applause started to die down. Pelosi did use the traditional introduction for former President Obama.

Former House Speaker Paul Ryan, R-Wis., used the traditional State of the Union introduction for Trump when he was the speaker.

WATCH: STUNNING REUNION OF MILITARY FAMILY AT STATE OF THE UNION

Then during Trump's speech, Pelosi could occasionally be seen shaking her head or shrugging as Trump spoke. One particularly noticeable shrug from Pelosi came as Trump said, "We must always remember our job is to put America first."

She began clapping, stopped for a second as she frowned and then shrugged, then resumed an unenthusiastic clap.

Pelosi could also be seen reading the paper copy of the president's address throughout his speech, often obscuring her face from the camera.

The culmination of the tensions between Pelosi and Trump came as Pelosi dramatically ripped Trump's speech in two as he concluded his remarks.

But she continued to slight the president even after the event had concluded.

When asked why she tore up Trump's speech by a reporter, Pelosi shot back, "Because it was the courteous thing to do considering the alternatives."

The speaker then released a statement slamming Trump's speech for alleged falsehoods.

"The manifesto of mistruths presented in page after page of the address tonight should be a call to action for everyone who expects truth from the President and policies worthy of his office and the American people," she said in a tweet linking to a larger statement.

Trump hit back at Pelosi's actions Tuesday, retweeting a post from the White House that noted some of the president's high-profile guests, including a Tuskegee Airman and a child who survived being born at 21 weeks, were in the contents of the speech Pelosi tore.

The moment marked a stunning departure from decorum, at an event where even partisan enemies typically put on a show of tolerance toward each other. Speaking to Fox News' "Hannity," Sen. Ted Cruz, R-Texas, called Pelosi's actions "disgraceful" and "disgusting," saying they made him "angry."

Others including prominent legal scholar Jonathan Turley panned Pelosi as well, with some even calling for her resignation as House speaker.

“For those of us who truly love the House as an institution, it was one of the lowest moments to unfold on the floor… if Pelosi does not apologize and agree to honor the principle of neutrality and civility at the State of the Union, she should resign as speaker,” Turley wrote.

The vitriolic divide comes as Trump is almost certain to be acquitted of the House's impeachment charges in a Wednesday Senate vote.