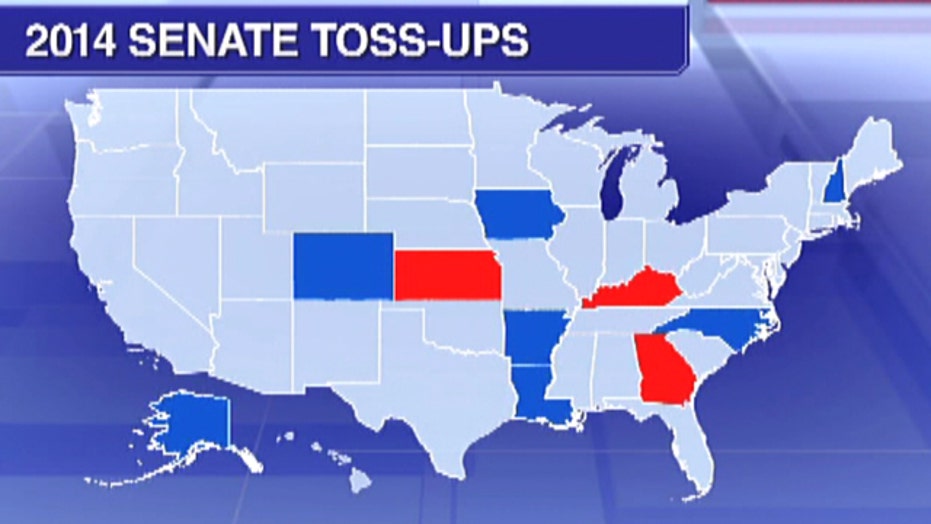 After eight years in the proverbial wilderness, Republicans are feeling confident about their chances of reclaiming the Senate majority in next week’s elections – as the two-year, bare-knuckle battle boils down to about 10 key races in the final days.

He added: “There's genuine concern about the direction the country has gone with President Obama and his policies.”

From Alaska to Iowa to Louisiana, candidates are locked in tight and tough battles, with Republicans needing a net total of six seats to take control of the Senate – and, presuming they hold their House majority, Congress. The Obama factor has loomed large over the races, as Republicans methodically have tried to tie their rivals to the unpopular president.

But Democrats have done what they can to make these races more about local issues.

Justin Barasky, spokesman for the Democratic Senatorial Campaign Committee, brushed off talk of Democrats running away from Obama.

“Unlike the Republicans, who like to nationalize their races, our races are different and will be won on local issues,” he insisted.

Five days before the big day, the map looks like this:

Republicans need six seats and see three pickups as a virtual lock -- Montana, South Dakota (despite a recent scare in that state), and West Virginia.

From there, Republicans would need to win three of the following Democrat-held seats: Alaska, Arkansas, Colorado, Iowa, Louisiana and North Carolina. Then there’s the bonus state of New Hampshire, where Republican Scott Brown has been closing the gap against Sen. Jeanne Shaheen.

Republicans, though, might need to make additional gains in those states, with three of their own seats being challenged, in Georgia, Kansas and Kentucky.

The outcome continues to be anybody’s guess, and the possibility of runoffs in Louisiana and Georgia means the balance of power could be undetermined for weeks after Election Day.

The latest Fox News poll points to a tight contest. Though Republican voters were more enthusiastic than Democrats – indicating potentially higher turnout – on the question of which party voters would prefer in control, the numbers tightened.

Likely voters said they want Republicans to win control of the Senate by 47-45 percent. Two weeks ago, it was 47-43 percent.

It is difficult to make a direct connection between generic vote results and individual races. But the individual races continue to blow back and forth. A Quinnipiac University poll on Wednesday showed Republican Joni Ernst ahead by 4 points in her Iowa Senate race against Rep. Bruce Braley.

Though Republicans have all the buzz, Democrats are using the final few days to try and prove everyone wrong, blitzing key states with ad buys in the 11th hour, hoping to shore up traditional black and women voters and relying on their tried-and-true digital and field networks, getting their voters out to the polls.

Experts agree that not all races will be won or lost on Obama, but his numbers have spooked enough candidates that he has not been much of a presence on the campaign trail. He only just started to campaign vigorously for Democrats – but is sticking mostly to gubernatorial races.

Democratic strategist Dan Gerstein said that while “negative energy toward the president” is a big factor, “intense hand-to-hand combat” also matters at this stage.

“It could be that one side has a really kickass mobilization field director, which could have nothing to do with the fierce ideological struggle between the parties in Washington,” he told FoxNews.com.

In Georgia, Kentucky and Kansas – which all have Republican-held seats -- Democrats have been emboldened by a recent uptick in numbers. In Georgia, Democrat Michelle Nunn was up by 3 points over Republican David Perdue in a CNN/Opinion Research Poll released on Friday (an Atlanta Constitution poll released later that same day showed Perdue up by 2 points). The seat currently is held by retiring Republican Sen. Saxby Chambliss.

Meanwhile, Democrat Alison Lundergan Grimes, after some recent stumbles and questions over whether the party infrastructure was still behind her, may be back in the game in her race against Senate Minority Leader Mitch McConnell.

Still, McConnell consistently holds the lead in polls. He led by just a point in one survey earlier this month, but widened that to 6 in the latest New York Times/CBS News poll.

One complication for Republicans is in Kansas, where the Democrat dropped out and the independent, Greg Orman, has since surged against Sen. Pat Roberts. An Oct. 23 Rasmussen poll showed Orman, whom Republicans accuse of being a stealth Democrat, 5 points ahead of Roberts.

Asked about the Roberts race, Moran predicted to Fox News that he’ll hold on.

“Momentum [is] on his side,” he said, “significantly different than where this race was just a few weeks ago.”

One of the most intense fights continues to play out in Iowa between Ernst and Braley. This one promises to be one of the most expensive races in 2014. The parties spent over a million each on their candidates in the seven days preceding Oct. 23. Outside organizations also have thrown some $3.3 million in support of Ernst during the same time period.

The most expensive race, though, remains the North Carolina match-up between Tillis, who is trying to unseat Hagan. The parties have spent over a million in the last week, with the total price tag on the race estimated at over $100 million.

While Republicans were getting nervous that former Republican Sen. Larry Pressler (now an independent) might pull votes away from their candidate Mike Rounds in South Dakota, many still see the race as leaning Republican.

The National Republican Senatorial Committee released an internal poll on Oct. 22 that found Rounds has a double-digit lead over both Pressler and Democrat Rick Weiland. This would be a major leap over a SurveyUSA poll released in early October which said Rounds had only a 4-point lead over Pressler and Weiland.

On the East Coast, Shaheen is still battling Brown, who once held a Massachusetts Senate seat before losing it to Democrat Elizabeth Warren. Now he’s neck-in-neck with Shaheen for her job.

To shore up support, Shaheen is bringing in former Secretary of State Hillary Clinton, who plans to stump for her on Nov. 2. Former President Bill Clinton recently was in Arkansas, campaigning for Democratic Sen. Mark Pryor, who is behind Republican Tom Cotton by at least 3 points in every major poll.

Bill Clinton also has starred in TV ads for Grimes, and has joined his wife on the campaign trail in North Carolina, Colorado and Louisiana.

Barasky said his party doesn’t worry about going into Nov. 4 as the underdogs.

“We heard this song and dance before,” he said. “We feel confident we will hold the majority; we know a lot of races are close and can go either way, but we believe we will hold on to them.”