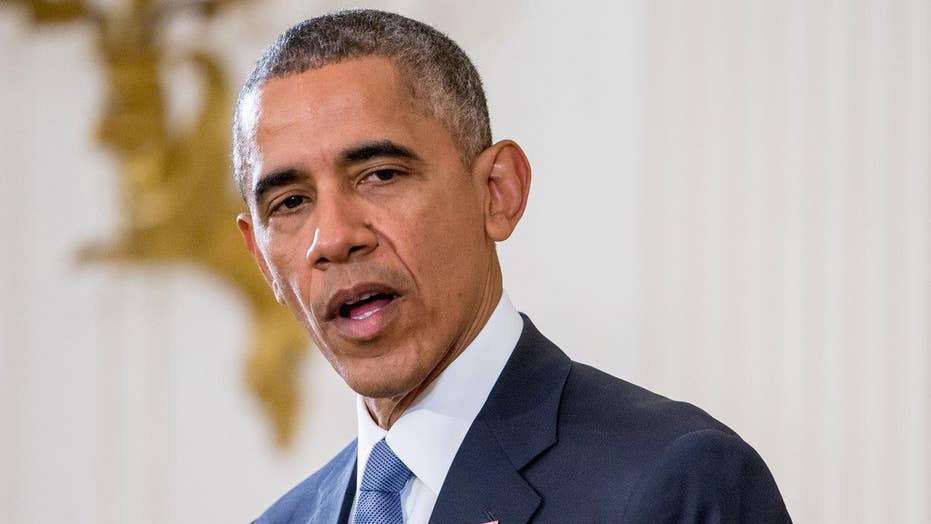 Capitol Hill Republicans are aiming to take the air out of President Obama’s push for a global climate deal at next week’s international summit in Paris, warning they will block vital funding if he tries to circumvent Congress.

Obama and other world leaders are charging ahead with the two-week U.N. conference starting Monday, under heightened security in the wake of the Paris terror attacks. At a press conference alongside French President Francois Hollande, Obama cast the climate summit as a global statement of solidarity.

“What a powerful rebuke to the terrorists it will be when the world stands as one and shows that we will not be deterred from building a better future for our children,” Obama said earlier this week.

But at home, the country and the Congress remain deeply divided over the president’s plans for cutting emissions – and lawmakers are worried he will etch an international pact without seeking Senate approval.

Looking for leverage, critics of the president’s climate agenda have zeroed in on the president’s goal of directing $3 billion – including $500 million in the near-term – for the U.N. Green Climate Fund, which would help developing nations deal with climate change.

“Without Senate approval, there will be no money – period,” Sen. John Barrasso, R-Wyo., said at a hearing last week, stressing that any agreement with legally binding requirements must come before the Senate for a vote.

He and Sen. Jim Inhofe, R-Okla., chairman of the Senate Environment and Public Works Committee, sent a letter to Obama signed by more than three-dozen senators likewise urging the president to have his special envoy relay to developing nations’ representatives that Congress “will not be forthcoming” with the Green Climate Fund money absent a Senate vote.

In addition, Inhofe joined Democratic Sen. Joe Manchin of West Virginia and Republican Sen. Roy Blunt of Missouri in introducing a resolution calling for the Senate to have a say in any climate agreement.

Republicans generally argue that any deal with legally binding elements should be handled like a treaty, and subject to Senate ratification. The Obama administration, though, has given varying statements on how it views any potential pact.

Secretary of State John Kerry rattled European officials when he was quoted earlier this month in the Financial Times saying any agreement was “definitively not going to be a treaty.” French President Hollande bristled at the notion that a deal would not be legally binding and was quoted saying if that’s the case, “there won’t be an agreement.”

But the State Department clarified that the U.S. wants binding and non-binding components. An official told Politico: "The FT interview with Secretary Kerry may have been read to suggest that the U.S. supports a completely non-binding approach. That is not the case and that is not Secretary Kerry's position. Our position has not changed: the U.S. is pressing for an agreement that contains provisions both legally binding and non-legally binding."

House Science Committee Chairman Lamar Smith, R-Texas, said at a recent hearing that the president doesn’t want to come to Congress with a Paris agreement because “he knows the Senate will not ratify it.”

Smith also warned a centerpiece of the U.S. commitment that Obama will bring to the table in Paris – the Clean Power Plan, regulations on power plant emissions – “represents massive costs without significant benefits.” As lawmakers threaten to block U.S. support for the U.N. climate fund, The Wall Street Journal reports that the House next week also plans to vote on measures to repeal those EPA rules for power plants, on the heels of the Senate doing the same.

It’s doubtful Republicans could overcome a presidential veto, but the vote is a reminder of the resistance facing those regulations, which are the subject of a massive federal court case brought by mostly Republican-led states.

The administration suggests it has high hopes for the summit.

Obama struck a climate deal with China before the Paris talks and plans to meet one-on-one with Chinese President Xi Jinping – as well as Indian Prime Minister Narendra Modi – in Paris next week.

Ahead of the summit, Christiana Figueres, executive secretary of the U.N. Framework Convention on Climate Change, told FoxNews.com a historic deal will be reached.

“We’re going to have a Paris agreement,” she said.