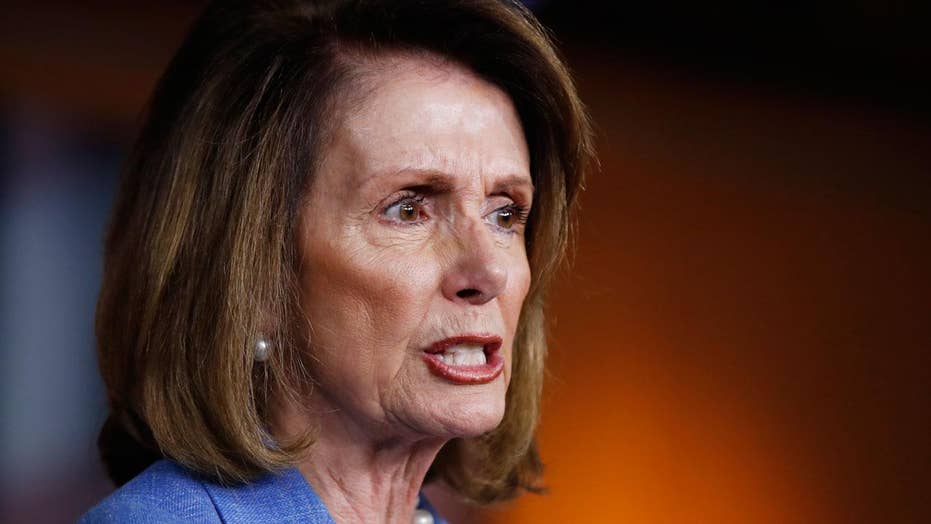 A Republican-aligned super PAC is trying to knock down Democrats’ official effort Monday to rebrand themselves as “a better deal” -- launching an ad campaign that targets House Minority Leader Nancy Pelosi and argues her party remains mired in “the same, old liberal ideas.”

The Congressional Leadership Fund is behind the digital ad campaign, which is titled “Resistance” and targets Pelosi’s San Francisco congressional district and 12 other Democrat-leaning districts that President Trump won last fall.

“The Democrats are the party of the resistance,” the narrator says in the 33-second ad that includes images of window-smashing and other protester-driven violence surrounding the inauguration.

“Radical extremists who destroy buildings, burn cars and divide America. Hollywood celebrities who are blinded by their hatred of the president. Nancy Pelosi and the Washington Democrats answer to them.”

On Monday, Pelosi and Senate Minority Leader Chuck Schumer, D-N.Y., will lead an event in Virginia to announce the “better deal” agenda, following party leaders acknowledging they lost to Trump in large part because voters didn't know what the party stood for.

They intentionally are heading outside Washington to host the event in the district of GOP Rep. Barbara Comstock, whom they hope to defeat next year.

Schumer acknowledged on Sunday that Democrats were partially to blame for Americans not knowing what the party stands for.

"When you lose an election with someone who has, say, 40 percent popularity, you look in the mirror and say what did we do wrong?”  he said on ABC’s “This Week.” “And the number one thing that we did wrong is we didn't have -- we didn't tell people what we stood for."

However, Congressional Leadership Fund leaders say the message “continues to advance the same, old liberal ideas including single-payer health care, tax increases and military cuts,” despite all of the poll testing.

“The simple truth is that a Democrat is someone who is beholden to Nancy Pelosi, wants to raise your taxes, is blinded by their hatred of the president, and regularly loses elections,” said Cory Bliss, the political action committee’s executive director.