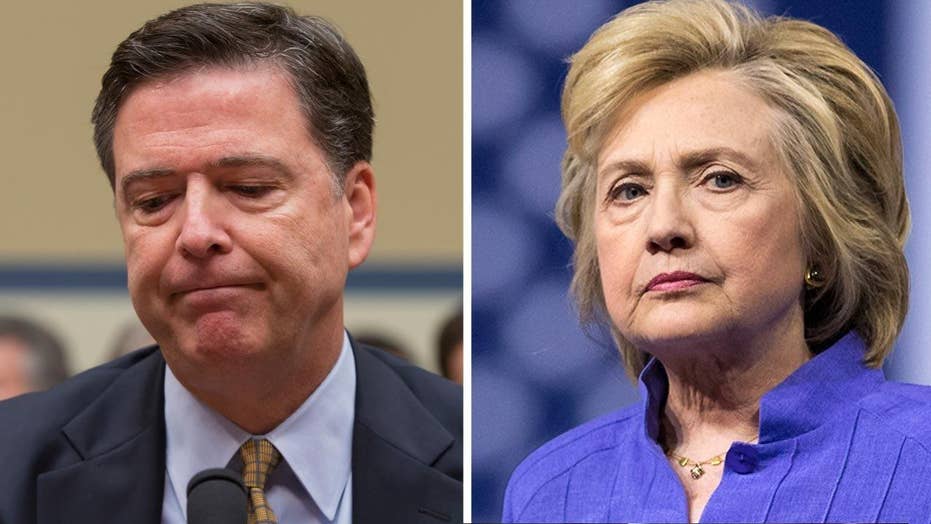 The tech specialist who scrubbed Hillary Clinton's email archive and was recently found to have sought help on Reddit for how to hide a certain "VIP's" email address was acting at the behest of Clinton aides Cheryl Mills and IT specialist Bryan Pagliano, a top House Republican charged Wednesday.

"The clincher: just last week, he's going online and trying to delete these Reddit posts,"  Rep. Jim Jordan of Ohio said of Colorado-based tech specialist Paul Combetta, who reached a limited immunity deal with the Justice Department. "He's trying to cover up his tracks, he's trying to cover up the cover up."

After a House Judiciary Committee hearing, Jordan pointed to the FBI's timeline of the investigation released to Congress and to the public online. The FBI records show July 2014 was a pivotal month for Clinton's aides and support staff because that summer the State Department warned Clinton's then-chief of staff Cheryl Mills that "a request for Clinton's work-related emails would be forthcoming" from Congress.

On July 23, 2014 Combetta got a call from Mills and the following day, he got an email from Clinton IT specialist Pagliano, who set up the server.

On July 24, Combetta went online to Reddit where he asked for help stripping out "a VIP's (VERY VIP) email address from a bunch of archived emails." He also wrote, "Basically, they don't want the VIP's email address exposed to anyone."

Jordan told Fox after the hearing the "they" Combetta referred to could only be Mills and Pagliano, based on the FBI's own records. Like Combetta, Mills and Pagliano were granted limited immunity deals by the Justice Department, but in such a high profile case, legal experts said the deals would not go through without senior FBI leadership consultation.

Jordan's position was backed up during the hearing by the Republican chairman of the House Government Oversight Committee, Jason Chaffetz, who is running his own investigation.

"There was communication from Cheryl Mills that there was a preservation order?" Chaffetz asked FBI Director James Comey, who responded "Yes."

"And he (Combetta) did indeed use Bleachbit on these records?" Chaffetz continued.

"Sure that’s why the guy wouldn't talk with us without immunity," Comey replied.

“And so when he got immunity what did you learn?" Chaffetz asked.

"We learned no one directed him to do that," Comey said.

"You really think he did this by himself?" Chaffetz demanded.

Comey replied no evidence was found to contradict Combetta's story, adding "I never affirmatively believe anybody except my wife."

Republicans also alleged, based on the FBI evidence, that Combetta lied to the FBI and still kept his immunity deal.

"When I was at the Department of Justice, your word for lying to federal agents was an 18 USC 1001 charge or potential obstruction of justice charge. It wasn’t immunity," Rep. John Ratcliffe, R-Texas, said.

"It depends on where you’re trying to go with the investigation,” Comey responded.  “If it’s a low level guy and you’re trying to move up in the chain, you might think about it differently."

Ratcliffe then emphasized, "Well, he lied to an FBI agent. You don’t think that’s important?"

Chaffetz also alleged that Mills misled the FBI and kept her immunity deal. He produced for the panel an email from February 27, 2010 that Mills wrote to Bill Clinton aide Justin Cooper, who managed the email system.

"Fyi - hrc email coming back -- is server okay?"  Mills wrote.  But what Mills told the FBI in her interview last April conflicts with that. Mills told agents she didn't know about the Clinton server, used exclusively for government business, until after they left the State Department in January 2013, a full three years later.

Congressman Darrell Issa, R-Calif., challenged Comey on the Mills immunity deal, which he said was much broader than previously reported. In exchange for FBI access to her laptop, Issa said Mills was shielded from prosecution for obstruction of justice and destroying government records.

Comey said he disagreed with Issa's reading of the deal, though the congressman read it again on a break and told Comey he stood by his analysis. Comey confirmed that classified emails were found on Mills' laptop and no action was taken because it fell under the deal's protections.

Democrats said the committee Republicans were driven by politics and not facts.

"I think that the mud being thrown from the other side of the table here, continually, is only because of the presidential election, and the FBI deciding there was nothing to prosecute, it's over, we know no one would even be talking about it if Hillary Clinton weren't a presidential candidate, this is pure political maneuvering," Rep. Jerry Nadler of New York said in Comey's defense.

"What's not fair is any implication that the bureau acted in any way other than independently, competently and honestly here That's just not true. I knew this was going to be controversial, I knew there'd be all kinds of rocks thrown, but this organization and the people who did this are honest independent people. We do not carry water for one side or the other."