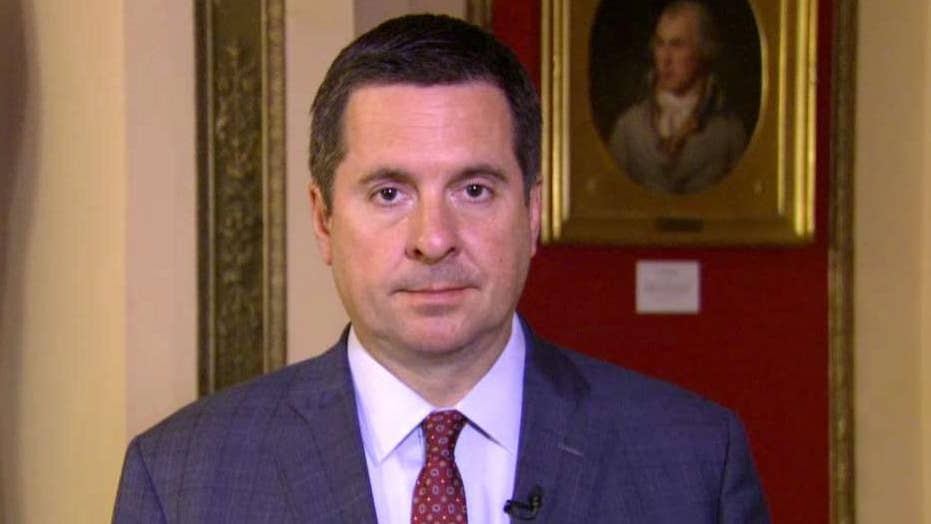 Democrats want to get their hands on Special Counsel Robert Mueller's report on the Russia investigation so they can leak classified information "to all their buddies in the media," Rep. Devin Nunes (R-CA), ranking member of the House Intelligence Committee, charged Monday.

On “Outnumbered Overtime” with Harris Faulkner, the congressman said he “highly doubts” Democrats will get to see an unredacted Mueller report especially “if there is grand jury testimony in there.”

“I was actually the first member of Congress to say that we not only need the Mueller report, which I actually call the ‘Mueller Dossier’ because I think it’s written by partisans and I don’t think there’s a lot in there, but what I am interested in learning is, how exactly did Mueller’s team create this report? Because we know we had a lot of partisan actors in there so I want to see the underlying information,” Nunes said.

“I want to see the interviews that they did, I want to see who they subpoenaed, I want to see if they had any wiretaps, because we know that these cast of characters, two were kicked off early, we’ve already caught them taking exculpatory evidence against Americans and leaving it on the cutting board floor. So we really do want to see, not just the report, but the underlying information.”

Nunes made the comments as House Judiciary Committee Democrats are preparing to authorize subpoenas this week seeking Special Counsel Robert Mueller’s full report after the Justice Department indicated it will miss a Democrat-imposed deadline of April 2 in a major escalation of the battle between Congress and the administration over access to the underlying documents and evidence from the probe.

Last week, Attorney General Bill Barr announced that the Justice Department and the special counsel were “well along in the process of identifying and redacting” sensitive material in the more than 300-page report and would likely have it to Congress by mid-April, “if not sooner.”

But Judiciary Committee Chairman Jerrold Nadler, D-N.Y., announced Monday that the panel will vote Wednesday to authorize the option of issuing subpoenas.

“As I have made clear, Congress requires the full and complete Special Counsel report, without redactions, as well as access to the underlying evidence,” Nadler said in a statement.

"I just want to make sure that everyone understands what full transparency means," Nunes said. The Democrats on the left here, they just want to get their hands on the report so that then they, there will probably be classified, a lot of classified information in there so that they can leak it, so they can leak it to all their buddies in the media. So that they can continue on going down rabbit holes of pretending that there was some kind of Russian collusion."

Barr's summary said the special counsel found no evidence of collusion between members of the Trump campaign and the Russians during the 2016 presidential election.

The Judiciary Committee cited “historical precedent” for the full release of the Mueller report—specifically Watergate, when a judge ordered a 55-page grand jury roadmap to be provided to the committee; and during the Ken Starr investigation of former President Bill Clinton, when a 455-page report, along with evidence including grand jury material, was provided to the panel.

Barr has indicated he plans on sharing much of the report itself. Last week, he said the Justice Department and the special counsel were “well along in the process of identifying and redacting” sensitive material, including material that “by law cannot be made public” -- covering “material the intelligence community identifies as potentially compromising sensitive sources and methods; material that could affect ongoing matters, including those that the Special Counsel has referred to other Department offices; and information that would unduly infringe on the personal privacy and reputational interests of peripheral third parties.”

“We’d love to move on from the issue. However, we are going to make criminal referrals,"  Nunes said, adding House Republicans have been investigating for more than two years.

“I wish we never had to go through what is really three years of using our counterintelligence capabilities against a political campaign,” he said.

“I agree though, it’s going to be very hard. The fact that they ever looked at obstruction of justice because Comey got mad and went and leaked his papers out to the media, an illegal leak, by the way, taking FBI documents,  just because that happened when there was no crime, to begin with, how are you going to go after obstruction of justice? It’s pretty silly,”  said Nunes. “But I do agree the American people are split and that’s why full transparency is in order which means we need to know everything that went into Mueller’s dossier, we really need to know how they got that information.”