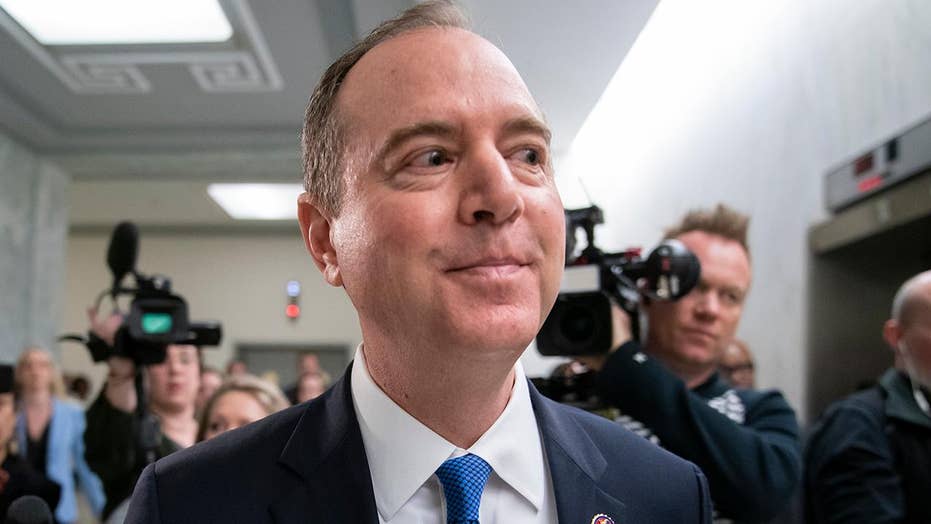 Should Adam Schiff resign from Congress in wake of 'no collusion' Mueller report?

Congressional Democrats are stepping up calls for Special Counsel Robert Mueller's Russia report to be released in full -- even preparing subpoenas -- despite complaining just over a year ago that Republicans were jeopardizing “sources and methods” with their decision at the time to release a memo on alleged government surveillance abuse.

Now, the roles are reversed.

Republicans, many of whom still want the report released, are deferring to Attorney General Bill Barr as he says he needs time to vet with his team what information can and cannot be made public. But Democrats have shown little patience for that process, blasting Barr for releasing only a four-page summary and imposing an April 2 deadline for Mueller to turn over the full report to Congress, demanding “full transparency.”

BARR TO RELEASE MUELLER REPORT TO CONGRESS BY 'MID-APRIL, IF NOT SOONER;' WILL NOT TRANSMIT TO WH FOR PRIVILEGE REVIEW

“Congress has asked for the entire Mueller report, and underlying evidence, by April 2. That deadline stands,” House Intelligence Committee Chairman Adam Schiff said Friday, after Barr said he would provide the full Mueller report to Congress by mid-April. “In the meantime, Barr should seek court approval (just like in Watergate) to allow the release of grand jury material.”

He added: “Redactions are unacceptable. #ReleasetheReport.”

But Schiff, D-Calif., is one of several Democrats who blasted then-House Intelligence Committee Chairman Devin Nunes, R-Calif., during the last Congress for releasing a GOP memo on alleged abuses of the Foreign Intelligence Surveillance Act (FISA). The memo described the unverified Trump "dossier" as critical for obtaining surveillance warrants to spy on a Trump campaign aide.

The GOP memo, which was also four pages long, was released in an unredacted and declassified format, with White House approval.

House Speaker Nancy Pelosi, D-Calif., said at the time that President Trump's decision to release an unredacted version of the memo was a danger to national security.

"President Trump has surrendered his constitutional responsibility as Commander-in-Chief by releasing highly classified and distorted intelligence," Pelosi said in a statement on Feb. 2, 2018. "By not protecting intelligence sources and methods, he just sent his friend Putin a bouquet."

Following the release of the report, Schiff, who was the ranking member of the committee at the time, joined with Democrats on the committee to declare the GOP memo “risks exposure of sensitive sources and methods for no legitimate purpose.”

Among the House Intelligence Committee Democrats who signed onto that statement was Rep. Eric Swalwell, D-Calif.

Fast forward to today, and both Swalwell and Schiff are urging the release of the full Mueller report.

“No summaries. Show us the FULL report Mueller sent over. Every word. Every comma. Every period. #MuellerReport,” Swalwell tweeted last week.

Barr's summary said the special counsel found no evidence of collusion between members of the Trump campaign and the Russians during the 2016 presidential election. Schiff has faced GOP pressure to step down from his post for his repeated allegations of collusion during the course of that investigation, but fellow Democrats have stood by him.

“Congress requires the full and complete Special Counsel report, without redactions, as well as access to the underlying evidence,” Nadler said in a statement Monday.

The Judiciary Committee cited “historical precedent” for the full release of the Mueller report—specifically Watergate, when a judge ordered a 55-page grand jury roadmap to be provided to the committee; and during the Ken Starr investigation of former President Bill Clinton, when a 455-page report along with evidence including grand jury material was provided to the panel.

Yet Barr has indicated he plans on sharing much of the report itself. Last week, Barr said the Justice Department and the special counsel were “well along in the process of identifying and redacting” sensitive material, including material that “by law cannot be made public” -- covering “material the intelligence community identifies as potentially compromising sensitive sources and methods; material that could affect ongoing matters, including those that the Special Counsel has referred to other Department offices; and information that would unduly infringe on the personal privacy and reputational interests of peripheral third parties.”

Barr said the report, which is more than 300 pages long, would be released to Congress by mid-April, “if not sooner.”

The top Republican on the Judiciary Committee, Ranking Member Doug Collins, R-Ga., slammed the Democrats for "setting arbitrary deadlines," in a written statement:

“Judiciary Democrats have escalated from setting arbitrary deadlines to demanding unredacted material that Congress does not, in truth, require and that the law does not allow to be shared outside the Justice Department. It’s unfortunate that a body meant to uphold the law has grown so desperate that it’s patently misrepresenting the law, even as the attorney general has already demonstrated transparency above and beyond what is required.”