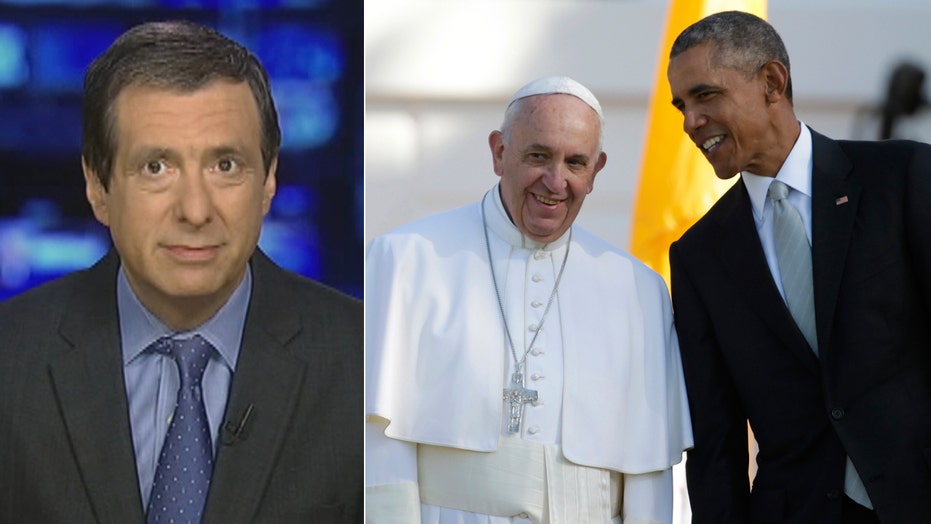 Kurtz: Polarization and the Pope

'Media Buzz' host reacts to Pope Francis' visit to US

As much of the mainstream media see it, Pope Francis’ visit to Washington is a big fat headache for the Republicans.

But it creates problems for the Democrats as well—a reality that is too often glossed over or minimized.

It was nothing short of inspiring to watch the 78-year-old pontiff shaking hands early in the morning, speaking at the White House, waving to crowds from the Popemobile. He is a humble and inspiring figure, to Catholics and non-Catholics alike, and the celebratory coverage matched the tone of a picture-perfect day here in Washington.

But the Pope’s visit has inescapably political elements. He did urge action on climate change in his brief speech at the White House, with more to come when he addresses a joint session of Congress. He has spoken repeatedly about income inequality and the excesses of capitalism.

But the major theme of the coverage has been that Francis’ visit is awkward and uncomfortable for the GOP. In fact, it is hard to put this Pope in an ideological box, and in important ways he is at odds with both parties.

The Pope himself told reporters on the flight to Washington that his views are perceived as “left-ish,” but that is a misinterpretation, and that he can always recite the “creed”—the church doctrine that, despite his tone, remains unchanged.

And yet, just look at these headlines.

“A large number of House and Senate Republicans want the leader of the Catholic Church to keep a lid on his progressive attitudes on climate change, immigration, guns and capitalism.”

Not every news outlet goes down that road: A New York Times headline says “Pope Francis’ U.S. Visit Could Benefit Both Left and Right.”

Keep in mind that when the Pope landed in Washington on Tuesday, it was hours after Senate Democrats blocked a vote to outlaw late-term abortions. While making it easier in the next year for priests to forgive women who have abortions, Francis has not changed the church’s opposition one iota.

And while the Pope famously said to a question about gays “Who am I to judge?” the Catholic Church remains unalterably opposed to gay marriage.

The Pope also remains opposed to contraception at a time when the Obama administration has fought several battles about the funding of birth control.

So he also has the ability to make Democrats uncomfortable.

Still, the image of Francis as a lefty might be fueled by the way he is assailed by much of the conservative media and by conservative politicians.

Jeb Bush, for instance, has said: “I hope I’m not going to get castigated for saying this by my priest back home, but I don’t get economic policy from my bishops or my cardinals or my pope.”

National Review has published such pieces as “Our Fallible Pope” and “The Left Has Its Pope.”

The Weekly Standard weighed in with “Pope Francis: Menace or Farce?”

Still, when you look at the sum total of his words and his actions, it is hard to politically pigeonhole this Pope. And the media coverage should reflect that.