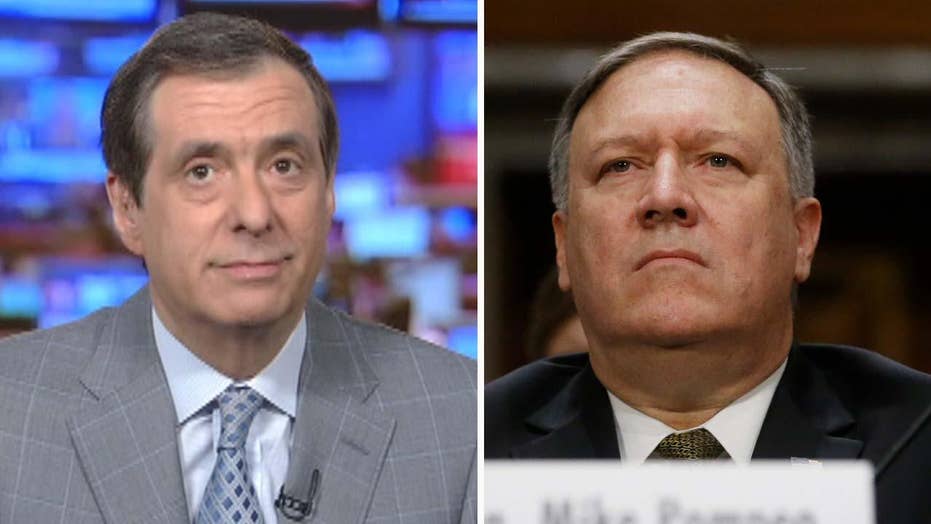 Kurtz: Inside the politics of blocking nominations

'MediaBuzz' host Howard Kurtz weighs in on the partisan politics by Democrats to vote against confirming CIA director Mike Pompeo as the next secretary of state to spite President Trump.

On paper, there is simply no question: Mike Pompeo is qualified to be secretary of State.

He was a member of Congress for a half-dozen years and has run the CIA for well over a year without any significant missteps.

In fact, 14 Senate Democrats—including Chuck Schumer and Dianne Feinstein—voted to confirm the Kansas lawmaker as the nation's top spymaster.

So the fact that his nomination as secretary of State is even in doubt pretty much boils down to politics. And that's why the Foreign Relations Committee narrowly approved the Pompeo nomination the Pompeo nomination yesterday on a party-line vote, made possible only because Rand Paul bowed to pressure from President Trump.

The Democrats don't really have a case against Pompeo, especially those who thought he'd be just fine as CIA director. It's their way of sticking it to Trump.

Does Pompeo have particularly extreme views? Has he shown he can't run a large organization? No. It's a way of striking a symbolic blow against the Trump foreign policy. This is nothing more than a proxy battle.

In fact, Pompeo appears to have deftly handled the secret assignment that most mirrors his potential promotion at Foggy Bottom: meeting with Kim Jong Un and laying the groundwork for a presidential summit on nuclear weapons.

Now I hasten to add that both sides on the Hill play plenty of politics with nominations. Merrick Garland was qualified for the Supreme Court, and Senate Republicans wouldn't even give him a hearing for a year—with candidate Trump's support.

I would argue that Pompeo is more qualified than Rex Tillerson, who had no government experience and no feel for politics despite his long tenure as Exxon-Mobil’s CEO.

There is a long Washington tradition of allowing a president to pick his own senior Cabinet members, unless the person is blatantly unqualified or marred by ethical concerns. But Democrats can counter that Trump has shattered many Beltway traditions.

Sarah Huckabee Sanders has ratcheted up the rhetoric by declaring, "Look, at some point, Democrats have to decide whether they love this country more than they hate this president." White House officials point to Republican support for the nominations of Hillary Clinton and John Kerry.

Trump took to Twitter to blame the Democratic opposition on "obstructionists."

Even the anti-Trump New York Daily News, while taking some potshots, says in an editorial that Pompeo should be confirmed because he "has solid knowledge of the world, the discipline to oversee complex diplomacy and — a double-edged sword, we admit — the trust of a president who seems to believe in almost no one."

Pompeo would have lost the committee vote if Paul, who objected to Pompeo's support of the Iraq war, hadn't flipped at the last minute, using as cover the claim that he's now been assured that the nominee agrees with Trump's opposition to the conflict.

With John McCain sidelined, the Republicans have only a 50-49 edge in the chamber. Only three Democrats are backing Pompeo so far – Heidi Heitkamp, Joe Donnelly and Joe Manchin, all facing reelection in red states. So he will likely wind up being confirmed by a vote or two.

Pompeo would have been the first nominee for the State Department's top job to be rejected in committee since votes started to be recorded in 1925. The last nominee voted down for a top Cabinet job was John Tower, whose bid to run the Pentagon was derailed by allegations involving conflict of interest, alcohol and women.

Critics who complain about Trump's lone-ranger approach to foreign policy should want a competent manager running the State Department bureaucracy and channeling the expertise of career diplomats. But that, of course, is not what yesterday’s vote was about.