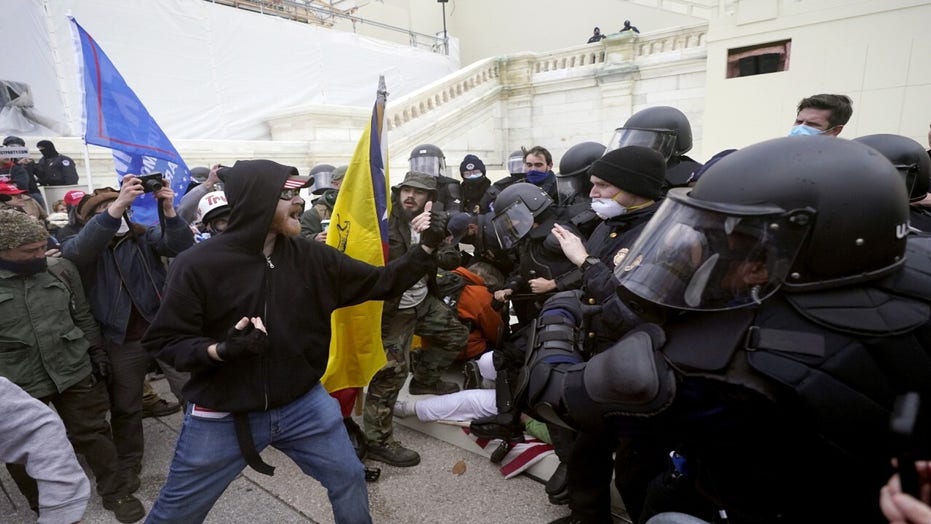 Pergram: Most significant breach of government institution since 1814

I remember when I walk through the Capitol Rotunda.

I remember when I walk through Statuary Hall.

I remember when I walk across the East Front of the U.S. Capitol.

The U.S. Capitol Building is seen from the U.S. Supreme Court Building on Dec. 29, 2021 in Washington, DC.  (Anna Moneymaker/Getty Images)

I remember when I enter the Speaker’s Lobby.

I remember when I pass by the narrow entrance to the West Front of the U.S. Capitol.

I remember when I walk through the Capitol crypt.

I remember when I walk up that Senate stairwell.

There are places scattered all about the U.S. Capitol which I recall for one reason or another. I stood in a dim, dusty Senate corridor, just feet away from former British Prime Minister Margaret Thatcher and former General Secretary of the Soviet Union Mikhail Gorbachev, en route to pay their respects to President Ronald Reagan, lying in state in the Capitol Rotunda.

Even the scene a few weeks ago, when late Senate Majority Leader Bob Dole, R-Kan., also lay in state in the Rotunda.

I recall those solemn scenes now when I pass through the Capitol Rotunda.

But now I remember something else.

And I always will.

Now I recall the sheer size of the mob marauding through the Capitol Rotunda. Amid the statues of George Washington and Martin Luther King. Between the paintings depicting Pocahontas and James Madison. I will remember the testimony at a Senate hearing of U.S. Capitol Police Officer Carneysha Mendoza, her skin seared by chemical agents after fighting the hooligans. Mendoza says her Fitbit revealed the struggle was so intense last Jan. 6 that it showed her "in the exercise zone for four hours and nine minutes" as they attempted to physically blockade the doors.

For years, I chased former House Speaker John Boehner, R-Ohio, former Rep. Charlie Rangel, D-N.Y., and a host of others across Statuary Hall for a comment or a quote. I recall Roger Daltrey of The Who performing an acoustical version of "Won’t Get Fooled Again" during a ceremony to dedicate a bust of Winston Churchill. I remember standing in Statuary Hall, speaking on the air live, as the House debated articles of impeachment for President Trump. Now I remember the vandals, parading through Statuary Hall en route to the House chamber.

FBI and ATF law enforcement push out supporters of President Trump as they protested inside the U.S. Capitol on Jan. 6, 2021, in Washington, DC.   (Brent Stirton/Getty Images)

I have entered the Speaker’s Lobby thousands of times over the years. Grabbing a quick comment from Rep. Jim Himes, D-Conn., as he emerged up the stairs. A remark from former Rep. Steve Driehaus, D-Ohio, shortly before the ObamaCare vote. Now I remember this is where Capitol Police Officer Michael Byrd shot and killed Ashli Babbitt as she attempted to vault a transom. This unfolded as a horde battered the doors of the Speaker’s Lobby with flagpoles and broke windows in an effort to swarm the House chamber.

I think of watching President Obama walk through the arcade entranceway leading to the West Front of the Capitol, moments from becoming president on Jan. 20, 2009. I remember former Sen. Alan Simpson, R-Wyo., walking me into his special Senate hideaway just steps from there shortly before he retired in early 1997. And in that place, I now think of the smoke. The tear gas. And the cries of Washington, DC Police Officer Daniel Hodges, nearly crushed in the doorway as the mob attempted to storm the building.

As I pass through the Capitol crypt, I’ll remember awaiting the late Sen. Daniel Inouye, D-Hawaii, step out of an obscure elevator after viewing deranged pictures of American troops torturing Iraqi prisoners at Abu Ghraib. Now I remember the chaotic video of officers engaged in hand-to-hand combat in the crypt as the statues of Samuel Adams of Massachusetts and Robert Sherman of Connecticut look on.

I remember when I walk up that Senate stairwell how I chased down former Sen. Tom Harkin, D-Iowa, for an interview after searching for him all day years ago. I remember hollering questions as U.S. Chief Justice John Roberts on that stairwell as he left the Capitol after attending President Trump’s State of the Union speech – in the middle of Mr. Trump’s first impeachment trial. Now I think of U.S. Capitol Police Officer Eugene Goodman baiting the hoodlums up those steps and distracting them so senators could evacuate the chamber through another corridor.

These are the things I remember now.

History has a curious way of festooning notoriety on the most obscure locations. The Texas Schoolbook Depository in Dallas. A field near Shanksville, Pa. An elementary school in Newtown, Conn. The Lorraine Motel in Memphis.

Supporters of President Trump protest inside the US Capitol on Jan. 6, 2021, in Washington, D.C.   (Brent Stirton/Getty Images)

The U.S. Capitol isn’t one of those places. History sweeps through the Capitol all the time. And it certainly did so on Jan. 6, 2021.

The riot is now part of the history of the Capitol. Burnished into the Doric columns right along with the tales of President Lincoln lying in state in the Rotunda. Vice President Truman sipping an afternoon cocktail with House Speaker Sam Rayburn, D-Texas - and then learning he was about to become President when FDR died. Lawmakers linking hands on the Capitol steps on 9/11 and spontaneously bursting out in a rendition of "God Bless America."

Good happens at the Capitol.

So does the bad.

I used to relish giving tours of the Capitol before the pandemic. It was one of the perquisites of the job having worked in the Capitol for years now. I love showing people the parts of the Berlin Wall which adorn the base of the statue of Reagan. I’d point out the golden tobacco leaves atop the columns near the mini-Rotunda. I’d show people the room where the House met to select Thomas Jefferson as President in 1801. It’s now the office of Senate Minority Leader Mitch McConnell, R-Ky.

I’m confident I will give tours again at some point.

And when I do, I’ll have a lot of other things in my repertoire to show people.

Things on the East Front. In Statuary Hall. On the edge of the Speaker’s Lobby.

It’s all part of the story now.

I remember these things because I was here on January 6.

And I hope you remember them, too.