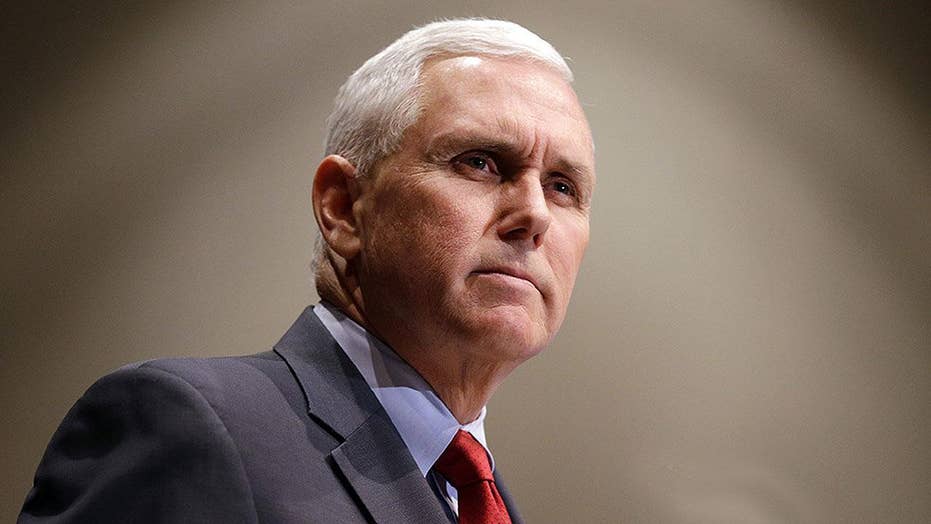 While Pence was flying over the Bering Sea, a North Korean missile exploded during launch on Sunday, U.S. and South Korean officials said.

Pence landed in South Korea at the start of a 10-day trip to Asia and was quickly confronted with the stakes facing the U.S. as Pyongyang seeks to flex its muscles around the birth anniversary of the country's late founder and advance the regime's nuclear and missile capabilities.

After arriving in Seoul, Pence placed a wreath at Seoul National Cemetery and then worshipped with military personnel at an Easter church service at the U.S. Army Garrison Yongsan. During a fellowship meal after the services, he said the tensions on the Korean peninsula had put into sharp focus the importance of the joint U.S.-South Korean mission.

"This morning's provocation from the North is just the latest reminder of the risks each one of you face every day in the defense of the freedom of the people of South Korea and the defense of America in this part of the world," said Pence, who was introduced by Army Gen. Vincent Brooks, commander of U.S. Forces Korea. "Your willingness to step forward, to serve, to stand firm without fear, inspires the nation and inspires the world."

Pence told the military members that he had spoken twice with President Donald Trump during the day.

Trump has suggested that the U.S. will take a tougher stance against North Korea, telling reporters last week: "North Korea is a problem. The problem will be taken care of." He has repeatedly said if China, North Korea's dominant trading partner, is unwilling to do more to pressure the North, the U.S. might take the matter into its own hands.

Along with the deployment of the Naval aircraft carrier and other vessels into waters off the Korean Peninsula, thousands of U.S. and South Korean troops, tanks and other weaponry were also deployed last month in their biggest-ever joint military exercises. That led North Korea to issue routine threats of attacks on its rivals if they show signs of aggression.

A White House foreign policy adviser told reporters aboard Air Force Two that the type of missile that North Korea tried to fire on Sunday was medium-range, and that it exploded about 4 to 5 seconds after it was launched.

According to the adviser, the test had been expected and the U.S. had good intelligence both before and after the launch. The adviser, who spoke on condition of anonymity to discuss the administration's initial understanding of the launch, said there was no expected response from the Trump administration because there was no need for the U.S. to reinforce the failure.

The official said that had it been a nuclear test, "other actions would have been taken by the U.S."

Despite North Korea's provocations, U.S. officials have said that the U.S. doesn't intend to use military force against North Korea in response to either a nuclear test or a missile launch.

After a two-month policy review, officials settled on a policy dubbed "maximum pressure and engagement," U.S. officials said Friday. The administration's immediate emphasis, the officials said, will be on increasing pressure on Pyongyang with the help of Beijing.

The officials weren't authorized to speak publicly on the results of the policy review and requested anonymity.

Pence's first trip to South Korea carries personal meaning as well. He noted to the soldiers that his late father, Edward, served in the U.S. Army during the Korean War and was awarded the Bronze Star on April 15, 1953 -- 64 years to the day of the vice president's departure for South Korea. Pence displays in his office his father's Bronze Star and a photograph of his father receiving the honor.