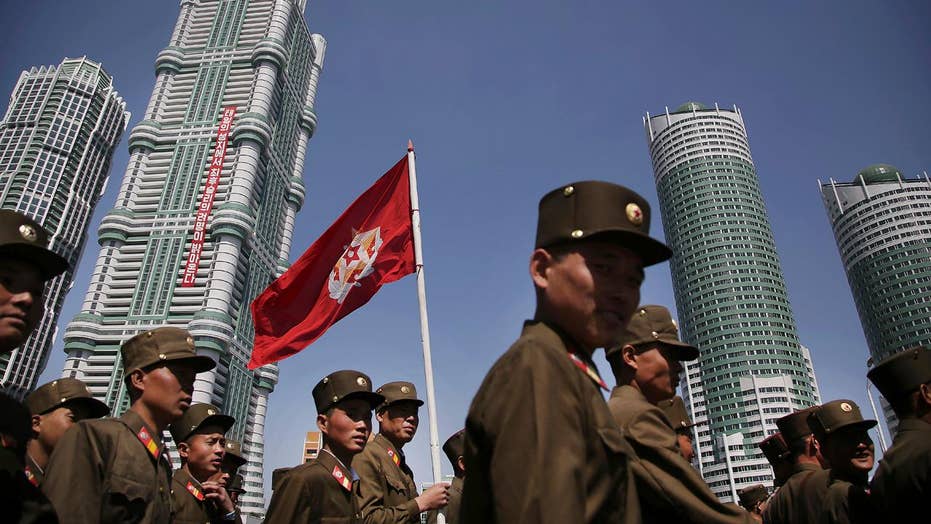 Greg Palkot reports on the latest developments out of North Korea

A North Korean missile fired from the east coast of the country Sunday “blew up almost immediately,” officials said.

The U.S. Pacific Command said the missile, which came near the city of Sinpo, “blew up almost immediately,” but the type of missile was still being assessed.

The failure came one day after Pyongyang celebrated one of the biggest propaganda events of the year – the 105th birthday of the late North Korea founder Kim Il Sung, Kim Jong Un’s grandfather.

The failed launch also comes ahead of Vice President Pence’s arrival in Seoul, South Korea for talks about how to handle Kim’s regime. Pence had been in contact with President Trump about the test.

Trump did not release a statement on the launch. Defense Secretary Mattis said Trump and his military team "are aware of North Korea's most recent unsuccessful missile launch. The president has no further comment."

Washington and Seoul were trying to determine what North Korea exactly launched. North Korea regularly fires short-range missiles, but it is also developing mid-range and long-range missiles meant to target U.S. troops in Asia and, eventually, the U.S. mainland. North Korea is thought to have a small arsenal of atomic bombs and an impressive array of short- and medium-range missiles.

Tensions on the Korean Peninsula have quickly risen over the last week as the U.S. and South Korean conduct it is largest-ever war games and while the USS Carl Vinson steams toward waters off the coast.

Another missile test from Sinpo failed earlier this month, when the rocket spun out of control and plunged into the ocean. That launch came shortly before Trump's first meeting with Chinese leader Xi Jinping. China is North Korea's only major ally.

The extended-range Scud missile in that earlier launch suffered an in-flight failure and fell into the sea off North Korea's east coast, according to U.S. imagery and assessments.

Despite Sunday's failure, the North's previous claim to have used "standardized" warheads has led to worries that it was making headway in its push to develop small and sophisticated warheads to be topped on long-range missiles.

Washington sees North Korea's pursuit of nuclear weapons and ballistic missiles as a threat to world security and to its Asian allies, Japan and South Korea. The United States, South Korea and other countries have vowed to apply more pressure on the North, but so far nothing has worked to stop Pyongyang's nuclear program.

Fox News’ Lucas Tomlinson and Jen Bowman and the Associated Press contributed to this report.