An adviser to House Speaker Nancy Pelosi, D-Calif., reportedly urged health policy groups to raise their concerns about “Medicare-for-all” proposals, just as the plan was beginning to be embraced by top 2020 Democratic presidential hopefuls.

NANCY PELOSI: JOE BIDEN IS NOT 'DISQUALIFIED FROM BEING PRESIDENT' BY RECENT ALLEGATIONS OF INAPPROPRIATE TOUCHING

Most top 2020 Democratic presidential candidates have backed a Medicare-for-all plan, with some proponents like Sens. Kamala Harris, D-Calif., and Bernie Sanders, I-Vt., embracing the possibility that it would end most private insurance plans.

But while Democratic leaders have pushed for further health care reform, Pelosi has shied away from a full embrace of a Medicare-for-all plan. In an interview with Rolling Stone in February, she said that it would not be “as good a benefit as the Affordable Care Act.”

“It doesn’t have catastrophic [coverage] -- you have to go buy it. It doesn’t have dental. It’s not as good as the plans that you can buy under the Affordable Care Act. So I say to them, come in with your ideas, but understand that we’re either gonna have to improve Medicare — for all, including seniors — or else people are not gonna get what they think they’re gonna get,” she said. “And by the way, how’s it gonna be paid for?”

As to the broader concept of a single-payer plan, she put the cost at $30 trillion and asked: “Now, how do you pay for that?”

According to Politico, Primus called Medicare-for-all an unhelpful distraction and expressed a need for more scrutiny of the policy implications. Some who attended the meeting said it left them with the impression that Democratic leadership wanted them to undermine the proposal.

“It came across as, we need this so we can get on with our agenda,” one person present told the outlet. “Can you help us point out the problems?” 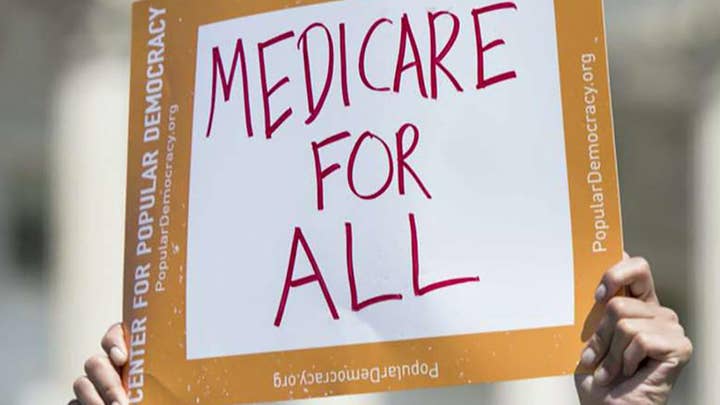 A Pelosi spokesman disputed that Primus was looking for a “one-sided analysis” of the proposal.

“Wendell absolutely did not ask for any kind of one-sided analysis of Medicare for All, and anyone who says otherwise wasn’t actually listening,” spokesman Henry Connelly said. “As Democrats, across the entire spectrum, we believe in legislating based on facts, data and honest analysis.”

Rep. Pramila Jayapal, D-Wash., who had introduced her own Medicare-for-all bill in the House, told Politico that if true, the remarks were disappointing.

“I will take it up with our leadership to make sure we’re not undermining members’ bills,” she said.

The revelation is likely to only fuel the division between the more centrist Democratic leadership and the growing far-left wing of Democratic freshmen, presidential candidates and other lawmakers.

Pelosi has in the past expressed doubt about liberal proposals such as the Green New Deal -- which she called “Green dream or whatever they call it,” although she has since praised the enthusiasm behind the ambitious push to tackle income inequality and climate change.

That tension was on display this week when Rep. Alexandria Ocasio-Cortez, D-N.Y., and Ayanna Pressley, D-Mass., criticized a policy by the Democratic Congressional Campaign Committee (DCCC) to blacklist political firms that work against sitting members of Congress.

Ocasio-Cortez called it “extremely divisive & harmful to the party” and recommended a pause in all donations to the DCCC.