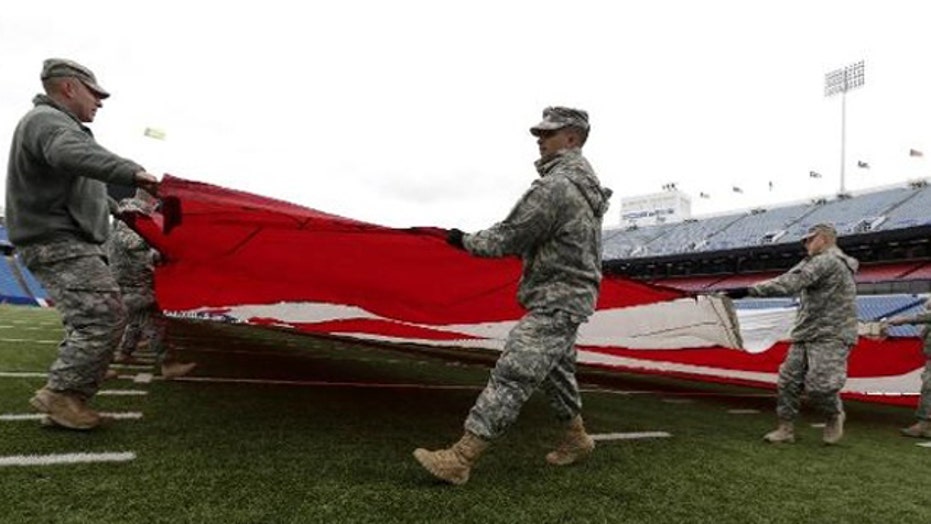 National Guard shelled out millions to 14 teams for soldier salutes

WASHINGTON – The Department of Defense and the National Guard are facing growing questions over why they spent millions of dollars on a promotional campaign to salute members of the military at professional football, baseball and basketball games around the country.

“So far everybody’s just shocked to learn that this, that these feel-good moments are paid for by the U.S. taxpayer,” Sen. Jeff Flake told FoxNews.com on Tuesday.

Across several sports leagues, the segments typically are aired at home games, paying tribute to a member of the military on the Jumbotron. After reports first surfaced of taxpayer money going toward these salutes, a defense official initially claimed Monday that the military pays for recruitment advertising in sports stadiums, but not such "outreach."

However, the New Jersey National Guard confirmed Tuesday that language in its contract with the New York Jets -- which play in New Jersey -- indeed includes the "Salute to Service" honor segment. Under the terms, during each of the Jets' eight home games in 2014, 40 soldiers would take the field in pregame ceremonies.

Federal contracts show that the U.S. Department of Defense from 2011 to 2014 paid $5.4 million for sponsorship deals with 14 NFL teams. The size of the deals, which cover recruitment and other areas, differ, with more than $1 million going to the Atlanta Falcons and $115,000 going to the New York Jets.

But Flake said Tuesday "it goes deeper than the NFL. ... There are contracts with soccer teams, big contracts in the past with NASCAR, NASCAR sponsorship.”

Flake, who called the spending wasteful and the honors disingenuous, argued paying for patriotism “leaves a bad taste in your mouth.”

“We’re hearing all kinds of numbers now with independent investigations and people who have viewed these contracts and so it’s a considerable amount of money, particularly at a time when the DOD is stretched considerably,” Flake said. “To find out money is being spent basically to honor people or salute doesn’t seem right.”

Flake, though, said he doesn’t blame the sports teams but instead blames the government for going about it the wrong way.

He said: “When everybody assumes when you have these feel-good moments, these salutes, that it’s because the NFL team just felt good about the military or about service and then to find out, no, it’s really the taxpayers paying for that. That just leaves you with an empty feeling.”

The New Jersey Army National Guard’s Recruiting and Retention Command defended the spending and said the agreements with sports teams helps educate and promote the military.

Aside from the Hometown Heroes segment, various agreements with teams include a kickoff video message from the National Guard, online advertising and digital marketing campaigns on stadium screens.