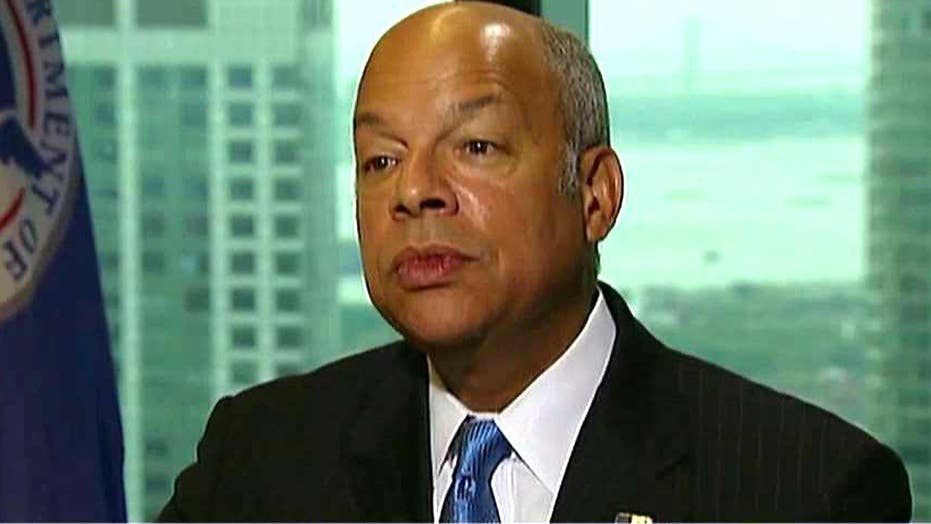 Homeland Security Secretary Jeh Johnson said Sunday, on the 15th anniversary of the Sept. 11 terror attacks, that the country is now safer against another such large-scale terror attack but acknowledged being “challenged” by lone radical Islamic terrorists -- with active FBI cases in all 50 states.

“Our government’s become pretty good at detecting and preventing something hatched from overseas,” Johnson told “Fox News Sunday” from the World Trade Center memorial in New York City. “We’re better than we were 15 years ago. Where we’re challenged, however, is the lone wolf-style attack.”

Johnson acknowledged the persistent threat of the Islamic State terror group, including the FBI having active investigations in all 50 states and FBI Director James Comey saying last year that law-enforcement agencies have more than 900 active investigations against individuals suspected of supporting the group.

“You’re right,” said Johnson, while arguing that the U.S. military and its allies have taken back ISIS-controlled territory in Iraq and Syria and have taken out several of the terror group’s leaders.

He also said he has instructed officials along the United States’ southwest border to increase their focus on people from other parts of the globe to prevent domestic terror attacks.

“We’re seeing illegal migrants coming from Africa, coming from the Middle East,” Johnson told Fox News. “And we’re doubling down on preventing that from happening before they even reach the southwest border.”