EXCLUSIVE -- Scherie Murray, a New York businesswoman who immigrated from Jamaica as a child and is active in state Republican politics, is launching a campaign Wednesday for the congressional seat held by Democratic Rep. Alexandria Ocasio-Cortez, Fox News has learned.

In a phone interview, Murray, 38, confirmed her intention to run for the New York congressional seat as a Republican.

TRUMP FIRES BACK AT SQUAD, CHALLENGES HOUSE TO ‘REBUKE’ THEM FOR ‘FILTHY AND HATE LACED’ LANGUAGE

“There is a crisis in Queens, and it’s called AOC,” Murray told Fox News. “And instead of focusing on us, she’s focusing on being famous. Mainly rolling back progress and authoring the job-killing Green New Deal and killing the Amazon New York deal.”

Murray, who was born in Jamaica and moved to the United States when she was 9, is officially launching her campaign Wednesday with an introductory video that takes sharp jabs at the 29-year-old Ocasio-Cortez.

'There is a crisis in Queens, and it’s called AOC.'

“Your representative in Washington chooses self-promotion over service, conflict over constituents, resistance over assistance," Murray said in the video. "Queens and the Bronx needs someone who will create jobs instead of turning them away."

Asked about Ocasio-Cortez’s brand of Democratic socialism, Murray said, “I think it’s far, far to the left and it is not connecting with everyday Americans.”

As for "Medicare-for-all," which Ocasio-Cortez has embraced, the Republican said: “Medicare-for-all, I think a lot of people are happy with their current health insurance.” And on the Green New Deal, the left-wing proposal to address climate change pushed by Ocasio-Ortez, she said: “We know that it certainly will kill jobs.”

Whichever Republican candidate emerges from the primary field will face a steep uphill climb in the overwhelmingly Democratic district. But Murray and others are looking to paint Ocasio-Cortez as more of a celebrity than a lawmaker, while stressing their ability to work across party lines.

Murray's new campaign video, which doesn’t mention President Trump or the Republican Party, portrays Murray as a bridge-builder. She is a former state committeewoman of the New York State Republican Party.

Former high school government teacher and police officer John Cummings says the Democrat's surprise primary win inspired him to make his own run for the New York House seat as a Republican.

Asked during the interview if she considers herself a Trump supporter, she said “yes.” She said she is in the process of talking with national Republicans about her campaign, including South Carolina Sen. Tim Scott, a prominent black Republican in Congress.

She expressed disgust over the recent spat between Trump and Ocasio-Cortez and her allies. Trump has taken heat for telling Ocasio-Cortez and other minority progressives to "go back" to where they came from – provoking accusations from Democrats that Trump's comments are racist.

“I think it’s disgusting, to be quite honest,” Murray said of the controversy, without specifying which part of it disgusts her. “I think we are missing the point of why we’re elected to public office: to legislate on policy, to deliver results to those kitchen table issues that are affecting everyday Americans.”

Murray later clarified her thoughts on the back-and-forth, saying of Trump's tweet, "Is that how I would have worded it? No. Do I think the president is a racist? No." She added, "But I want to get back to the core of why we’re even talking about this – there is a crisis at our border."

Murray, who grew up in Southeast Queens and worked for the city’s Jamaica Bus Depot as a teenager, founded a television production and advertising company called The Esemel Group in 2004. She said her business generated employment for minorities in New York City. She said she no longer works for the company and is now a full-time mother.

The GOP primary will take place in June 2020. 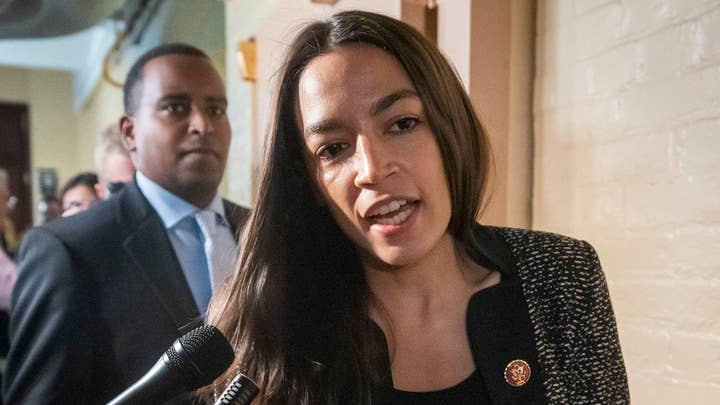 Winning a general election in New York’s 14th congressional district would be a long shot for any Republican: In 2018, Ocasio-Cortez’s GOP opponent, Anthony Pappas, won just 14 percent of the vote.

But Murray still insists a Republican could win – even in a Democratic-controlled district – because of dissatisfaction with Ocasio-Cortez.

“A Republican can win the district,” she said. “There is an absolute path to victory when you look at a general election campaign.”