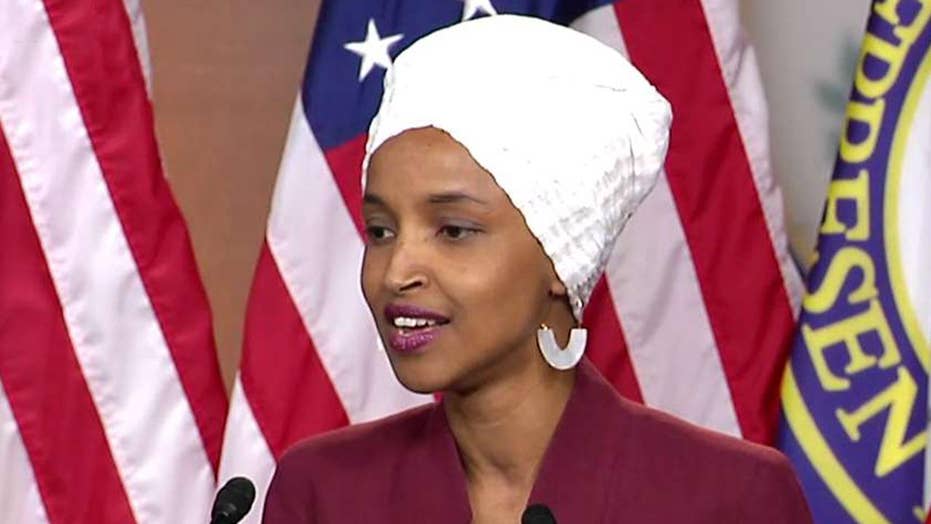 In spirited remarks tinged with open animosity, Rep. Ilhan Omar, D-Minn., standing side-by-side with Reps. Alexandria Ocasio-Cortez, Ayanna Pressley and Rashida Tlaib, declared at a news conference Monday on Capitol Hill that "it is time for us to impeach this president" for "openly violating" his constitutional oath.

"The eyes of history [are] watching us" in this "pivotal moment," Omar said.

The dramatic moment came just hours after Trump forcefully doubled down on his explosive call this weekend for progressive congresswomen to "go back" to where they came from and "come back and show us how it's done," rather than criticize the Trump administration. He also demanded they "apologize" for what he called their apparent anti-American "hate."

In personal terms, Omar rejected Trump's rhetoric and outlined a list of grievances she said were disqualifying.

Trump, in fact, had called those who kneel during the national anthem "sons of bit--es," not black athletes generally. And his comments concerning "sh--holes" referred to places, not individuals.

Pressley, speaking just before Omar, repeatedly derided President Trump as "the occupant of the White House" and said he was seeking to "marginalize and silence" the women. 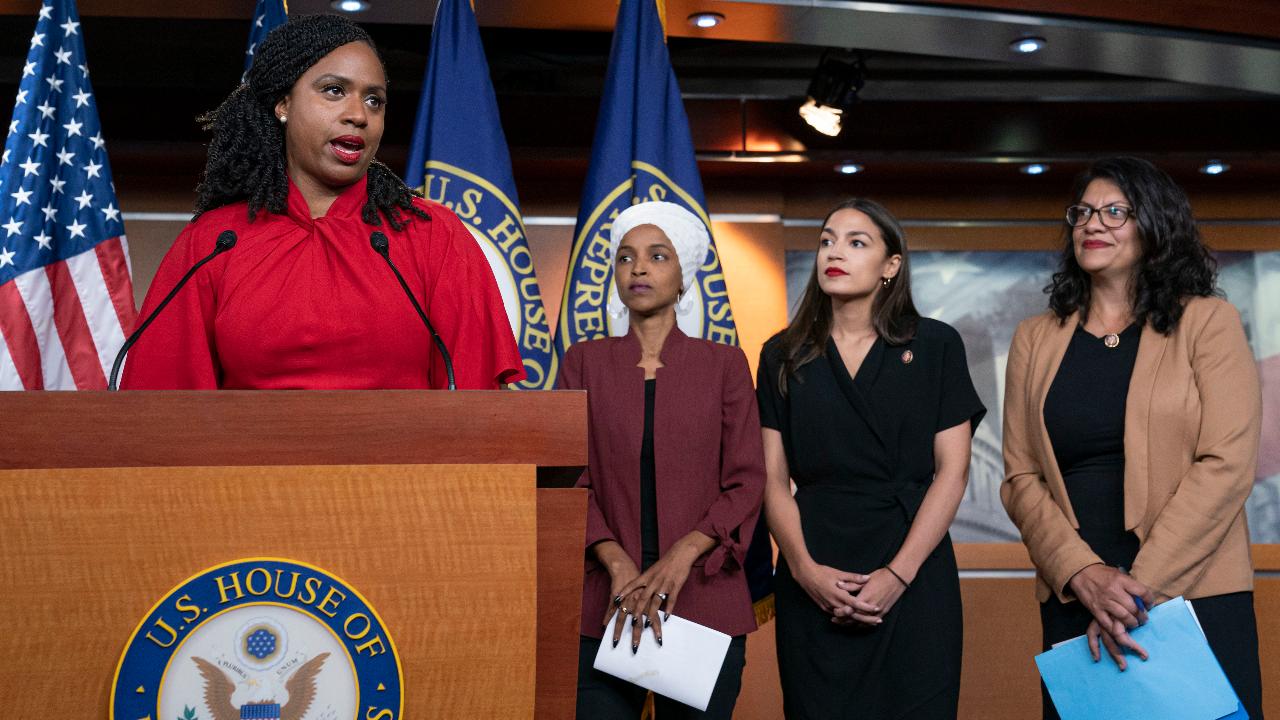 But she then issued a call for calm that appeared to go unheeded: "I encourage the American people and all of us, in this room and beyond, to not take the bait," Pressley said, calling the situation a "disruptive distraction."

Instead, Omar asserted that the U.S. had a "long way" to go until it could live up to its founding values. She repeated unsubstantiated allegations that people were drinking from "toilets" in immigrant detention centers. U.S. officials have contested those claims fiercely.

"Right now, the president is committing human rights abuses at the border," Omar said, before saying Trump has been "credibly accused" of criminal conduct, including colluding with a foreign adversary. Special Counsel Robert Mueller's lengthy probe concluded earlier this year, finding no evidence that the Trump team in fact conspired with Russia to influence the 2016 election, despite several outreach efforts by Russian actors.

Omar also slammed Trump for keeping children in "cages" -- prompting Trump to tweet, minutes after the news conference, that illegal-immigrant children were photographed in cages under the Obama administration.

Trump added that he wanted to fix the "BAD IMMIGRATION LAWS" that have led to poor border conditions and overcrowding.

Asked by a reporter to respond directly to Trump's insinuations that she is a pro-terrorist communist, Omar said, "every single Muslim who has lived in this country and across the world has heard that comment, and so I will not dignify it with an answer."

Omar previously has been criticized by prominent members of both parties for making remarks widely deemed anti-Semitic. This past March, the Democrat-led House overwhelmingly passed a bipartisan resolution that indirectly condemned Omar's repeated 'anti-Semitic' and 'pernicious' comments, including some in which she suggested Jewish politicians in the U.S. were bought and paid for.

Ocasio-Cortez added that Trump did not "operate in good faith," repeating an ill-defined attack commonly employed by activists on social media.

"Weak minds and leaders challenge loyalty to our country in order to avoid challenging and debating the policy," Ocasio-Cortez said. "This president does not know how to make the argument that Americans do not deserve health care. He does not know how to defend his policies, so what he does is attack us personally."

She added a message she said was for the country's children: "No matter what this president says, this country belongs to you, and it belongs to everyone." 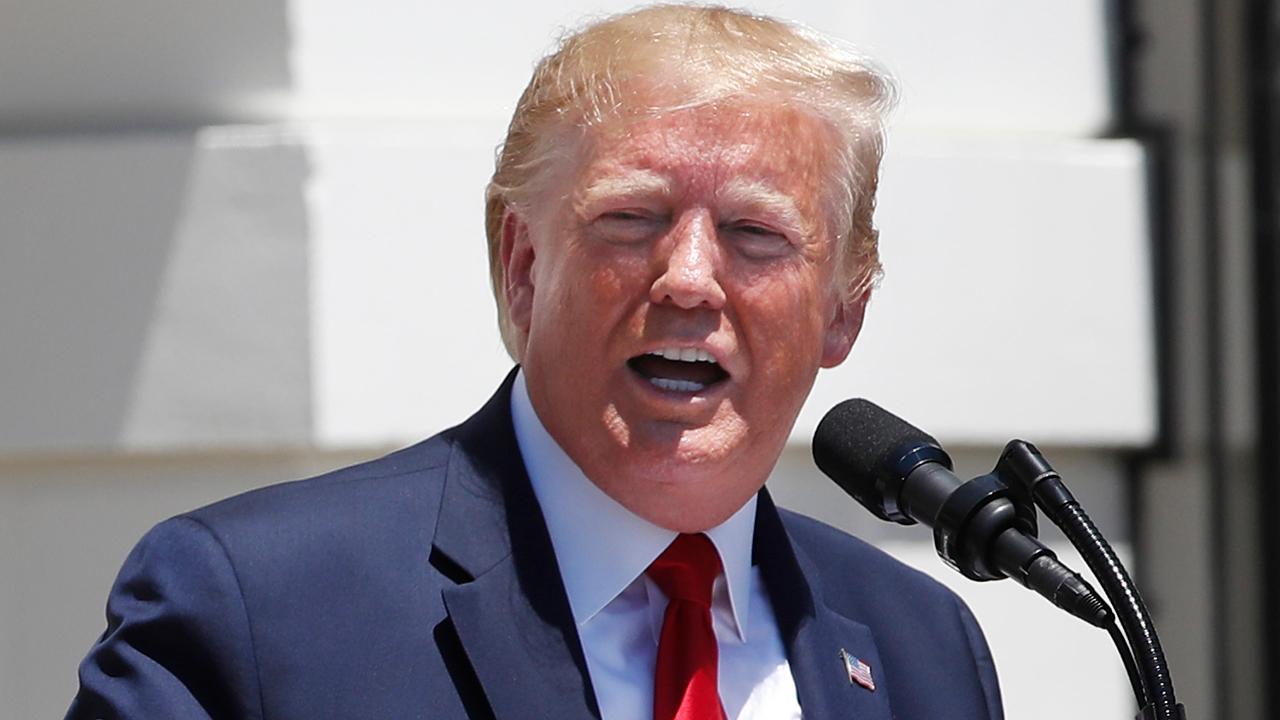 Trump: Progressive Democrats hate this country with a passion, they can leave if they want to

President Trump defends his tweets calling on Democratic congresswomen to 'go back' to where they came from during an exchange with the press at the White House.

Pressley, however, largely focused on other matters.

"At the end of the day, if we improve the conditions of children in a cage, they are still in a cage," Pressley said. "This is simply a disruption and a distraction from the callous, chaotic, and corrupt culture of this administration all the way down. We want to get back to the business of the American people, and why we were sent here."

Members of the so-called progressive "squad" have feuded bitterly with top House Democrats in recent days, leading some observers to allege that House Speaker Nancy Pelosi's attacks on the freshmen progressives have emboldened Trump.

But, leading up to Monday evening's news conference, the weight of the party establishment was firmly behind the four members of Congress -- united, with all hands on deck, in attacking Trump's comments. Pelosi announced Monday the House would take up a resolution to condemn the president's "xenophobic tweets."

Speaking to Fox News late Monday, Pelosi said the resolution "hopefully" would be on the House floor Tuesday for a vote. A draft was being discussed in the Rules Committee as of 9:15 p.m. ET Monday, and was later formally scheduled for a floor vote Tuesday night.

Just minutes before the representatives were set to take the stage, Trump invoked Omar's infamous casual reference to the 9/11 terrorist attacks as an instance in which "some people did something" -- and renewed his calls for anti-American individuals to leave the country.

"We will never be a Socialist or Communist Country," Trump wrote. "If you are NOT HAPPY HERE, YOU CAN LEAVE!"

Trump added that some people "HATE our Country," and are "anti-Israel, pro Al-Qaeda, and comment on the 9/11 attack, 'some people did something.'"

The progressive women offered a preview of their response over the weekend on social media. Tlaib, D-Mich., tweeted that Trump "needs to be impeached" and called him "a lawless & complete failure of a President."

Omar, meanwhile, accused Trump of "stoking white nationalism" and added, "As Members of Congress, the only country we swear an oath to is the United States. Which is why we are fighting to protect it from the worst, most corrupt and inept president we have ever seen."

Pressley, D-Mass., wrote: "THIS is what racism looks like. WE are what democracy looks like. And we’re not going anywhere. Except back to DC to fight for the families you marginalize and vilify everyday."

Ocasio-Cortez, D-N.Y., penned the most lengthy denunciation of Trump's comments, asserting, "On top of not accepting an America that elected us, you cannot accept that we don’t fear you, either. You can’t accept that we will call your bluff & offer a positive vision for this country. And that’s what makes you seethe."

She added: "Mr. President, the country I 'come from,' & the country we all swear to, is the United States. But given how you’ve destroyed our border with inhumane camps, all at a benefit to you & the corps who profit off them, you are absolutely right about the corruption laid at your feet."

Although Trump implied over the weekend they were born elsewhere, three of the four progressive congresswomen were in fact born in the United States. Omar, D-Minn., the first Somali native elected to Congress and one of its first Muslim women, was born in Somalia but spent much of her childhood in a Kenyan refugee camp as civil war tore apart her home country. 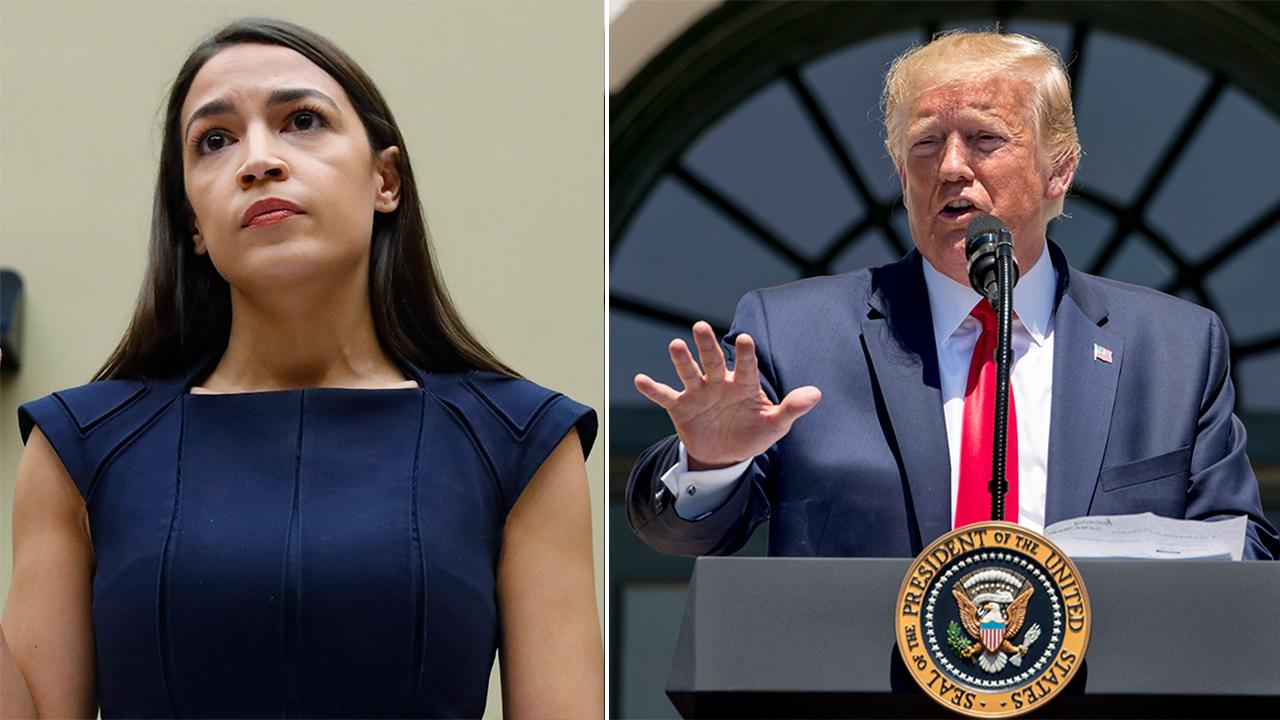 Trump vs. progressive Democrats: Can anyone come out a winner?

As the president doubles down on criticism of progressive Democrat congresswomen, the 'Outnumbered' panel debates the optics of the war of words.

Tlaib, the first Palestinian-American woman in Congress, was born in Detroit. Pressley, the first black woman elected to the House from Massachusetts, was born in Cincinnati. Ocasio-Cortez, who is of Puerto Rican descent, was born in the Bronx, N.Y., and raised in suburban Westchester County.

He continued: "These are people that hate our country. ... They hate it, I think, with a passion."

Trump additionally claimed that the freshmen lawmakers "hate America" and said that Omar, who has been accused of making anti-Semitic remarks by members of both parties, in particular "hates Jews."

The president also warned Democrats against letting them influence their direction: "If they want to gear their wagons around these four people, I think they're going to have a very tough election."

Trump's original tweets had said "Democrat Congresswomen" should go back and fix the "corrupt" and "crime infested places" they came from and then "come back and show us how it's done."

Rep. Rashida Tlaib, D-Mich., listens during a House Oversight and Reform Committee meeting, on Capitol Hill in Washington, Tuesday, Feb. 26, 2019. House Democrats are rounding the first 100 days of their new majority taking stock of their accomplishments, noting the stumbles and marking their place as a frontline of resistance to President Donald Trump. (AP Photo/J. Scott Applewhite)

Several Republicans have stood by the president. South Carolina GOP Sen. Lindsey Graham, for example, told "Fox & Friends" that the progressive representatives are a "bunch of communists," and charged that Omar is plainly anti-Semitic.

“They accuse people who support Israel as doing it for the benjamins, they are anti-Semitic, they are anti-America. Don’t get them—aim higher," Graham added. (In his press conference Monday, Trump apparently interpreted Graham as saying he should target senators, as opposed to mere congresswomen.)

But in a statement late Monday, Romney clarified that he felt Trump had crossed a line.

"The president’s comments were destructive, demeaning, and disunifying," Romney said. "The President of the United States has a unique and noble calling to unite the American people – of all different races, colors, and national origins. In that respect, the president failed badly. People can disagree over politics and policy, but telling American citizens to go back to where they came from is over the line.”