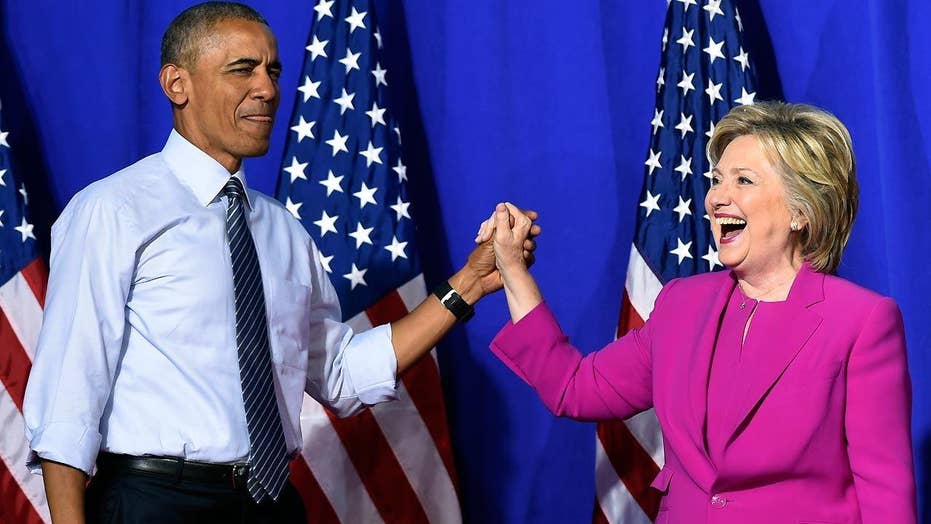 Obama: I know Hillary Clinton can do the job

President campaigns for the first time with the presumptive Democratic presidential nominee in Charlotte, North Carolina

President Obama made his debut appearance on the campaign trail for Hillary Clinton Tuesday in swing state North Carolina -- touting the presumptive Democratic presidential nominee’s decades of political experience and her potential to help working-class Americans and “make us proud around the world."

“The fact is, Hillary Clinton is steady and true,” Obama told the crowd inside the Charlotte Convention Center. “And she’s been in politics for the same reason I have: to make peoples’ lives better. … I’m ready to pass the baton, and I know Hillary Clinton can take it.”

Clinton and Obama appeared together just hours after FBI Director James Comey said Clinton was “extremely careless” in her use of a private email server while secretary of state but that the agency would not recommend criminal charges in the case.

“Comey let Clinton off the hook,” Trump said in one of two statements. “The fix was final. The Obama administration's anointed successor has had an indictment removed from her path and will now be able to glide to the rigged Democrat nomination.”

Clinton, who spoke in North Carolina from behind a lectern with the official presidential seal, didn’t mention the server case, which has hung over her campaign.

She instead touted a plan for middle-class prosperity that included increasing the federal minimum wage, debt-fee college and an economy in which “Wall Street and the super-rich pay their fair share of taxes.”

“We need an economy that works for everyone, not just those at the top,” said the former first lady and U.S. senator from New York, vowing if elected the biggest investment in good-paying jobs since WWII.

“It’s just plain wrong that a millionaire can pay as much taxes as his secretary,” she added.

Obama won North Carolina when elected president in 2008 but narrowly lost the state in 2012 to GOP challenger Mitt Romney.

Clinton leads Trump in North Carolina by less than 1 percentage point, according to the RealClearPolitics poll average.

Obama and Clinton were scheduled to make their first joint appearance of the 2016 campaign last month in swing state Wisconsin but canceled in the aftermath of the mass shooting at an Orlando nightclub.

The Obama-Clinton stop marked a new chapter in their political relationship, which started when they were senators, then evolved as rivals in the 2008 Democratic primary and Clinton then becoming Obama’s secretary of state in 2009.

“We may have gone toe-to-toe, but we stood shoulder-to-shoulder on our values,” Obama said about the race. “For as much as I admired her in the Senate, I came away from the primary admiring her even more. … I believe in Hillary Clinton. And I want you to help make her the next president of the United States.”

Clinton and Obama traveled to the North Carolina event together on Air Force One, to which Trump objected.

"Why is President Obama allowed to use Air Force One on the campaign trail with Crooked Hillary?" the first-time candidate tweeted this past weekend. "Who pays?"

Presidents always fly on Air Force One, no matter the purpose of the trip. Political committees are required to contribute to the cost of a president's campaign-related travel, though a portion of such costs is borne by taxpayers, too.

"As is the standard practice, the campaign will cover its portion of the costs," Clinton spokesman Nick Merrill said.

Clinton aides said they're confident they could deploy Obama in any of the roughly eight battleground states, though they think he'll be particularly effective in rallying young people, as well as black and Hispanic voters, and will be instrumental in voter registration efforts.

Still, the president issued several shots at Trump, saying, “If your concern is working–class people, this is not your choice.”

However, Obama won't spend the next four months as the "Trump-troller in chief," as one official put it.

Obama’s narrow North Carolina victory in 2008 made him the first Democratic presidential candidate to win the state since 1976.

His campaign aggressively registered more young people and black voters, and he drew support from moderates in the booming suburbs of Charlotte and Raleigh-Durham.

The president was eager to cement Democrats' strength in North Carolina during his re-election campaign, even holding the party’s convention in Charlotte. But he was dogged by a sluggish economy and disappointment among some swing voters.

The White House race in North Carolina could also have a more far-reaching impact on Washington.

Sen. Richard Burr, one of just a few Washington Republicans to endorse Trump, is in a tough re-election bid against former state Democratic lawmaker Deborah Ross. Washington Democrats have increasingly targeted him for defeat, and a GOP loss would be key in Democrats’ efforts to retake the Senate.