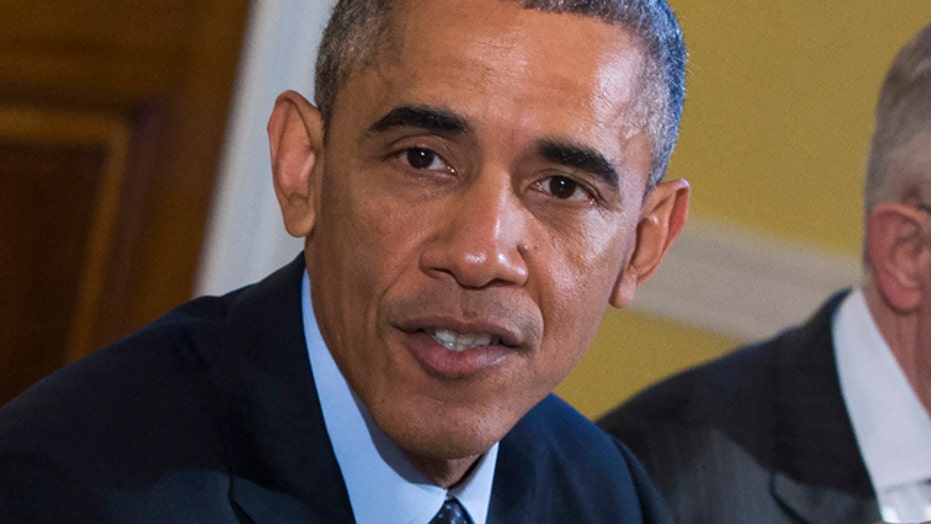 Obama: I'll judge ideas based on whether they work

Somber-looking congressional leaders tried Friday to put the nastiness of the midterms behind them and sit down for a civilized conversation over lunch with President Obama about getting something done over the next two years.

Whether they can is an open question.

Republican and Democratic leaders emerged from a lunch of herb-crusted sea bass and endive salad at the White House Friday afternoon with a mixed message. GOP leaders -- after having been handed control of Congress by the voters on Tuesday -- sounded an optimistic note about the next session.

At the same time, they warned that the president could sour the mood if he plows ahead with executive action on immigration, as he has vowed to do. The Associated Press reports that Republicans confronted Obama over the move at the White House meeting. One GOP aide told the AP that as House Speaker John Boehner was making an argument on immigration, Obama responded that his patience was running out. Vice President Joe Biden interrupted to ask how long Republicans needed and Obama angrily cut Biden off, the aide said (though other sources disputed that characterization to Fox News).

"Unfortunately the president's promise to unilaterally go around Congress ignores the message voters sent on Election Day," Sen. John Cornyn, R-Texas, said in a statement after the meeting. "It is my sincere hope that he will reverse course and work with us -- not around us -- to secure the border and achieve real reforms to our immigration system."

Democratic leaders, meanwhile, downplayed their own midterm drubbing. House Minority Leader Nancy Pelosi denied that Tuesday's election was a "wave," claiming, rather -- "it was an ebb."

It's been a while since this cast of political characters convened at the White House. The midterm season saw them sharply at odds.

At the top of the meeting, Obama pledged to judge ideas not by whether they come from Democrats or Republicans but by "whether or not they work."

At the end of the meeting, at least some of the attendees were seen leaving holding small brown bags with a White House seal. Multiple sources confirmed to Fox News they held bottles of White House beer.

The dynamic in Washington, on the heels of Republicans' midterm gains, remains volatile. Both sides claim to be interested in working together, yet Obama's immigration vow is rankling the GOP.

"He's going to burn himself if he continues to go down this path," Boehner said Thursday.

If the bipartisan spirit dissipates, frustrated voters could see another two years of gridlock, with little progress toward tackling the soaring national debt, boosting the economy and more.
Obama and congressional leaders have had these kinds of meetings before. But Washington's power structure is changing.

Senate Majority Leader Harry Reid, D-Nev., Obama's failsafe for his first six years in office, is about to lose his grip on the upper chamber. McConnell of Kentucky is riding a wave of electoral success into the top job. Boehner, R-Ohio, is carrying himself with renewed confidence after padding his majority, while Pelosi presides over a diminished minority.

If history is any gauge, there's an opening -- at least before 2016 politics consume Washington -- for compromise. The Clinton-Gingrich era brought welfare reform. President George H.W. Bush worked with a Democratic Congress to pass the Americans with Disabilities Act of 1990. President Richard Nixon even worked with a Democratic Congress on significant environmental legislation and regulation.

In the hours after voters delivered their verdict, both Obama and McConnell waxed optimistic about the potential to find common ground, despite the rancor and wide ideological gulf that has undermined such cooperation in the past. Both parties cited dense issues like patent laws and tax reform where Obama and Republicans see at least partially eye to eye.

"I'm sure there will be plenty of things for us to disagree about," White House spokesman Josh Earnest said Thursday. "But if there's an opportunity for us to find some common ground, let's make sure that our differences don't get in the way of us being able to make some progress for the American people."

But bipartisan aspirations to find ways to work together were quickly tempered as it became clear that the same thorny issues that divided Democrats and Republicans before the election will only be more likely to erupt once Republicans can push legislation through both chambers and to Obama's desk unimpeded by Senate Democrats.

McConnell vowed renewed efforts next year to chip away at Obama's health care law -- his signature legislative achievement from the brief era just after his election when Democrats controlled both the House and Senate. Republicans in both chambers put Obama on notice they plan to twist his arm on the long-delayed Keystone XL oil pipeline that the GOP wants approved.

As part of Friday's session, Obama invited Gen. Lloyd Austin of U.S. Central Command, who heads American military operations throughout the Middle East, to brief lawmakers about the U.S.-led fight against the Islamic State group. In one of his first requests to Congress after the election, Obama announced he would seek new authorization from Congress for the mission.