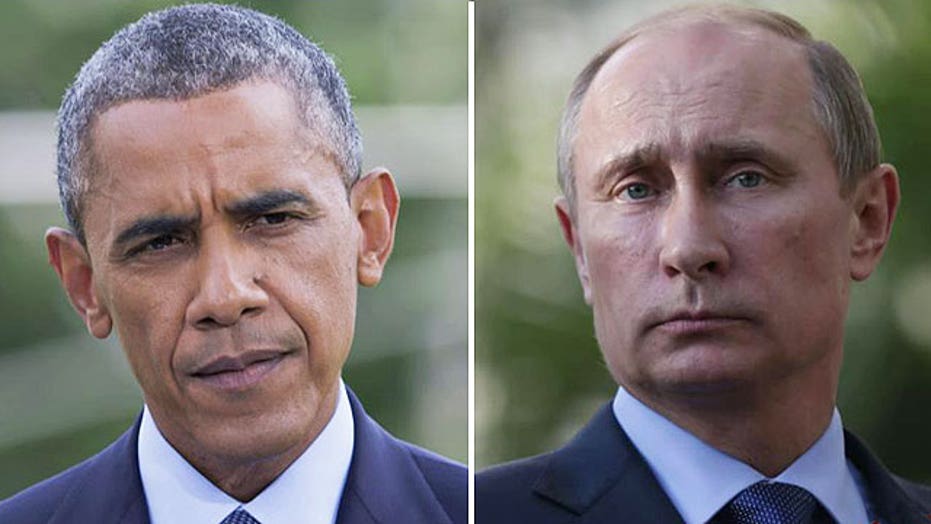 Obama warns if Russia continues its aggressive actions in Ukraine, the costs for Russia will rise

President Obama confirmed Monday that his administration is weighing the possibility of sending arms to Ukraine to help the country beat back Russian-backed separatists, if diplomacy fails.

The comments came during a joint press conference with German Chancellor Angela Merkel, following a meeting between the two leaders at the White House.

Merkel and French President Francois Hollande have been pushing a peace plan and have planned a summit later this week with the leaders of both Russia and Ukraine. Obama appears to be giving those talks space to play out, stressing Monday that, "We continue to encourage a diplomatic resolution to this issue."

But, confirming what officials previously had indicated to be the case, Obama said lethal military aid is on the table.

"It is true that if in fact diplomacy fails, what I've asked my team to do is look at all options," Obama said. "The possibility of lethal defensive weapons is one of those options that's being examined."

Obama added that he has not yet decided whether to approve such a plan.

The question of whether to provide lethal military support to Ukraine represents a potential split between Obama and Merkel. The White House has said Obama is reconsidering his opposition to arming Ukraine given a recent surge in violence, while Merkel has adamantly opposed such steps. The U.S. and Europe have largely been in lockstep in their response to the conflict between Russia and Ukraine, raising the prospect that the public divide on lethal aid was merely a tactic to push Russian President Vladimir Putin to accept a peace plan.

Obama did not elaborate on how seriously he's considering providing lethal military aid. The president said officials would consider the risks of the aid falling into the wrong hands and other scenarios, and ultimately would weigh the question: "Is it more likely to be effective than not?"

Obama stressed that Russia's military might would make the prospect of Ukraine beating back the Russian army "unlikely" in an all-out conflict. He said the international approach so far has been to "ratchet up the costs" on Russia for its aggression. "Russia has paid a significant cost," Obama said, adding, "It has not yet dissuaded Mr. Putin from following the course that he is on."

Obama said he hopes that sanctions will lead Putin to opt for a diplomatic resolution. Obama said he wouldn't "prejudge" whether that will be successful.

Merkel, for her part, reaffirmed that she sees no military solution to the fighting in eastern Ukraine. However, she added that no matter what Obama decides, "the alliance between the United states and Europe will continue to stand, will continue to be solid."

Merkel and Hollande met with Putin and Ukrainian leaders last week and announced a new summit meeting for Wednesday in Minsk. The United States will not be at the table when French and German leaders meet with Ukrainian President Petro Poroshenko and Putin in an attempt to breathe life into a much-violated September peace plan.

The European Union decided Monday to temporarily hold off on slapping more sanctions on Russians and Ukrainian separatists while awaiting the outcome of the peace talks.

The meeting in the Belarusian capital takes place with Merkel and Hollande deeply opposed to arming Ukraine in its bid to push back the separatists that NATO and the United States insist are being armed by Russia, which also has troops fighting in the eastern Ukraine. The White House has let it be known that Obama, who had resisted calls to send arms, was now considering doing just that.

Obama stressed Monday that Russia's sustained intervention in eastern Ukraine has only "reinforced the unity" of the U.S. and its allies

He said it's clear the Russians "violated just about every commitment they made" in a recent agreement. He added, "If Russia continues on its current course ... Russia's isolation will only worsen both politically and economically."

At the Munich Security Conference over the weekend, Vice President Joe Biden stopped short of explicitly addressing possible arms deliveries. "We will continue to provide Ukraine with security assistance not to encourage war, but to allow Ukraine to defend itself," he said.

More than 5,300 people have been killed since fighting began in April, according to a U.N. tally, and the bloodshed has markedly increased over the past two weeks.

On Monday, a powerful explosion rocked a chemical plant and set it on fire outside the separatist stronghold of Donetsk in eastern Ukraine. Rebels said the plant was hit by government shelling.