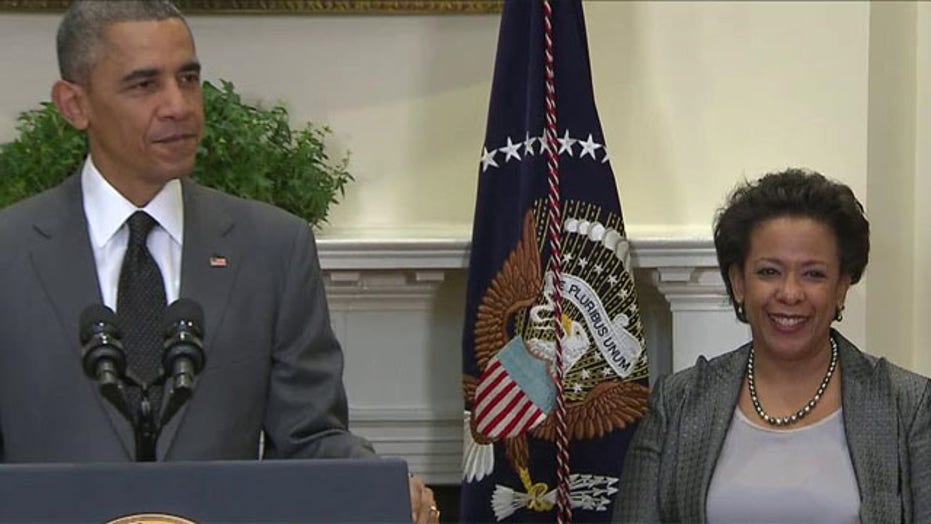 President Obama, in nominating New York federal prosecutor Loretta Lynch on Saturday to be the country’s next attorney general, called her the most qualified public servant for the job. However Lynch will still face a difficult confirmation process in Congress.

Republicans have already told the White House that pushing any nominee through Congress while Democrats still have control of the Senate will be difficult and politically damaging.

Republicans want to oversee Lynch's confirmation in the next Congress, after taking control Tuesday of the upper chamber.

“It’s pretty hard to be more qualified for the job than Loretta,” Obama said.

Lynch, 55, is a Harvard Law School graduate and popular prosecutor who is currently serving her second stint as the U.S. attorney for eastern New York, which covers Brooklyn, Queens, Staten Island and Long Island.

“No one gets to this place -- this room, this podium this moment -- by themselves,” Lynch said Saturday in thanking the president, Holder, her New York colleagues, family and others.

“I will wake up every morning with the protection of the American people my first thought,” said Lynch, who must be confirmed by the Senate to get the job.

Sen. Ted Cruz, R-Texas, who sits on the Senate Judiciary Committee, which holds the confirmation hearings, has already indicated that he is unhappy that Obama is making the nomination now, instead of during the new session, when Republicans will have the majority in both chambers.

“Democrat senators who just lost their seats shouldn't confirm (a) new attorney general,” he tweeted on Friday, after news surfaced that Lynch would officially be nominated Saturday. “(They) should be vetted by (the) new Congress.”

Still, Holder express confidence on Saturday for Lynch and that she would be confirmed.

“Loretta Lynch is an extraordinarily talented attorney, a dedicated public servant, and a leader of considerable experience and consummate skill,” he said. “I am certain that she will be an outstanding attorney general, and I am delighted to join President Obama in congratulating her on this prestigious appointment.”

"U.S. attorneys are rarely elevated directly to this position, so I look forward to learning more about her, how she will interact with Congress, and how she proposes to lead the department," Grassley said. "I'm hopeful that her tenure, if confirmed, will restore confidence in the attorney general as a politically independent voice for the American people."

Senate Minority Leader Mitch McConnell, R-Ky., who presumably will become the majority leader in the next session, issued a statement Friday night urging the Senate to wait until January to vote on the nomination.

"Ms. Lynch will receive fair consideration by the Senate," he said. "And her nomination should be considered in the new Congress through regular order."

Lynch was a federal prosecutor in New York when she encountered an astonishing case of police brutality: the broomstick sodomy of a Haitian immigrant in a precinct bathroom.

The 1997 assault on Abner Louima set off street protests, frayed race relations and led to one of the most important federal civil rights cases of the past two decades. Lynch was a key part of the team that prosecuted officers accused in the beating or of covering it up.

Obama's nomination of Lynch comes as the Justice Department she would take over continues to investigate the police shooting of an unarmed black 18-year-old in Ferguson, Mo., and seems partly intended to convey the message that police misconduct and civil rights will remain principal focus even after the departure of Holder.

Lynch has overseen corruption, terrorism and gang cases. But it's her involvement some 15 years ago in the Louima prosecution that gave her experience that is in step with a core priority of the department.

Selecting someone with civil rights experience could reaffirm the government's commitment to that cause.

That figures to be an especially important signal to send as community members in Ferguson brace for the real prospect that state and federal investigations into the shooting death of Michael Brown will close without criminal charges.

Holder has said he expects his federal investigation to conclude before he resigns, but Lynch would inherit a civil rights probe into the practices of the entire Ferguson Police Department.

Lynch also was the top federal prosecutor for Brooklyn, Queens, Long Island and Staten Island during the 2012 conviction of Najibullah Zazi for a foiled plot to bomb the city's subway system.

Lynch was as U.S. attorney from 1999 to 2001, as the Louima case slogged through the courts on appeals and new trials. She left for private practice before being nominated again in 2010 to run the office.

Lynch, who grew up in Greensboro, North Carolina, "rode on her father's shoulders to his church, where students would meet to organize anti-segregation boycotts," Obama said. "She was inspired by stories about her grandfather, a sharecropper in the 1930s, who helped folks in his community who got in trouble with the law and had no recourse under the Jim Crow system."