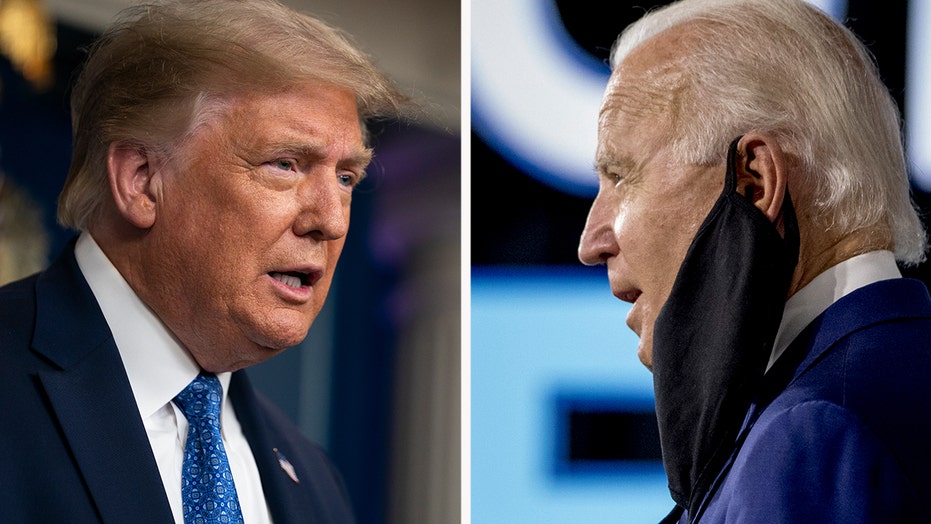 The Trump campaign is firing back at claims made by Joe Biden in a virtual campaign event; Peter Doocy reports.

Federal support for state and local law enforcement under the Community Oriented Policing Services (COPS) program fell by hundreds of millions of dollars during the Obama administration despite a pledge to maintain full funding, records show – a move leading Republicans to caution this week that Joe Biden may make a similar cutback.

The White House and the Cato Institute have countered that overall federal grants for local and state law enforcement agencies increased under the Trump administration, after falling during the Obama administration.

As nationwide protests over the in-custody death of George Floyd have transformed into a broader movement, including efforts to destroy a federal courthouse in Portland, the back-and-forth over police funding has become one of the most pressing issues of the presidential campaign.

“Joe Biden cut police funding as vice president and he told a liberal activist he will do it again," Steve Kardian, a Trump campaign advisory board member and 30-year law enforcement veteran, told Fox News. "The left-wing radicals running his party want to abolish and defund the police, and Biden is too weak to stand up to them. President Trump will never abandon our men and women in blue or bow to the violent mob. He will always take action to protect all families and keep our communities safe.”

Added Trump campaign communications director Tim Murtaugh: “Joe Biden has a record of cutting police funding as vice president and now he says he wants to ‘redirect’ police funding to other government programs. Those facts are not in dispute. What’s also indisputable is that law enforcement funding has increased under President Trump and he will always stand with our men and women in blue.”

The Biden campaign didn't reply to Fox News' request for an on-the-record comment.

During the 2008 presidential campaign, then-candidate Barack Obama promised that he would "fully fund" the COPS program, which lawmakers said amounted to a $1 billion funding minimum. That didn't happen.

"In each of Obama's proposed budgets for 2010-13, he requested below $1 billion," PolitiFact has noted. "Obama said he would fully fund the federal community policing program, using an implied definition of $1 billion per year. Since the program received well below $1 billion for each of the last three years, we rate this a Promise Broken."

CHRIS WALLACE ON TRUMP INTERVIEW: HE TOOK ALL THE QUESTIONS, BIDEN HASN'T FACED THE SAME SCRUTINY

According to the Congressional Research Service, in fiscal year 2010, COPS funding went from $1.55 billion to $792 million. The program received a $1 billion boost from stimulus funding in 2009. Then, in fiscal year 2011, funding dropped from $792 million to $495 million. A massive cut came in 2017, the Obama administration's final budget, when funding dropped to $222 million.

Police groups protested the cuts at the time. "Community-oriented policing is a highly effective crime-fighting strategy and it has been part of our nation's anti-crime strategy for nearly 20 years," Chuck Canterbury, the national president of the Fraternal Order of Police, said in 2012. "Law enforcement officers are used to doing more with less, but even we cannot do more with nothing. The reductions in the draft appropriations bill are simply irresponsible."

Federal officers guard the Mark O. Hatfield U.S. Courthouse as a fire lit by protesters burns on the other side of a perimeter fence Saturday, July 25, 2020, in Portland, Ore. On the streets of Portland, a strange armed conflict unfolds night after night. It is raw, frightening and painful on both sides of an iron fence separating the protesters on the outside and federal agents guarding a courthouse inside. This weekend, journalists for The Associated Press spent the weekend both outside, with the protesters, and inside the courthouse, with the federal agents, documenting the fight that has become an unlikely centerpiece of the protest movement gripping America. (AP Photo/Noah Berger)

The Obama administration apparently didn't supplement the lost COPS funding in other ways. A report from the National Criminal Justice Association and the Vera Institute of Justice found that from 2010 and 2013, nearly 80 percent of surveyed state and local law enforcement agencies reported a drop in federal funding.

Despite a growing movement to defund the police, a majority of voters reject reducing police funding and moving that money to social services, according to an ABC/Washington Post poll released earlier this month.

The poll found that a majority of Americans (63 percent) support the Black Lives Matter movement, and 69 percent say Black people and other minorities are not treated equally in the criminal justice system – that number is up 18 points from 2014.

When asked during a Now This interview with activist Ady Barkan if he agrees “that we can redirect some of the [police] funding,” Biden responded, “Yes, absolutely.”

In a heated moment with “Fox News Sunday” host Chris Wallace during their interview that aired Sunday, Trump asserted Biden wants to defund police – only for Wallace to swiftly interject.

Trump defended his assertions, citing the charter for a partnership between Biden and Sen. Bernie Sanders, I-Vt., known as the Unity Task Force. The task force’s recommendations for the Democratic platform do not specifically mention defunding police, but they do imply a restructuring of law enforcement.

“Democrats will reinvigorate community policing approaches, so officers on the beat better serve the neighborhoods they work in, and make smart investments to incentivize departments to build effective partnerships with social workers and mental health and substance use counselors to help respond to frontline public health challenges,” the document says.

The idea of taking some police funding – but not all of it – and redistributing it elsewhere is consistent with the concept put forth by Black Lives Matter managing director Kailee Scales.

In a video posted to the organization’s website, Scales explained that defunding police could mean taking just a portion of the money currently going to police and reallocating it to other programs.

“What if we used our tax money to put toward other services like education, like health care, like housing, like employment opportunities?” Scales asked in the video, adding, “In some cities, just by defunding the police by 5 percent would double the budget for public health.”