New York City’s sanctuary city policy is again under fire after an illegal immigrant, who was released from NYPD custody in November despite a plea from federal immigration officials to hold him, is alleged to have gone on to sexually assault and murder a 92-year-old woman.

“There has been a complete breakdown of law & order in New York City,” Acting Department of Homeland Security Chad Wolf tweeted Wednesday. “NYC proudly passed sanctuary city laws & bragged about it for months. But now they, & more importantly, the citizens of NYC are facing the deadly consequences of the sanctuary policies.”

Reeaz Khan, an illegal Guyanese immigrant, is accused of attacking Maria Fuertes as she walked home on Jan. 6. Fuertes lay half-dressed in 32-degree weather, conscious but “incoherent” at 2 a.m. She was taken to a hospital, where she died from injuries that included a broken spine, according to The New York Post.

Khan was arrested and reportedly told detectives that he found Fuertes lying on the ground and was trying to help when he “fell down, his belt broke, his pants fell down and his penis fell near her vagina.”

But the case has renewed scrutiny on New York City’s policy of being a “sanctuary” jurisdiction -- meaning it does not comply with detainers issued by federal immigration authorities unless they are convicted for one of a number of serious or violent crimes. Those detainers are requests that Immigration and Customs Enforcement (ICE) be alerted when an illegal immigrant is about to be released from custody so that they can be transferred to ICE custody and go through deportation proceedings.

ICE announced this week that they had issued a federal immigration detainer on Khan in November when he was previously arrested on assault and weapons charges. The NYPD ignored the detainer and Khan was released.

Thomas Decker, field office director for ICE’s Enforcement and Removal Operations (ERO), said in a statement that the sanctuary policy was "dangerously flawed” and accused New York politicians of caring more about criminal illegal immigrants than their own people.

“New York City’s sanctuary policies continue to threaten the safety of all residents of the five boroughs, as they repeatedly protect criminal aliens who show little regard for the laws of this nation,” he said. “In New York City alone, hundreds of arrestees are released each month with pending charges and/or convictions to return back into the communities where they committed their crimes, instead of being transferred into the custody of ICE.”

“Clearly the politicians care more about criminal illegal aliens than the citizens they are elected to serve and protect,” he said.

The NYPD initially told the Post that it “did not receive an ICE detainer” regarding Khan -- leading ICE to take the extraordinary step of posting the fax confirmation sheet proving that the request was made. 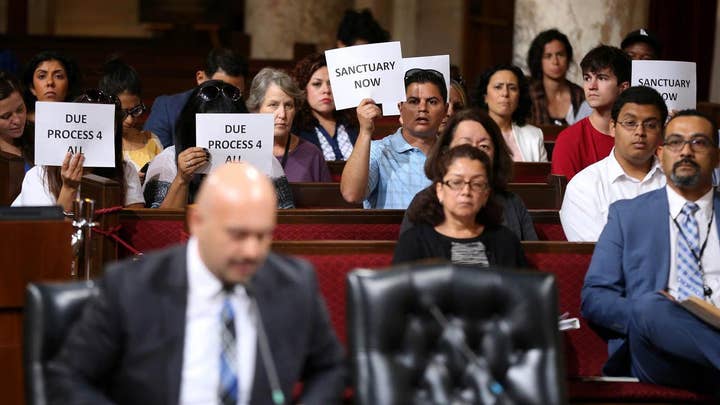 “It is the height of hypocrisy for NYC to blame ICE for this tragic crime. The mayor & police chief have continually celebrated that they don’t honor ICE detainers, & to deflect the criticism for this completely preventable murder is incredibly disingenuous & shameful,” Acting ICE Director Matthew Albence said.

“ICE could’ve wallpapered the precinct with detainers & #NYPD would still not have honored them,” he said.

Mayor Bill de Blasio then defended the policy, going so far as to double down and claim it makes New Yorkers safer. He also noted that there are 177 crimes that do trigger cooperation with law enforcement.

“The Trump administration’s scare tactics destroy trust in law enforcement,” he tweeted. “The day our police ask for immigration status is the day people stop reporting crimes & sharing information. It’s the day we stop being the safest big city in America. We won’t let that happen.”

DHS spokeswoman Heather Swift shot back, accusing de Blasio of “hypocrisy” and of hiding behind police because “he cannot defend his anti-law enforcement policies.”

“Tell me Mr. Mayor: What are you going to tell [Fuertes'] family? ‘I could have prevented your loved one’s rape & murder but I decided to provide sanctuary to criminal aliens instead.’"

"The role of law enforcement is to keep our families safe -- plain and simple," LiPetri said. When Bill de Blasio and other radical left-wing politicians advance policies that protect those here illegally, they tie the hands of our police and jeopardize our communities. This is a matter of public safety. For sanctuary sympathizers to interfere in this process with partisan politics, they are gambling with American lives. It's shameful."

“It’s time to publicly call out those who have put politics over public safety, those who make our communities less secure, who create safe havens in which criminal aliens and gangs are allowed to flourish and can victimize innocent people with impunity,” Albence said at a White House briefing.