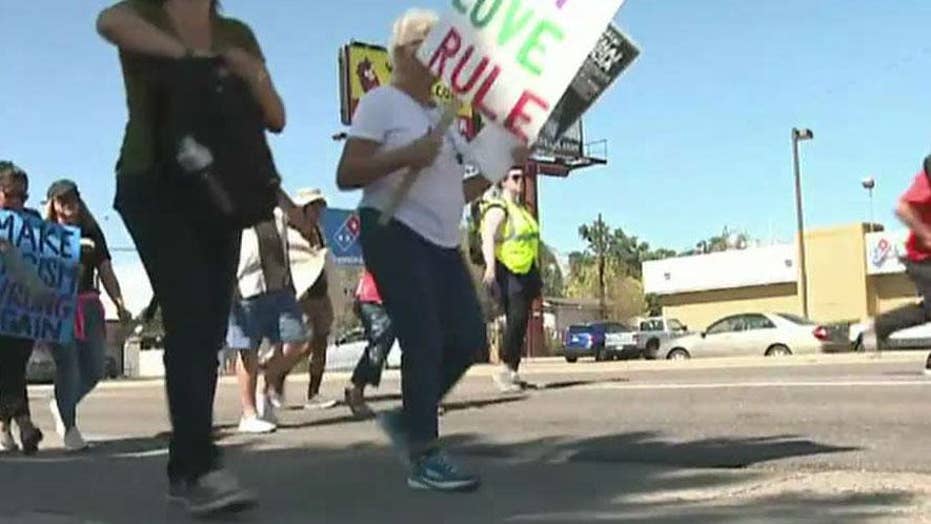 Pro-ICE and anti-ICE protestors face off in Denver, Colorado

Acting Immigration and Customs Enforcement (ICE) Director Matthew Albence on Thursday revealed a recent ICE operation nabbed dozens of illegal immigrants with a record of child sex offenses, as he railed against the dangers of "sanctuary cities" he said put public safety at risk.

“It’s time to publicly call out those who have put politics over public safety, those who make our communities less secure, who create safe havens in which criminal aliens and gangs are allowed to flourish and can victimize innocent people with impunity,” he said in a White House briefing, surrounded by sheriffs and other law enforcement officials.

The briefing was part of a coordinated push by the Trump administration to again highlight the dangers of “sanctuary” jurisdictions that refuse to comply with detainers from immigration enforcement authorities. Senior ICE officials will be holding briefings across the country to warn of the dangers of sanctuary policies.

Those detainers request that local law enforcement notify immigration authorities when an illegal immigrant who has been arrested is due to be released from jail, so that they can be picked up by ICE and placed in deportation proceedings. Albence said that last year they deported more than 145,000 criminal illegal immigrants, including 10,000 gang members, and that about 70 percent of arrests ICE conducts occur via a detainer from a local or state jail or prison.

But with anti-ICE and open-border sentiments taking a growing hold among Democratic lawmakers and left-wing activists, a number of cities and states -- including New Jersey, California, Chicago and New York City -- have implemented sanctuary policies and refused to cooperate with law enforcement.

Albence pointed to a national ICE operation this week in which officers made 1,300 arrests. He said that of those, officers arrested nearly 200 who could have been arrested in jail if detainers had been honored.

Albence gave the example of a man in Mecklenburg County, N.C., who was arrested for driving while intoxicated earlier this year. ICE filed a detainer but he was released. In June he was then arrested for two counts of assault on a female, assault by strangulation, assault with a deadly weapon and a DWI. He was again released, despite an ICE detainer.

"Hopefully we will find him before he hurts or kills another innocent victim,” he said.

He added that ICE could prevent numerous crimes if local law enforcement complied with detainers, and asked what those jurisdictions to say to the family of a victim of a crime committed by an illegal immigrant. 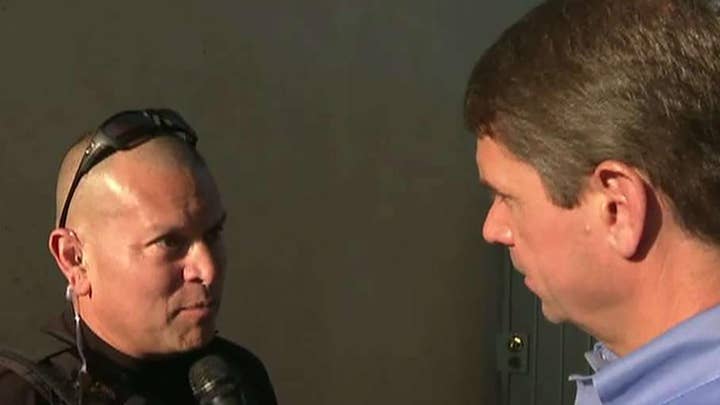 “For those who support victims’ rights, and who among us doesn’t, how do we tell a grieving victim that the person who hurt you or your loved one that the crime was preventable if local law enforcement had merely honored a detainer or given us a phone call?” he said. “Who are these sanctuary cities really protecting?”

Law enforcement who joined Albence at the podium echoed those sentiments.

“We know that too often in the wake of these criminal aliens are left nothing but a trail of victims,” said Sheriff Jim Skinner of Collin County, Texas.

Albence’s questioning of whether liberal immigration policies are as compassionate as activists claim comes on the heels of Trump making a similar argument at the United Nations, where he slammed the “cruel” policies of open-border activists.

"Today, I have a message for those open border activists who cloak themselves in the rhetoric of social justice: Your policies are not just, your policies are cruel and evil," he said Tuesday, accusing them of promoting human smuggling and the "erasure of national borders."