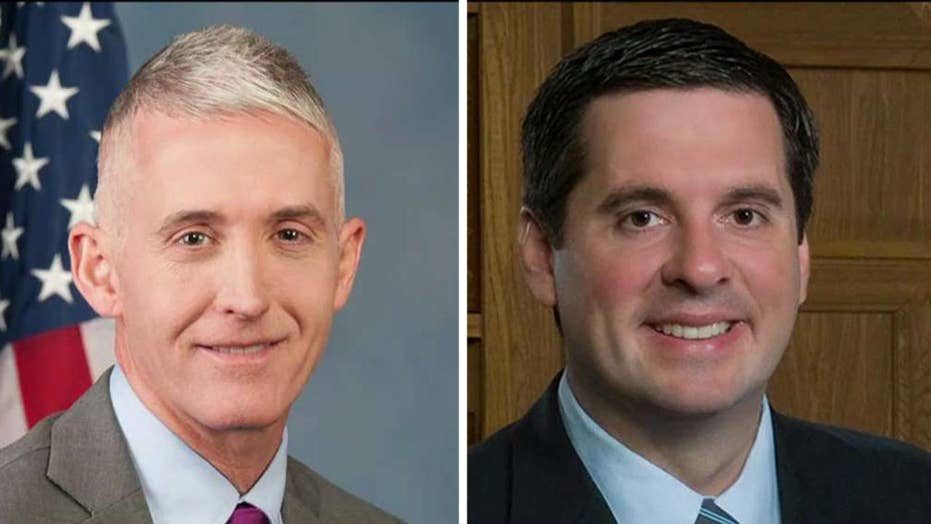 House Intelligence Committee Chairman Devin Nunes and House Oversight Chairman Trey Gowdy have been invited to DOJ for a classified briefing about Nunes' latest request for classified information related to the Russia Investigation.

Fox News has learned this is a direct result of a meeting at the White House on Tuesday between Deputy Attorney General Rod Rosenstein, his deputy Ed O'Callahan and White House Chief of Staff John Kelly.

Rosenstein had been on official travel in New York but raced back to Washington for the meeting.

A source familiar with the situation tells Fox News that after the meeting the three held a speakerphone call with Nunes and Gowdy and told the lawmakers the DOJ would work with them in an effort to get them the information they have been seeking.

The Californian Republican’s committee has been looking into allegations that the Justice Department and the FBI abused the Foreign Intelligence Surveillance Act in their scrutiny of the Trump campaign. But is not clear exactly what information Nunes is seeking.

Things have been tense in recent weeks between Nunes and the Justice Department, with Nunes at one point threatening to hold Attorney General Jeff Sessions in contempt.

"On Thursday we discovered that they are not going to comply with our subpoena," Nunes said on "Fox and Friends" last weekend, adding, "The only thing left to do is we have to move quickly to hold the attorney general of the United States in contempt and that is what I will press for this week."

The Justice Department, though, has previously told Nunes in a letter that it "is not in a position to provide information responsive to your request regarding a specific individual."

"The Department and its intelligence community partners would welcome the opportunity to discuss whether there are other ways to accommodate the House Permanent Select Committee on Intelligence's oversight inquiry," Assistant Attorney General Stephen E. Boyd wrote in a recent letter to Nunes.