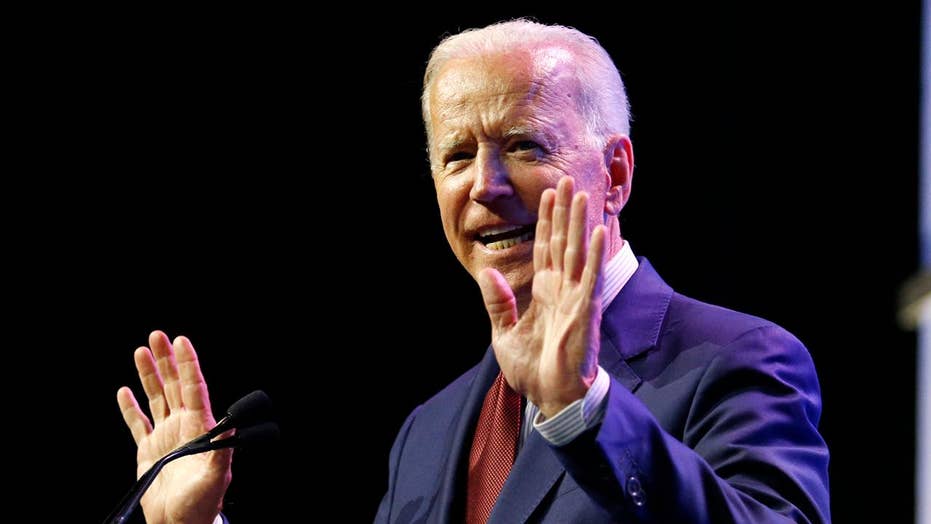 Was it a mistake for Joe Biden to skip the California Democratic convention?

2020 hopefuls in attendance at the California Democratic Party convention take swipes at the absent party frontrunner.

He wasn’t attacked by name, but it was clear that former Vice President Joe Biden was the piñata this past weekend at the first major cattle call for the historically large field of Democrats running for the White House.

The verbal fireworks in San Francisco were the latest sign that the left wing of the Democratic Party is in no mood to see Biden – derided by many of them as a centrist establishment Democrat – become the party's standard-bearer in 2020.

“We will not defeat Donald Trump unless we bring excitement and energy into the campaign,” declared Sen. Bernie Sanders, taking some of his strongest shots to date at Biden, without naming him.

“We cannot go back to the old ways,” argued Sanders, the independent senator from Vermont who’s making a second straight run for the Democratic nomination.

Many Biden supporters argue that a time-tested and more centrist Democrat, like the former vice president, stands the best chance of defeating GOP President Trump in next year’s general election.

“Some say if we all just calm down, the Republicans will come to their senses," she told the delegates attending the convention, in a clear reference to Biden's recent comments that the GOP may have an "epiphany" after Trump is gone and be more willing to work with Democrats.

"But our country is in a crisis. The time for small ideas is over," Warren said.

South Bend, Indiana Mayor Pete Buttigieg, who increasingly contrasts himself with the 76-year-old Biden, did it again this weekend in California. The 37-year-old Buttigieg argued that “the riskiest thing we can do is play it safe.”

Buttigieg, a one-time long-shot who’s surged to legitimate contender status in recent months, highlighted that "there's no going back to normal."

And Rep. Eric Swalwell of California – who faces a steep uphill climb to win the nomination – took aim at Biden over the now-controversial 1994 crime bill, which the then-senator from Delaware helped craft.

“We don't need a crime bill — we need a hope bill," Swalwell declared.

Biden’s been repeatedly criticized by some of his Democratic rivals for his hand in the crime bill, which critics argue spurred mass incarceration.

It wasn’t just Biden who took plenty of incoming fire.

Former Colorado Gov. John Hickenlooper – one of the more moderate candidates in the field of two-dozen contenders – elicited loud boos from the crowd in a viral video moment when he declared "socialism is not the answer" to enacting progressive policies and beating Trump.

Hickenlooper quickly highlighted the negative reaction on his Twitter account: "I know this message won't be popular with everyone in our party. But the stakes are too high. We cannot hand this election to Donald Trump."

Former Rep. John Delaney of Maryland also sparked a chorus of boos from the audience when the centrist Democratic presidential candidate declared that “Medicare for All may sound good, but it’s actually not good policy, nor is it good politics.”

Freshman Rep. Alexandria Ocasio-Cortez of New York, a rising star among the progressive wing of the party, took aim at Delaney, saying it was time for him to “sashay away.”

“Since there’s so many people running for President (& not enough for Senate), instead of obsessing over who‘s a 'frontrunner,' maybe we can start w some general eliminations,” Ocasio-Cortez wrote. “This awful, untrue line got boo’ed for a full minute. John Delaney, thank you but please sashay away.”

The next day Delaney challenged the congresswoman to debate him on the issue.

“Hey @AOC, we have the same goal, universal healthcare for everyone, we just have different ways of getting there. Healthcare is the #1 issue for voters, so let’s debate the way forward. Any show of your choosing. Healthcare is too important for tweets, we need real discussion,” he wrote on Twitter.

And on Monday he pleaded with progressives that “if you are booing Democrats, do you really expect the country to trust what you have to say if you can't listen respectfully to people in your own party? Let’s raise the discourse and not fall down to the level of the president.”

For Republicans, the tensions on display in San Francisco are a gift, as they continue to portray the Democrats as an increasingly leftward-leaning political party.

“This weekend's convention was a preview of the far-left, socialist policies that will be front and center on the debate stage. The Democratic Party's love for socialism was on full display as candidates started bruising each other ahead of the general election,” Gierut argued. “By the time we get to the national convention, socialism will be the official party platform that is juxtaposed with President Trump's record in office."

Some Democrats worry that the deep divisions from 2016, when many Sanders supporters didn’t back Democratic nominee Hillary Clinton in the general election, could play out again in 2020 if Biden’s the nominee.

But Terry Shumaker, a New Hampshire-based attorney and former U.S. ambassador who was a top adviser to Bill and Hillary Clinton and who is a top Granite State supporter of Biden, argued that the "vice president's progressive record speaks for itself."

He added that the strong desire by Democrats and some independents to oust Trump from the White House in 2020 makes the circumstances "very different."

Democratic strategist Jesse Ferguson, who served as a senior spokesman on the 2016 Clinton campaign, emphasized that “campaigns aren’t about refighting the last war, they’re about winning the next one…. Candidates are running their own race – not repeating the successes nor the failures of 2016.”