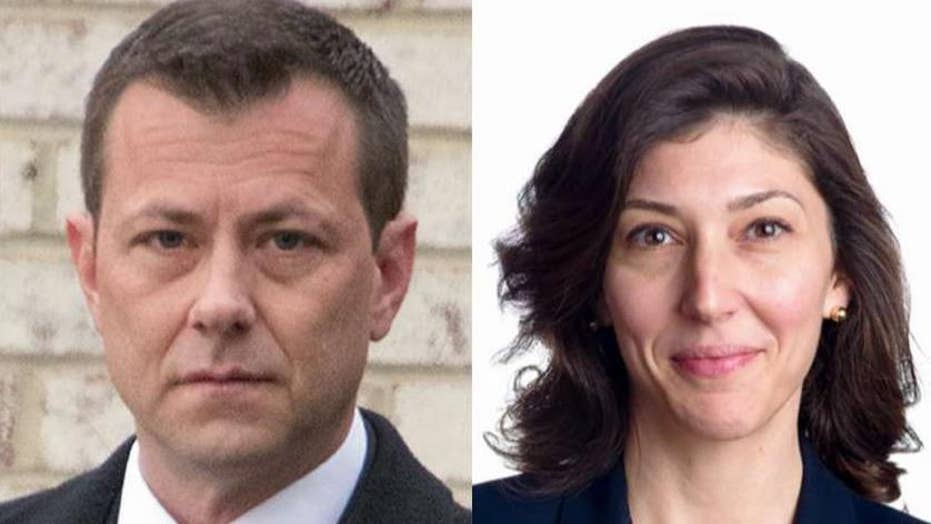 The trove of documents turned over by the FBI, in response to a lawsuit by the transparency group Judicial Watch, also included discussions by former FBI lawyer Lisa Page concerning a potential quid pro quo between the State Department and the FBI -- in which the FBI would agree to effectively hide the fact that a Clinton email was classified in exchange for more legal attache positions that would benefit the FBI abroad, and allow them to send more agents to countries where the FBI's access is ordinarily restricted.

The quid pro quo would have involved the FBI providing some other public reason for withholding the Clinton email from disclosure amid a Freedom of Information Act request, besides its classification level. There are no indications the proposed arrangement ever took place.

And, in the face of mounting criticism aimed at the FBI, the documents revealed that Comey quoted the 19th century poet Ralph Waldo Emerson by assuring his subordinates, "To be great is to be misunderstood."

The FBI did not respond to Fox News' request for comment on the released emails.

New text messages between Strzok and Page were 'leaking like mad' in the lead up to the Trump-Russia probe.

On Oct. 28, 2016, Comey upended the presidential campaign by informing Congress that the FBI would quickly review the Weiner laptop. The Justice Department's internal watchdog later faulted the FBI for failing to review the Weiner laptop through much of the fall of 2016, and suggested it was possible that now-fired FBI Agent Peter Strzok may have slow-walked the laptop analysis until other federal prosecutors pressured the FBI to review its contents.

On the afternoon of Oct. 28, Clinton lawyer David Kendall demanded answers from the FBI -- and the agency jumped into action, the emails showed.

STRZOK DEMANDED DECLASSIFICATION, OTHER POWERS BEFORE BECOMING NO. 2 ON MUELLER TEAM

Many of the emails found on the computer were between Clinton and her senior adviser Huma Abedin, Weiner's now-estranged wife. Despite claims by top FBI officials, including Strzok, several of those emails were determined to contain classified information.

"I received the email below from David Kendall and I called him back," then-FBI General Counsel James Baker wrote to the agency's top brass, including Comey, Page and Strzok, in an email. "Before doing so I alerted DOJ via email that I would do that."

Page and Strzok eventually were revealed to be having an extramarital affair, and Strzok was terminated after a slew of text messages surfaced in which he and Page derided Trump and his supporters using their government-issued phones. Republicans, citing some of those text messages, have accused Strzok and Page of orchestrating a coordinated leak strategy aimed at harming the president.

GOHMERT UNLOADS ON 'SMIRKING' STRZOK: 'HOW MANY TIMES DID YOU LOOK SO INNOCENT INTO YOUR WIFE'S EYES AND LIE?'

Although a portion of Kendall's email was redacted, Baker continued: "He said that our letter was 'tantalizingly ambiguous' and made statements that were 'inchoate and highly ominous' such that what we had done was worse than transparency because it allows people to make whatever they want out of the letter to the prejudice of Secretary Clinton. ... I told him that I could not respond to his requests at this time but that I would discuss it with others and get back to him.

"To be great is to be misunderstood."

"I suggest that we have some kind of follow up meeting or phone call with this group either this evening or over the weekend to address this and probably other issues/questions that come up in the next 24 hours," Baker concluded. "Sound reasonable?"

In a partially redacted response, Strzok agreed to spearhead a conference call among the FBI's top officials the next day.

Comey sent a letter to Congress in November 2016 stating agents had concluded their review of "all of the communications" to or from Clinton while she was secretary of state that appeared on the laptop, and that the review did not change his assessment that Clinton should not be prosecuted. (Justin Tang/The Canadian Press via AP, File)

On Nov. 6 -- just two days before Election Day -- Comey sent another letter to Congress stating that agents had concluded their review of "all of the communications" to or from Clinton while she was secretary of state that appeared on the laptop, and that the review did not change his assessment that Clinton should not be prosecuted.

In an email also sent Nov. 6 and unearthed by Judicial Watch, Strzok wrote to the FBI's leadership: "[Redacted], Jon and I completed our review of all of the potential HRC work emails on the [Anthony Weiner] laptop. We found no previously unknown, potentially classified emails on the media.”

Strzok added that a team was coming in to "triple-check" his methodology and conclusions.

However, at least 18 classified emails sent from Abedin's account were found by the FBI on the Weiner laptop. And, despite Strzok's apparent claim, FBI officials later conceded they had not manually screened all of the nearly 700,000 emails on the laptop, but instead used computer technology to prioritize which emails to screen as Election Day rapidly approached.

“It is big news that, just days before the presidential election, Hillary Clinton’s personal lawyer pressured the top lawyer for the FBI on the infamous Weiner laptop emails,” Judicial Watch President Tom Fitton said in a statement. “These documents further underscore that the fix was in for Hillary Clinton. When will the Justice Department and FBI finally do an honest investigation of the Clinton email scandal?”

An email from Lisa Page discussed an apparent attempt by the State Department to pressure the FBI to downgrade the classification level of a Clinton email. (AP Photo/Jacquelyn Martin, File)

Separately, another email from Page, apparently sent in response to a Judicial Watch lawsuit, discussed an apparent attempt by the State Department to pressure the FBI to downgrade the classification level of a Clinton email.

"Jason Herring will be providing you with three 302s [witness reports] of current and former FBI employees who were interviewed during the course of the Clinton investigation," Page wrote. "These 302s are scheduled to be released to Congress in an unredacted form at the end of the week, and produced (with redactions) pursuant to FOIA at the beginning of next week.

Page continued: "As you will see, they describe a discussion about potential quid pro quo arrangement between then-DAD in IOD [deputy assistant director in International Operations Division] and an Undersecretary at the State Department whereby IOD would get more LEGAT [legal attaché] positions if the FBI could change the basis of the FOIA withhold re a Clinton email from classified to something else."

Fox News has previously reported, citing FBI documents, that a senior State Department official proposed a quid pro quo to convince the FBI to strip the classification on an email from Clinton’s server – and repeatedly tried to “influence” the bureau’s decision when his offer was denied, even taking his plea up the chain of command.

In a statement at the time, the FBI acknowleged that an agency official had been in touch with the State Department about overseas positions, but denied that the conversation was tied to the classification of a Clinton email.

Hillary Clinton, during her last visit to New Hampshire in December 2017 as part of her book tour. (Paul Steinhauser/Fox News)

"Prior to the initiation of the FBI’s investigation of former Secretary Clinton’s personal email server, the FBI was asked to review and make classification determinations on FBI emails and information which were being produced by the State Department pursuant to FOIA [a Freedom of Information Act request].  The FBI determined that one such email was classified at the Secret level.  A senior State Department official requested the FBI re-review that email to determine whether it was in fact classified or whether it might be protected from release under a different FOIA exemption," the FBI said.

Through it all, the trove of documents suggested that top to bottom, FBI brass were convinced they were acting appropriately.

In response to a press release from Iowa Republican Sen. Chuck Grassley that criticized the FBI for failing to provide unclassified information on its Clinton probe in a timely and thorough manner to Congress, Comey quoted Emerson's 1841 essay "Self Reliance."

"Outstanding. ... I should have added that I'm proud of the way we have handled this release [of unclassified information]," Comey wrote to his subordinates, including Strzok, on Sept. 2, 2016. "Thanks for the work on it. Just another reminder that Emerson was right when he said, 'To be great is to be misunderstood.' Have a great and quiet weekend."

Page forwarded the email along to her colleagues, including Strzok, and added a smiley face.

Trump fired Comey in 2017, leading to Special Counsel Robert Mueller's investigation after Comey leaked a series of memos he recorded while speaking with Trump privately.

Comey acknowledged in closed-door testimony in December that as of July 2016, investigators "didn't know whether we had anything" implicating Trump in improper Russia collusion, and that "in fact, when I was fired as director [in May 2017], I still didn't know whether there was anything to it."