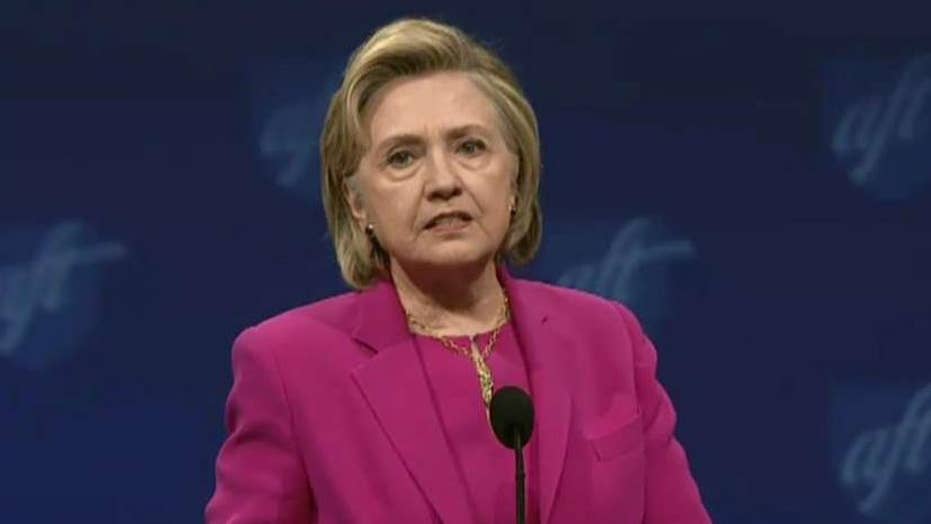 Is Clinton's stance on immigration in Europe hypocritical?

In 1988 Bill Clinton had already been governor of Arkansas for five years and Hillary Clinton was the state’s first lady. They went on to the White House when Bill was elected president, and Hillary later became a U.S. senator from New York, secretary of state for President Obama, and a twice-failed presidential candidate.

Bill and Hillary Clinton are the Energizer couple of politics. Might they secretly be battery-powered? Should a special counsel be appointed to investigate?

At a time when young Democrats are trying to take over leadership of the party, people the age of their parents and grandparents refuse to give up or share power. We have seen this play out with 78-year-old House Democratic Leader Nancy Pelosi’s all-out effort to become Speaker of the House yet again in January.

In early October the Clintons announced that they would jointly be hitting the road on a speaking tour that would take them to 13 cities. They even went so far as to book safe Democratic harbors in hopes of assuring packed venues.

Cities like Philadelphia, Boston, Detroit, and Seattle were on the list. Ticket prices for “An Evening with the Clintons” initially were set from $59.50 to $375. At some venues, tickets were priced as high as $745.

Do they give out free cell phones and hammers as door prizes? Reset buttons? Whitewater rafting trips?

The Clintons chose Canada to open their tour and their first gig was held this week in a hockey arena in Toronto that seats about 19,000. The arena reported that the couple sold 3,300 tickets and it looked like it from photos released. A headline in American Thinker summed it up: “Clintons’ speaking tour event in Toronto had 83% of the seats empty.”

The secondary ticket brokers like StubHub were hawking last-minute tickets for $6.55 in Canadian money, which translates to about $5 in U.S. money.

Like unpopular books on sale on the remainder table, the Clintons have had their price marked down – way down.

As a headline in The Star newspaper in Toronto said: “Hillary and Bill Clinton just won’t go away.”

The Clintons cannot be shamed. The humiliation of speaking to empty halls and stadiums from sea to shining sea must be tempered by hefty speaking fees, as they struggle to get by. Remember, back in 2014 Hillary told ABC News: “We came out of the White House not only dead broke but in debt.”

Can anyone set up a GoFundMe page for Bill and Hillary? Maybe things are better for the struggling couple now, thanks to the Trump tax cuts.

The talk by the former first couple in Toronto was reported as consisting of rants and raves. It was an evening of Trump-bashing and what might have been.

Just imagine if Election Day in 2016 had seen Donald Trump defeated. Today first gentleman Bill could be tending to the Rose Garden, planning the White House Christmas decorations, redecorating the family quarters, and picking the menus for state dinners. And President Hillary could be breaking glass ceilings and cellphones, and fighting what she once called the “vast right-wing conspiracy.”

The Clintons’ shtick in their appearances is a walk down memory lane, revenge, jokes only the most ardent Clinton lovers would find funny, fantasy and tag-team banter.

Juxtapose the Clintons’ speaking tour for profit and President Trump’s free-admission appearances to standing-room audiences and thousands waiting outside in cities all across America.

BREAKING NEWS: The Clintons ain’t what they used to be. They are desperately trying to stay relevant in a nation and a party that have long since moved on.

I feel sorry for Democrats. They are haunted by the ghosts of Democrats past. The only thing worse than the older Democrats are the younger ones who proudly proclaim themselves to be “democratic socialists.”

I remember a time that if you called a Democrat a “socialist” you were defaming him or her. Today, many younger Democrats are upset if you don’t call them socialists.

Democrats are wrestling with an identity crisis: Who are they? What do they stand for? Who are their leaders?

One thing is for sure – America is Clintoned out. I predict that many Clinton appearances will have to be cancelled because not enough people will want to pay to hear their old stories.

What makes it even worse? It is rumored that Hillary is mulling a run for president again in 2020.