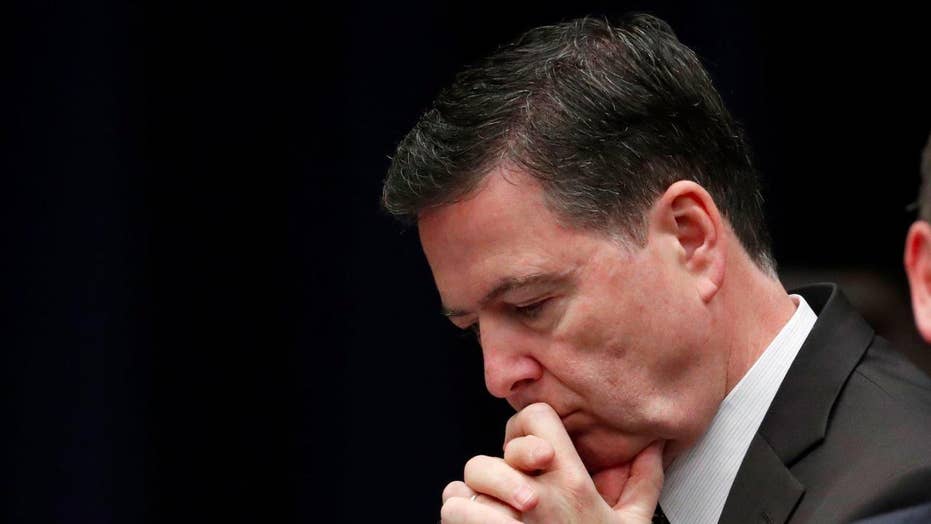 President Trump on Tuesday fired FBI Director James Comey, abruptly ending a rocky year-long stretch for the top law enforcement officer who came under fire for his handling of the Clinton email probe -- and whose agency has been investigating whether Trump's campaign had ties to Russia.

“The FBI is one of our nation’s most cherished and respected institutions, and today will mark a new beginning for our crown jewel of law enforcement,” Trump said.

The president told Comey in a brief letter that he could not “effectively lead” the bureau and called for “new leadership that restores public trust and confidence” in law enforcement.

A search for a new permanent FBI director will begin immediately. In a message to FBI employees, Sessions said Andrew McCabe, the bureau's deputy director, had assumed the position of acting director.

The White House made the stunning announcement shortly after the FBI corrected a sentence in Comey's sworn testimony on Capitol Hill last week. The director had told congressional lawmakers that Huma Abedin, as a top aide to then-Secretary of State Hillary Clinton, had sent "hundreds and thousands" of emails to her husband's laptop, including some with classified information.

On Tuesday, the FBI said in a two-page letter to the Senate Judiciary Committee that only "a small number" of the thousands of emails found on the laptop had been forwarded there while most had simply been backed up from electronic devices.

But that error was apparently unrelated to the Comey firing. DOJ officials instead cited his handling of the Clinton probe.

Comey first ran into problems during the 2016 presidential race when he tried to conclude his investigation into Clinton’s use of a private server system for emails while at the State Department.

He concluded that Clinton, then the Democratic presidential nominee, had not acted criminally with classified emails but said she had been “extremely careless.”

He then announced a revived probe regarding the emails and Abedin’s handling of them in the closing days of the race.

Clinton has said that largely contributed to her loss to Trump, while Comey has defended his actions.

The FBI and other members of the U.S. intelligence community, as well as Congress, are now investigating the extent to which Russia was involved in stealing and making public emails from Clinton’s presidential campaign.

“While I greatly appreciate you informing me, on three separate occasions, that I am not under investigation, I nevertheless concur with the judgement of the Department of Justice that you are not able to effectively lead the bureau,” Trump said in a letter to Comey, obtained by Fox News.

Comey, 56, was nominated by President Barack Obama for the FBI post in 2013 to a 10-year term. Praised for his independence and integrity, Comey has spent three decades in law enforcement and has been no stranger to controversy.

Sessions said Comey was fired because the FBI needs a "fresh start."

In his letter to Trump, Sessions said the next FBI director must be someone who follows "faithfully the rules and principles" of the Justice Department.

He also said Comey's decisions on controversial matters, including the Clinton email matter, "have prompted concern from across the political spectrum" and from career law enforcement experts."

Democrats are further insisting on an independent prosecutor to investigate possible links between the Trump campaign and Russia, following the firing.

"The only way the American people can have faith in this investigation is for it to be led by a fearless special prosecutor," said Senate Democratic leader Chuck Schumer, N.Y.