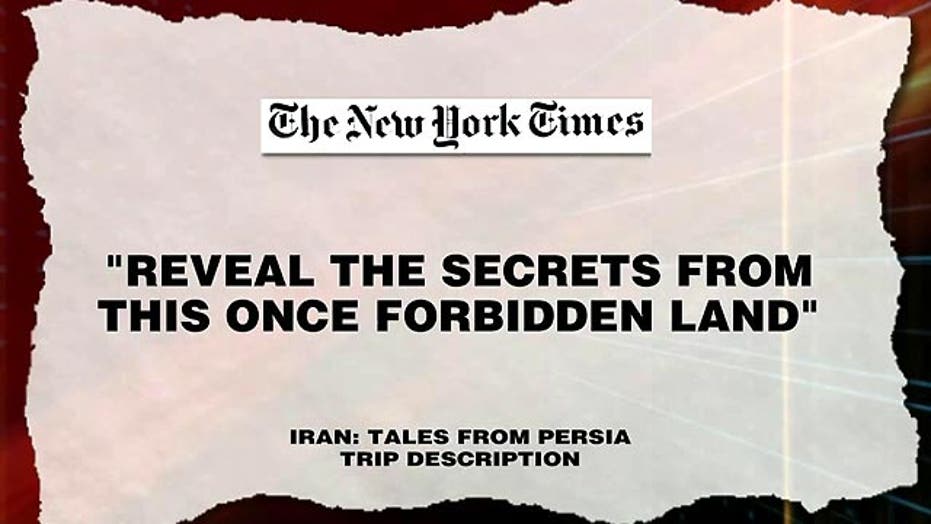 Even in an era when media outlets sell access to their journalists at conferences and on cruises, a new promotion by the New York Times is truly troubling.

The destination is Iran.

Check out this corporate come-on by the Times:

"Journey 2,500 years back in time to discover the ancient secrets of Persia on this 13-day itinerary incorporating some of most well preserved archaeological sites in the world. Welcome to the once-forbidden land of Iran."

Wow. You'd never know that Iran is developing nuclear weapons, supports terrorism, poses a mortal threat to Israel, and has been hostile to the United States since its seizure of American hostages back in 1979.

For a mere $6,995 -- if you act now -- you can accompany Times correspondent Elaine Sciolino as you "journey across country through beautiful landscapes, arid mountains and rural villages to experience vibrant bazaars, get lost in ancient cities and learn about the traditions and cultures of Iran." Oh, and you'll stay in "luxurious hotels," of course.

The Times is promoting the excursion with lush photos and prose to match, a jarring contrast to the way Iran is viewed in the world community.

The Smarter Times website, which publicized the paper's rather unusual sales pitch, says:

"One can understand why the Times is seeking new revenue opportunities as a tour operator, since its revenues in traditional areas such as newspaper subscriptions and advertising are not growing fast enough to satisfy investors. But there is potential for this sort of thing to adversely affect the Times' journalism. How fair will Times journalism be toward those calling for tougher Iran sanctions if the sanctions would force the newspaper to cancel its lucrative luxury tours of Iran?"

The Weekly Standard notes this advisory from the State Department, which somehow went unmentioned in the Gray Lady's promotion:

"Some elements in Iran remain hostile to the United States. As a result, U.S. citizens may be subject to harassment or arrest while traveling or residing in Iran. ... The U.S. government does not have diplomatic or consular relations with the Islamic Republic of Iran and therefore cannot provide protection or routine consular services to U.S. citizens in Iran."

Makes it sound like less of a cultural jewel, doesn't it?

And yet the Times promotion sounds like it could have been written by the Iranian propaganda ministry:

"Tehran is an interesting fusion of old meeting new; conservative elders uphold the traditions of the illustrious Persian past while the young and fashionable adopt a new trendy joie de vivre."

Wait, here's where it really gets embarrassing: Certain folks need not apply.

The Algemeiner, a Jewish newspaper in the U.S., checked out the offer:

"When this reporter called the number provided on their website to ask about details of the trip -- specifically for Israeli passport-holders -- a representative who gave her name as Megan hurriedly turned the call over to Kevin, who stated definitively that '...anyone with a page in their passport with an Israeli visa will be declined.'"

The rep had further advice: "When asked if it would be alright to notify people during the trip of one's Jewish or gay identity, Kevin replied, 'I don't know if you'd want to tell that to everyone you met; if that would be the best idea.'"

This is a no good, terrible, very bad, horrible idea. Sciolino is a well-respected reporter, but no Times journalist should be part of this revolting venture that, by definition, excludes anyone who has been to Israel and is not advisable for people who are Jewish.

However much money the paper stands to make from this outing, it cannot be worth the damage to its reputation.