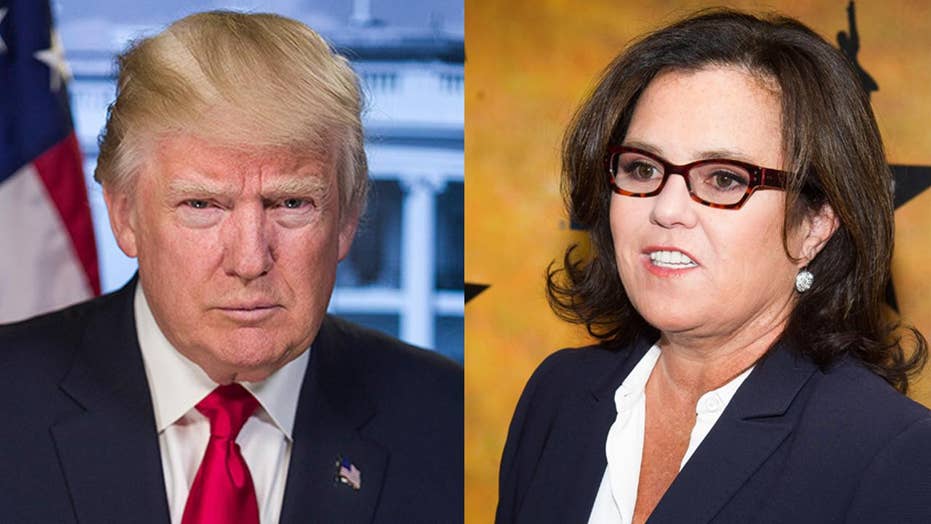 Comedian Rosie O’Donnell put her dislike for President Trump on t-shirts. They apparel is selling on Etsy, with proceeds going to

The National Endowment for the Arts is pouring tens of thousands of dollars into left-wing art projects including plays about transgenderism and even one award to Rosie O’Donnell’s theater group -- after the celebrity repeatedly slammed the president.

The NEA’s first $25 million of grants, first reported by The Washington Free Beacon,  includes big bucks to a range of liberal projects.

The Mixed Blood Theatre Company in Minneapolis gets $40,000 to “support a play series of new trans theater works.” The plays featured on its website include “Mermaid Hour: Remixed” about “exploring the gender continuum through the prism of a pre-pubescent transgender biracial girl."

'Judging by the latest welfare beneficiaries, those elites' tastes remain as degraded as ever, eschewing the good, the beautiful and the true--and anything timeless and transcendent--in favor of soul-killing PC claptrap.'

“Working class parents Pilar and Bird face the cracks in their marriage, their opposing parenting styles, and their fears as they negotiate their daughter’s gender transition. Meanwhile, she navigates puberty, her first crush, and the possibility that YouTube holds all the answers,” the blurb for the play says.

The Gay Men’s Chorus of Los Angeles picked up a $10,000 grant for a national tour of a new work “to deliver a message of acceptance for young people.”

Meanwhile Feminist Press in New York, got a $30,000 grant to support the publication and promotion of fiction books. Feminist Press recently published and promoted a volume on “Radical Reproductive Justice” as well as “Johnny Would You Love Me if My D--k Were Bigger.”

InterAct Inc., meanwhile, received a grant for $10,000 to promote the play “Sensitive Guys,” which the Free Beacon reports involves “female and ‘gender-non-conforming’ actors [playing] men who like to sit around and discuss ‘male privilege.’” It notes that it also benefits from the Minneapolis “trans theater works” grant.

The theater describes the play as a "social satire" on "complicity" and "what it really takes to face the patriarchy."

The Gay Men's Chorus of Los Angeles was given $10,000 by the NEA endowment. (Reuters)

The New York Theatre Workshop was given a $40,000 grant to support the production of “An Ordinary Muslim.” This play focuses on a Muslim couple in London and says “we will all be forced to confront pressing questions about the nature of belonging and our own internal prejudices about that which is ‘other.’”

"These NEA-supported projects are good examples of how the arts build stronger and more vibrant communities, improve well-being, prepare our children to succeed, and increase the quality of our lives," said NEA chairman Jane Chu announcing the grants. "At the National Endowment for the Arts, we believe that all people should have access to the joy, opportunities, and connections the arts bring."

But some conservative critics weren’t impressed by the identity-politics theme of some of the grants.

"NEA grants are a form of welfare for cultural elites, as a Heritage Foundation report famously put it two decades ago," said Sohrab Ahmari, a senior writer at Commentary magazine and the author of the 2016 book "The New Philistines: How Identity Politics Disfigure the Arts."

"Judging by the latest welfare beneficiaries, those elites' tastes remain as degraded as ever, eschewing the good, the beautiful and the true--and anything timeless and transcendent--in favor of soul-killing PC claptrap," he said.