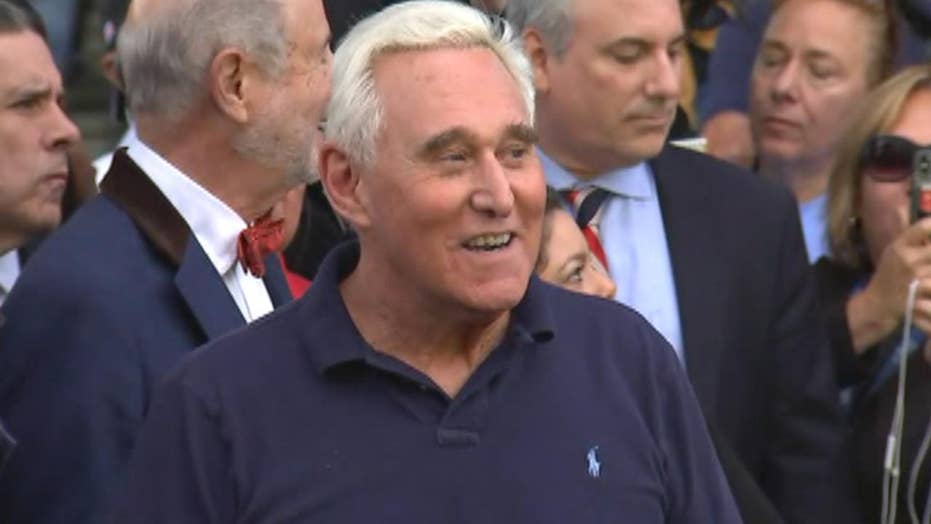 Former Trump adviser Roger Stone vowed during a dramatic press conference outside a federal courthouse in Florida on Friday afternoon to fight the charges of witness tampering, obstruction and false statements brought by Special Counsel Robert Mueller, calling the charges "politically motivated" while insisting he would not turn against President Trump.

"I will plead not guilty to these charges," Stone told reporters, speaking over hecklers. "I will defeat them in court. This is a politically-motivated investigation."

Stone, who once worked for former President Nixon and has a tattoo of the former president on his back, flashed the Nixon V-signs in front of cameras before he spoke.

"There is no circumstance whatsoever under which I will bear false witness against the president, nor will I make up lies to ease the pressure on myself,"  said Stone, who will appear on "Tucker Carlson Tonight" on Fox News Channel Friday at 8 p.m. ET.

Former campaign adviser for President Donald Trump, Roger Stone walks out of the federal courthouse following a hearing, Friday, Jan. 25, 2019, in Fort Lauderdale, Fla. Stone was arrested Friday in the special counsel's Russia investigation and was charged with lying to Congress and obstructing the probe. (AP Photo/Lynne Sladky)

The indictment unsealed Friday does not charge Stone with conspiring with WikiLeaks, the anti-secrecy website that published emails of Democrats during the 2016 campaign, or with the Russian officers Mueller says hacked them. Instead, it accuses him of lying about his interactions related to WikiLeaks' release during probes by Congress and Mueller’s team.

Still, the indictment raises questions about who Stone – who advised Trump for years but left the campaign in 2015 – spoke with about the hacked emails.

For months, Stone has warned that he could be indicted, repeatedly denying the accusation he actually had advance knowledge of WikiLeaks releasing hacked emails of Democrats during the 2016 campaign.

Jay Sekulow, a lawyer for Trump, said Friday, "The indictment today does not allege Russian collusion by Roger Stone or anyone else. Rather, the indictment focuses on alleged false statements Mr. Stone made to Congress.”

A spokesman for Mueller’s office said Stone, 66, was arrested in Fort Lauderdale on Friday morning after being indicted by a federal grand jury a day earlier. Video aired by CNN shows numerous FBI agents with guns banging on Stone’s door and demanding that he come outside.

While the indictment provides some new insight into the Trump campaign, it deals largely with what prosecutors say were Stone's false statements about his conversations with conservative writer and conspiracy theorist, Jerome Corsi, and New York radio host, Randy Credico. Corsi is referred to as Person 1 in the indictment, and Credico as Person 2.

The indictment accuses Stone of carrying out a "prolonged effort" to keep Credico from contradicting his testimony before the House intelligence committee. During that effort, prosecutors note that Stone repeatedly told Credico to "do a 'Frank Pentangeli,'" a reference to a character in "The Godfather: Part II" who lies before a congressional committee.

Stone is also accused of threatening Credico. The indictment cites several messages, some of which have already been public, that Stone sent to Credico last year. On April 9, Stone called Credico a "rat" and a "stoolie" and accused him of backstabbing his friends. Stone also threatened to "take that dog away from you," a reference to Credico's dog, Bianca.

"I am so ready. Let's get it on. Prepare to die (expletive)," Stone also wrote to Credico.