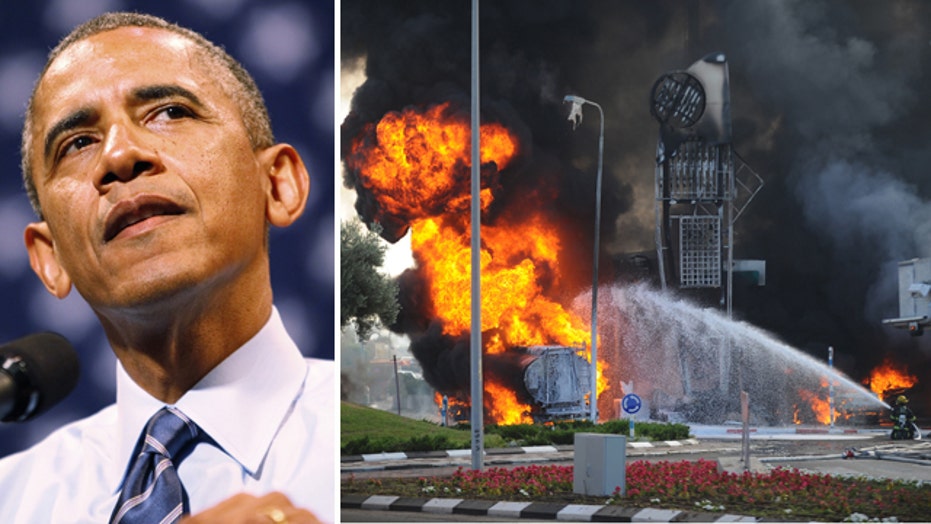 President Obama's call back in 2009 for a "new beginning" between America and the Muslim world -- a relationship defined over the prior decade by 9/11 and the Iraq war -- has descended into a foreign policy sandstorm that has left Washington dizzied by ever-changing powerbrokers, and its closest ally in the region more isolated and threatened.

The deadly conflict between Hamas and Israel, which is intensifying and widening by the day, is just the latest symptom of the Middle East mess.

The "Arab Spring," which the Obama administration roundly cheered, has resulted in only one full-fledged and stable democracy taking hold, in Tunisia. Syria remains gripped by bloody civil war, Egypt and Libya have struggled to establish stable governments, and Islamic extremists wreaking havoc in Iraq have declared their own "caliphate" in territory across a wide swath of land across both Syria and northern Iraq.

And now reported rocket strikes out of Lebanon into Israel are raising concerns of a renewed conflict with Hezbollah.

Former U.S. ambassador to the U.N. John Bolton said the environment now is "much worse" than it was during Israel's war with Hezbollah in 2006, noting Syria is in chaos and nearby Jordan -- a U.S. ally -- is feeling the strain.

"You can really see why what's happening now has the potential for much wider conflict," Bolton said.

He added: "And another significant fact, the United States is almost absent here."

With no end in sight to the rocket fire and airstrikes between Gaza and Israel's interior, President Obama did get personally involved on Thursday, speaking with Israeli Prime Minister Benjamin Netanyahu -- backing Israel's "right to defend itself" and offering to help broker a cease-fire. He urged both sides to de-escalate and protect the lives of civilians.

But his administration is being accused in some corners of losing its way in the Middle East, with the peace process in disarray and the administration allegedly struggling to articulate its own policy toward the current conflict.

Danielle Pletka, vice president of foreign and defense policy studies at the American Enterprise Institute, said the U.S. "appears out to lunch on Middle East challenges."

The administration's message on Israel got murkier earlier this week when White House adviser Philip Gordon delivered an address in Tel Aviv that was highly critical of the key U.S. ally.

"Israel confronts an undeniable reality: It cannot maintain military control of another people indefinitely," he said Tuesday, according to The Times of Israel. He praised Palestinian Authority President Mahmoud Abbas as a reliable partner, but questioned whether Israel was committed to peace.

Pressed on Gordon's comments the next day, State Department spokeswoman Jen Psaki would not explicitly defend them.

"Both sides haven't ... made the difficult choices needed to continue the peace process. And when there's an absence of peace or a peace process, there's a vacuum left that, at times, is filled by violence. So that's the circumstance we're looking at right now," she said.

Pressed again on Gordon's comments, she said: "I'm not going to parse his words."

She added that the U.S. is "keeping the door open to a peace process in the future."

Yet in an op-ed in the Israeli newspaper Haaretz stressing the importance of the peace process, Obama likewise praised Abbas with little mention of Netanyahu.

In a conference call Wednesday hosted by The Israel Project, former Israeli ambassador to the U.S. Michael Oren suggested the U.S. and others are letting Abbas off the hook and questioned why there was scant criticism of the Fatah-Hamas unity deal that Abbas is party to.

He said the Gordon speech put the "onus" squarely on Israel for the failure of peace talks.

"Right now the administration sees no contradiction between condemning the Hamas rocket fire and maintaining its recognition of the Hamas-Fatah unity government," Oren said.

Republicans have urged the Obama administration to be more aggressive in pressuring Abbas as well as Iran, which according to The Wall Street Journal is supplying weapons to clients in Gaza. Several have even pressed the U.S. government to strike funding for the Palestinian Authority over the Hamas agreement.

"All the words that [Obama] has said up to now are good. But this is the one thing he hasn't done, called for a divorce from the Palestinian Authority to Hamas," Rep. Ileana Ros-Lehtinen, R-Fla., told Fox News earlier this week. "I say enough is enough, they've got to divorce themselves."

White House Press Secretary Josh Earnest noted earlier this week that Secretary of State John Kerry is involved, having spoken with Netanyahu "a couple times over the weekend" to reiterate U.S. concern about the conflict and "our willingness to engage robustly in helping to stop the rocket fire and restore the 2012 ceasefire as soon as possible."

"It is not in the interest of either side for this violence to continue and even to escalate," Earnest said.

In his op-ed, Obama said he still believes a peace plan is achievable.

"As I said last year in Jerusalem, peace is necessary, just, and possible. I believed it then. I believe it now. Peace is necessary because it's the only way to ensure a secure and democratic future for the Jewish state of Israel," he wrote.

But Obama's Mideast peace effort is effectively on hold, after special Mideast envoy Martin Indyk resigned in late June. He was the second envoy to leave the position, amid little progress in bringing both sides together, after former Sen. George Mitchell also stepped down in 2011.

They were hardly the only Obama officials to leave the administration under frustrating circumstances.

Robert Ford, the ex-ambassador to Syria, revealed a month ago that he left because he didn't think he could "defend the American policy."

The conflagration recently in Iraq, where the Islamic State of Iraq and Syria (ISIS) has seized several northern cities and towns, has generated the most heated criticism by Republicans of Obama administration policy.

Senate Republicans voiced concern Thursday that the violence could spread beyond Iraq and into the territory of U.S. ally Jordan, urging him to send an assessment team to the country to determine what it needs.

"We view King Abdallah II as an invaluable ally, and view the defense of Jordan as critical to the national security interests of the U.S. - and Israel," they wrote.

The senators backed Obama's decision to send military advisers to Iraq and reinforce the U.S. Embassy in Baghdad but said that considering the threat posed by ISIS to Jordan, "we believe that this is not enough."