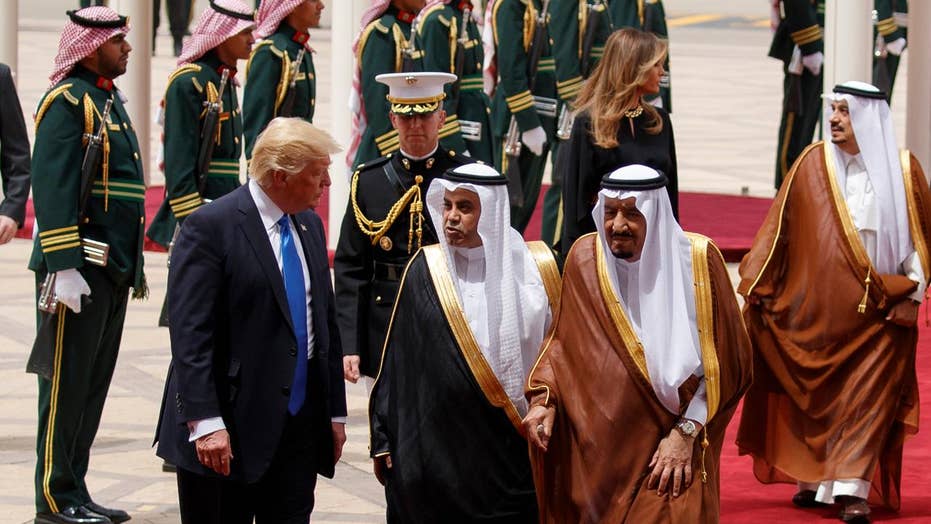 Melania Trump went without a headscarf as she arrived in Saudi Arabia Saturday with her husband.

The first lady wore long sleeves and pants in keeping with the strict dress code that Saudi Arabia enforces for its female citizens but she did not cover her head. Her long hair blew freely in the breeze as she stepped off Air Force One at King Khalid International Airport in the capital city of Riyadh.

While many people applauded Mrs. Obama’s decision, Trump tweeted in 2015 that the people of Saudi Arabia “were insulted.”

U.S. President Barack Obama and first lady Michelle Obama are greeted by Saudi Arabia's King Salman (R) as they arrive at King Khalid International Airport in Riyadh, January 27, 2015. Obama is stopping in Saudi Arabia on his way back to Washington from India to pay his condolences over the death of King Abdullah and to hold bilateral meetings with King Salman. REUTERS/Jim Bourg (SAUDI ARABIA - Tags: POLITICS ROYALS TPX IMAGES OF THE DAY BUSINESS) - RTR4N4SF (REUTERS)

"Many people are saying it was wonderful that Mrs. Obama refused to wear a scarf in Saudi Arabia, but they were insulted. We have enuf enemies," he tweeted, using a short-hand spelling for "enough."

Under the kingdom's strict dress code for women, Saudi women and most female visitors are required to wear a loose, black robe, known as an abaya, in public. Most women in Saudi Arabia also cover their hair and face with a veil known as the niqab.

But covering one's head is not required for foreigners, and some Western women choose to forego the headscarf while in Saudi Arabia.

Earlier this year, British Prime Minister Theresa May and German Chancellor Angela Merkel also shunned head coverings, showing how common it is for high-level female visitors to skip wearing a headscarf or an abaya, the loose-fitting, black robe worn by Saudi women.

Michelle Obama did not cover her head when she accompanied then-President Barack Obama on a condolence visit in January 2015 after the death of King Abdullah. And during her time as first lady, Laura Bush generally went without covering her head, though she once briefly donned a head scarf she received as a gift.

As Obama's secretary of state, Hillary Clinton also did not cover her head on visits to Saudi Arabia.

President Trump's daughter, Ivanka, a senior White House adviser who is accompanying her father, also did not cover her head.

Saudi Arabia is the first stop on a four-nation, five-stop tour that will also take Trump to Israel, Italy and Belgium before President Trump returns to the White House at the end of next week. The first lady is joining the president for the entire trip.