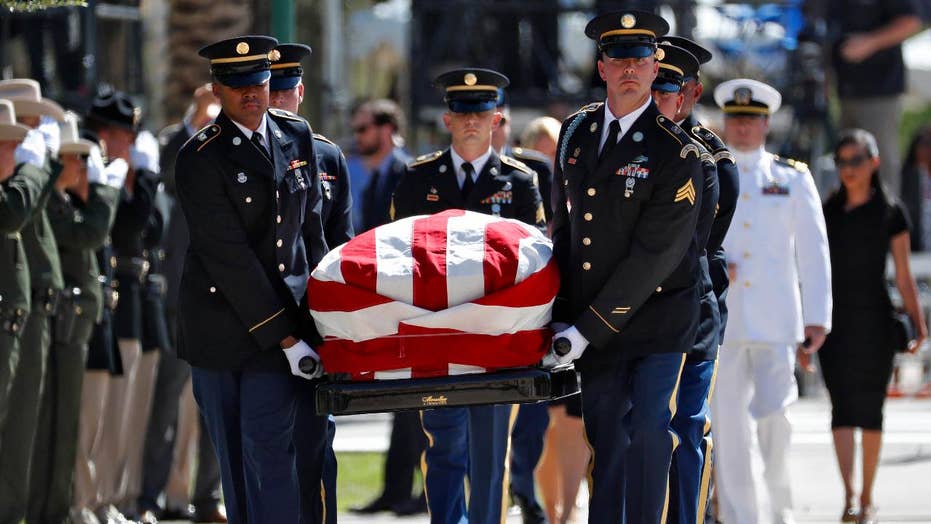 Mourners line up for hours at the Arizona State Capitol; Hillary Vaughn reports from Phoenix on the remarkable scene.

From former presidents to professional athletes, those honoring the late Sen. John McCain this week transcend political parties and professions.

McCain was 81 when he died on August 25 following a year-long struggle with brain cancer. He had served in the U.S. Senate since 1987; before that, he served his country in the Navy during the Vietnam War, becoming a prisoner of war for several years.

In a farewell message released after his death, McCain encouraged the country not to “despair of our present difficulties but believe always in the promise and greatness of America, because nothing is inevitable here.”

Read on for a look at who is expected to attend and speak during services for McCain in Arizona and Washington, D.C.

Former Presidents Barack Obama and George W. Bush are expected to deliver remarks during a Saturday service for McCain in Washington, D.C.

EVERYTHING TO KNOW ABOUT JOHN MCCAIN’S FUNERAL

President Trump is not expected to attend any of the services. And former Alaska Gov. Sarah Palin, who served as McCain’s running mate in 2008, was reportedly not invited either.

A bevy of lawmakers – both Republicans and Democrats – will attend a Thursday memorial service for McCain in Arizona, including fellow Arizona Sen. Jeff Flake.

In D.C., Senate Majority Leader Mitch McConnell and House Speaker Paul Ryan are expected to deliver remarks in honor of McCain. Along with McConnell, Minority Leader Chuck Schumer will present a Senate wreath in McCain’s memory.

Sen. Lindsey Graham and former Sen. Kelly Ayotte will give readings during a service at the National Cathedral Saturday. Former Sen. Joseph Lieberman will also give remarks.

Larry Fitzgerald Jr., a venerable wide receiver for the Arizona Cardinals, is set to give a tribute to McCain at a memorial service in Arizona. He told ESPN he was “taken aback” when he was asked by Cindy McCain to say a few words during the service.

“It’s truly one of the greatest honors of my life to be able to talk about somebody who served his country so passionately and had been so dedicated to policies of this nation,” Fitzgerald said.

McCain was an avid supporter of Arizona sports teams and often seen at sporting events. He even worked to keep the Arizona Coyotes in the area after the former team owner filed for bankruptcy. The Coyotes honored McCain with a bobblehead at a military appreciation night in 2011 and the senator dropped the ceremonial first puck before the game against the Montreal Canadiens.