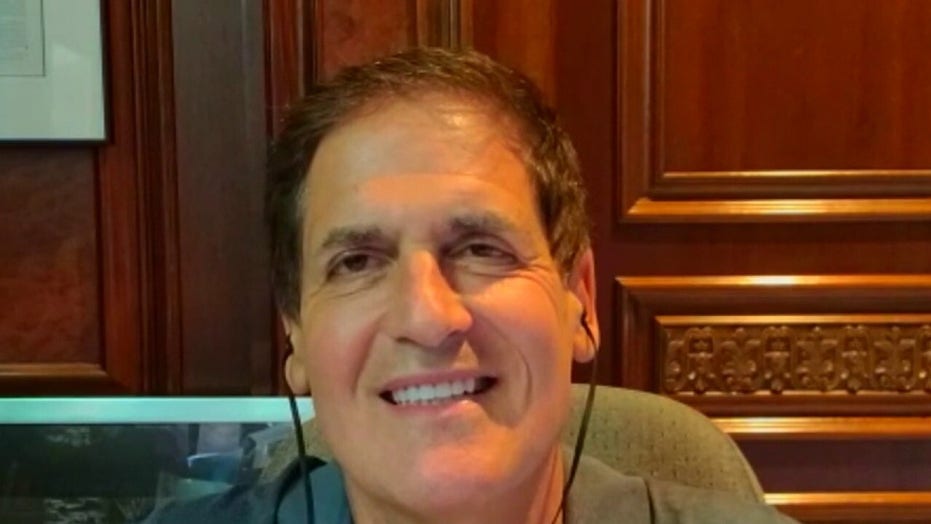 Mark Cuban on the prospects of an economic recovery in America

Dallas Mavericks owner Mark Cuban believes that despite the negative impact the coronavirus outbreak has had on the U.S., it will result in ‘world-changing’ innovation – and possibly his own run at the presidency.

In a conversation with “Fox News Sunday,” Cuban predicted that the struggles facing the country will inspire entrepreneurs to tackle present-day challenges.

MARK CUBAN WANTS TO JOIN TRUMP TASK FORCE ON REOPENING ECONOMY: 'ANY WAY I CAN SERVE MY COUNTRY'

President Trump has predicted a strong and swift economic recovery once normalcy returns to the country, leaving the U.S. stronger than before. While Cuban agreed that the U.S. will see new economic heights after the pandemic is over, he doubted that it will be as quick as Trump believes.

Cuban noted that there is a fear that coronavirus will return at some point. He also warned that while companies laid off millions of workers, they will not jump to hire everyone back right away.

“I have no doubt in my mind that we’ll come back and be stronger than ever," he said. “But it’s not going to happen immediately.”

Cuban said the economy will not simply reopen all at once; rather, it will take “baby steps.” As far as allowing his own employees to go back to work, he said he will rely on the experts.

“When the scientists say it’s safe for my employees to come back to work, that’s when I’ll feel confident enough to let them go back to work,” he said.

Cuban’s next venture could potentially put him in a position to lead the national recovery, as he acknowledged a presidential bid could be in his future. While he admitted that this is not a serious thought at the moment, he would not call it an impossibility given the current state of affairs.

“I never would have considered it prior to a month ago, but now things are changing rapidly and dramatically,” he said. Cuban said he is not “actively pursuing” anything just yet, but noted anything could happen, even though the deadline for independent candidates has already passed in some states.

In the meantime, Cuban took issue with some of the methods the federal government has used to help the economy stay afloat, such as the small business loans made available through the Payroll Protection Plan. Instead of making businesses apply for loans, which has proven to be a time-consuming, complicated, and difficult process, he said banks should simply provide overdraft protection for checks that businesses issue for their regular expenses.

“With an overdraft protection program, companies could just continue as usual, pay their payrolls, pay their insurance, pay the utilities, rent, et cetera, and they wouldn’t have that fear that they wouldn’t be able to make those payments,” he said.

Cuban also warned that the federal government should be tough with big corporations that receive bailout money, saying they should not let CEOs set the terms or conditions for how it should work.

He also suggested that one way the government can help the airline industry without simply offering a handout is to pre-pay for government travel.

Despite this approach, Cuban recognized that even large corporations need help, and that the government should provide it.

"I mean, look, they’re coming for money for a reason. And this is taxpayer money. So I’m not saying don’t give them money, but there needs to be terms and conditions that really put the taxpayer first," he said.