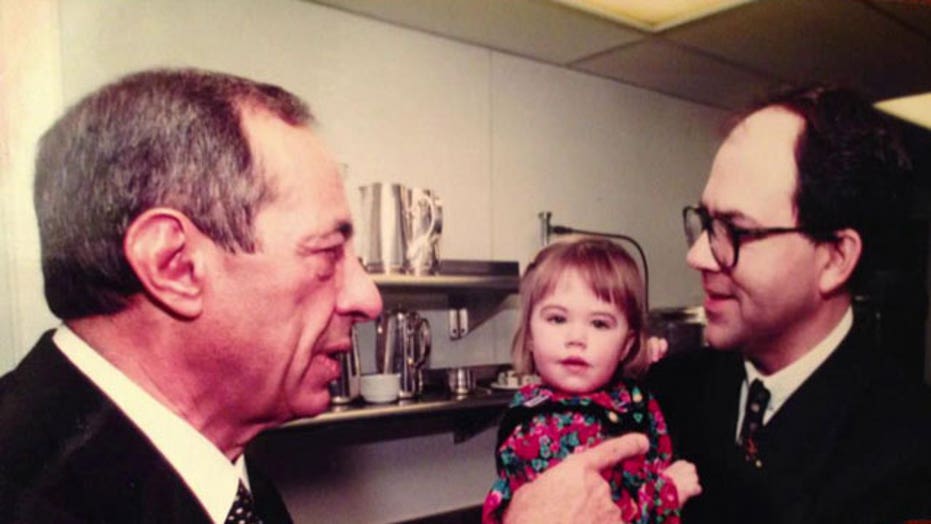 Former New York Gov. Mario Cuomo, the liberal son of Italian immigrants and a gifted orator whose talents brought him national stature, died Thursday. He was 82.

Cuomo died in New York of natural causes due to heart failure shortly after his eldest son, Andrew, was sworn in for a second term as New York governor, the office his father had previously held for eleven years. The elder Cuomo had been hospitalized in November for a heart condition, the day after his son won re-election.

"He is in the heart and mind of every person who is here," Andrew Cuomo said in his inaugural address Thursday. "He is here and he is here, and his inspiration and his legacy and his experience is what has brought this state to this point. So let's give him a round of applause."

In a statement, President Barack Obama called Cuomo "a determined champion of progressive values, and an unflinching voice for tolerance, inclusiveness, fairness, dignity, and opportunity.

"His own story taught him that as Americans, we are bound together as one people, and our country's success rests on the success of all of us, not just a fortunate few," Obama said.

During his time as governor, Mario Cuomo gained national attention with a rousing speech at the 1984 Democratic National Convention criticizing then-President Ronald Reagan. The speech led many pundits to consider Cuomo a leading contender for the Democratic presidential nomination in 1988 and 1992, though he didn’t run on either occasion. Cuomo agonized so publicly over whether to run for the White House that he was dubbed "Hamlet on the Hudson."

In 1991, Cuomo left a plane idling on the tarmac at the Albany airport rather than fly to New Hampshire and jump into the battle for the presidential nomination at the last minute. He left the door open for a lesser-known governor, Bill Clinton of Arkansas.

The New York City native held the highest office in the state between 1983 and 1994. He was defeated in his bid for a fourth term by Republican George Pataki. Before that, he was lieutenant governor of New York from 1979 to 1982.

Cuomo's big political break came in 1982 when he won the Democratic nomination for governor in an upset over New York Mayor Ed Koch. The race was a re-match of their contentious battle for the Democratic mayoral nod in 1977. During that first campaign, posters that read "Vote for Cuomo, Not the Homo" mysteriously appeared in some neighborhoods. Cuomo denied any responsibility, but lifelong bachelor Koch never forgave him. Following his defeat of Koch in 1982, Cuomo went on to beat conservative millionaire Republican Lewis Lehrman.

Cuomo never lost sight of his humble beginnings as a son of Italian immigrants. In his DNC keynote speech, he described his grocer father as "a small man with thick calluses on both his hands [who worked] 15 and 16 hours a day ... I saw him once literally bleed from the bottoms of his feet — a man who came here uneducated, alone, unable to speak the language — who taught me all I needed to know about faith and hard work by the simple eloquence of his example."

When asked by the New York Times Magazine in 2011 if he was proud that his son Andrew was following in his footsteps, he said he felt lucky.

“I somehow stumbled through and became a governor,” he said. “I’ve told you that story. It was all luck. Luck and nothing else.”

In the 1984 convention speech, he criticized Reagan’s economic policies. He accused Reagan of believing in social Darwinism, and said the president’s analogy of America as a “city on the hill” was only for some of its people.

“In fact, Mr. President, this is a nation -- Mr. President you ought to know that this nation is more a ‘Tale of Two Cities’ than it is just a ‘Shining City on a Hill,’” Cuomo said in the address.

Cuomo repeatedly vetoed legislation that would have restored the death penalty in New York, and he closed down the Shoreham nuclear power plant on Long Island. Following his convention speech, Cuomo took his oratorical skill to Notre Dame University, where as the nation's most famous Roman Catholic supporter of abortion rights, he argued the church should not expect him to press for outlawing abortions, given that many Catholics themselves were having them.

In 1993, he turned down an opportunity to be nominated by Clinton for a seat on the U.S. Supreme Court, telling the new president in a letter that "by staying active in our nation's political process, I can continue to serve as a vigorous supporter of the good work you are doing for America and the world."

After being defeated for a fourth term nineteen months later, Cuomo retired from politics and worked at Manhattan law firm Willkie, Farr & Gallagher.

Cuomo is survived by his wife Matilda, and his five children Margaret, Andrew, Maria, Madeline and Chris. Andrew Cuomo was formerly married to Kerry Kennedy, daughter of Robert F. Kennedy.