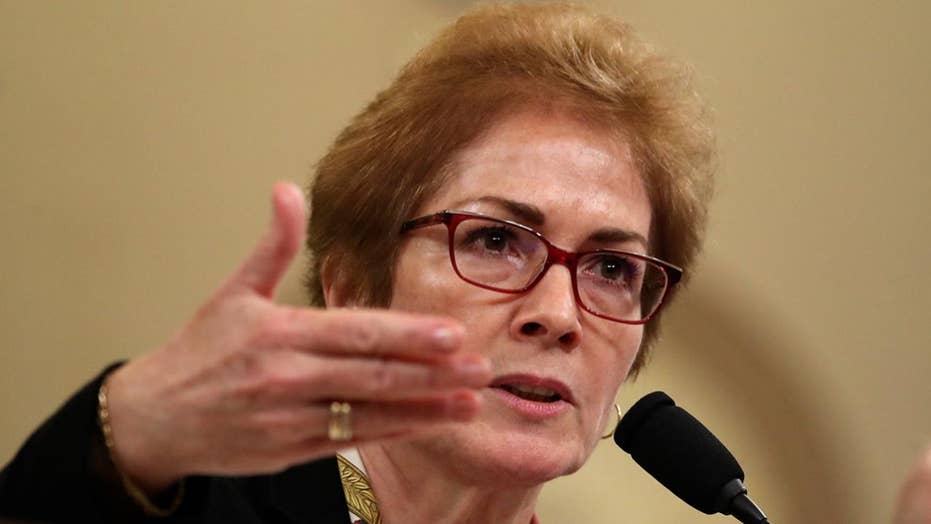 On today's episode of ‘Media Buzz’, Howard Kurtz discusses the testimony that former U.S. Ambassador to Ukraine Marie Yovanovitch gives before the House Intelligence Committee and how President Trump reacts via Twitter.

The praise for the former bureaucrat was caught on video and posted to Twitter by an onlooker at the Blues Alley Club in Georgetown.

The audience clapped and cheered for the 60-year-old, as patrons stopped to thank her for her testimony against President Trump.

JEFF SESSIONS: 'NOT HARASSMENT' TO ASK WHISTLEBLOWER TO TESTIFY BEFORE CONGRESS

President Trump tweeted about Yovanovitch's testimony on Friday and said her dismissal was justified due to her poor track record and a lack of results.

"Everywhere Marie Yovanovitch went turned bad. She started off in Somalia, how did that go? Then fast forward to Ukraine, where the new Ukrainian President spoke unfavorably about her in my second phone call with him," Trump tweeted. "It is a U.S. President’s absolute right to appoint ambassadors."

ABC NEWS CORRESPONDENT: YOVANOVITCH 'DID NOT REALLY GET US ANY CLOSER' TO PROVING TRUMP COMMITTED IMPEACHABLE OFFENSES

"They call it “serving at the pleasure of the President," Trump continued. "The U.S. now has a very strong and powerful foreign policy, much different than proceeding administrations. It is called, quite simply, America First! With all of that, however, I have done FAR more for Ukraine than O."

Freshman Rep. Alexandria Ocasio-Cortez, D-N.Y., accused Trump of trying to obstruct justice with his tweet and claimed the president was attempting to intimidate a witness.

"Trump himself is clearly not satisfied with only one article of impeachment," she tweeted Friday. "His choice to publicly broadcast his own, personally authored witness intimidation means he’s wants to sign up for another article on obstruction of justice, too."