Jeff Sessions: 'Not harassment' to ask whistleblower to testify before congress

It is not harassment for congressional lawmakers to ask the Trump whistleblower to reveal his identity and step forward for public testimony, said former attorney general and U.S. Senate candidate Jeff Sessions on "Fox & Friends" Monday.

"It's unthinkable that a witness who pretends to have information that would impeach a president can be secret," he said. "Of course, that person eventually would have to be made public and, asking for that is not harassment or not kind of threatening a witness, that's for sure."

"The pattern has been that the news reports and the allegations were not born out when new evidence came out. That happened throughout the Russia collusion matter. And it looks like it's happening again," Sessions continued. "I truly believe, it's not close to impeachment. It's not the right way to proceed with this ... To convert a normal political disagreement into an impeachment matter is really a dangerous thing. We do not need to spin up impeachment every time we have a disagreement ... between the Congress and the president."

Sessions called on House Speaker Nancy Pelosi, D-Calif., to bring the probe to an end and criticized her for making public threats against the president. 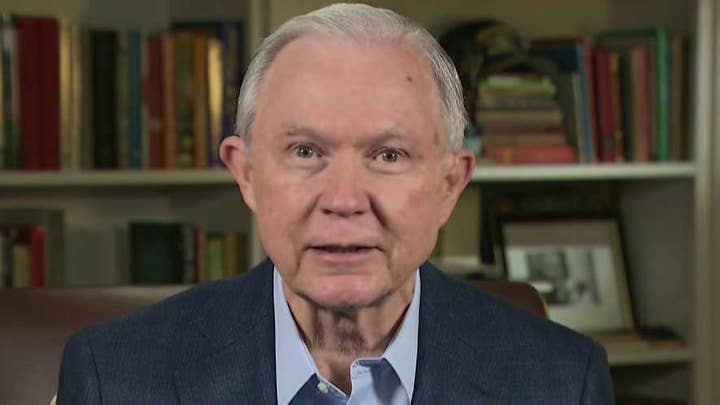 "I think the speaker just needs to bring this thing to a conclusion," he said earlier in the segment. "It's not... well-founded, to begin with, but just to pick fights with the president and try to make those kind of threats, I think is wrong at this time, for sure."

Sessions also commented on remarks made by Attorney General Bill Barr and agreed with him about the power-hungry nature of far-left progressives.

"Another thing [progressives] are doing overtly, is saying free speech, basically, is dead," Sessions said. "I've been on college campuses recently and had ... actual assertions that I do not, as a former attorney general, can't speak on a major college campus. This is really an unbelievable misunderstanding of the power of our constitutional heritage.

"I am glad attorney general Barr is raising this," he continued. "And it happens in a lot of different ways ... These people want power. They want to do what they want to do, to impose their will because they think they can make things perfect and gain more power. But in truth, the constitutional heritage is what protects our prosperity, our liberty, our freedom. It's just a dangerous trend in America today. "