Sen. Lindsey Graham, R-S.C., believes a push for President Trump's impeachment by congressional Democrats will only lead to his re-election.

"To my Democratic colleagues in the House, if you bring impeachment after [Special Counsel Robert] Mueller issued his report ... then it's going to blow up in your face," Graham told Fox News' Jeanine Pirro on Saturday's installment of "Justice with Judge Jeanine."

"You're being unfair to the president and he's going to get re-elected," he said.

When asked about escalating tensions with Iran, Graham praised Trump for pulling out of the Obama-era Iran nuclear deal and for applying sanctions against the country.

He urged the president to stand tough and not let Iran flex its muscle over the Strait of Hormuz, an international shipping gateway between the Persian Gulf and the Gulf of Oman. The waterway separates Iran and the United Arab Emirates and is 21 miles across at its narrowest point.

The strait is critical to the oil industry, with it being used to ship more than 22 million barrels of oil and products per day in the first half of 2018.

"To President Trump, do not let them take over the Strait of Hormuz," Graham said. "Keep the pressure on and if they continue to do this, sink their navy like Ronald Reagan did back in the '80s." 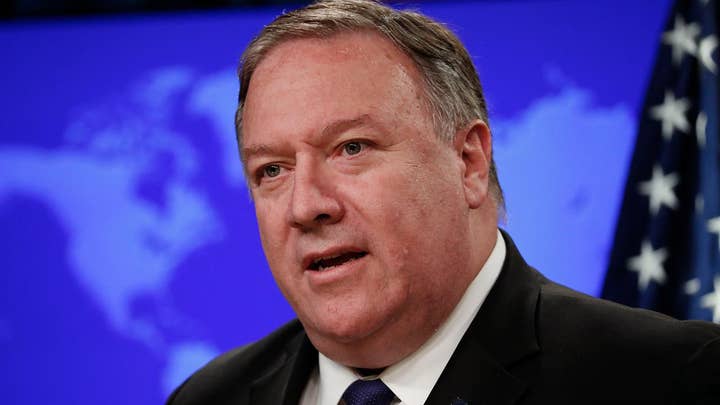 Iran threatened to close the strait earlier this year and the U.S. blamed the country for attacks on two oil tankers in the Gulf of Oman earlier this week. Graham touted Trump's confrontational style of diplomacy, saying it has yielded positive results.

"He has put Iran on the run. He's taken on China. He's got [Venezuelan President Nicolas] Maduro on the ropes," Graham said. "I love this man's foreign policy."