'Impeach Trump' demonstrations organized by Moveon and other activist organizations

Activists took to the streets Saturday to hold rallies calling for the impeachment of President Trump, as they seek to pile further pressure on Democratic leaders in Congress to back a push to oust the president.

“Donald Trump's abuses of our communities and country demand action from Congress, which has the responsibility and authority to hold Trump accountable,” a website page for the  "#ImpeachTrump: Act to Defend Democracy" national day of action by left-wing group MoveOn read. “The next crucial step is an inquiry into whether to draft articles of impeachment.”

The call included a note that the actions “are intended to be nonviolent and peaceful” and that organizers expect protesters to “act lawfully” and de-escalate any confrontation.

While protests were being eyed across the country, California seemed to be the main state for the demonstration. The Mercury News reported that more than 140 rallies were expected through Southern California and across the nation overall.

The outlet reported that the day began with a protest in Seal Beach -- aptly named “Impeach on the Beach” where demonstrators spelled out “Impeach!” with beach towels.

Some rallies appeared to have the support of Democratic lawmakers. The Oregonian reported that an #ImpeachTrump rally in downtown Portland would feature Rep. Earl Blumenauer.

“An impeachment inquiry is the best way for Congress to continue to investigate Trump's crimes, misconduct and abuse of power,” the event details read.

The Washington Examiner reported that some events will be protests, while others will be readings of pro-impeachment speeches from Democrats such as Sen. Elizabeth Warren, D-Mass., and Rep. Rashida Tlaib, D-Minn. 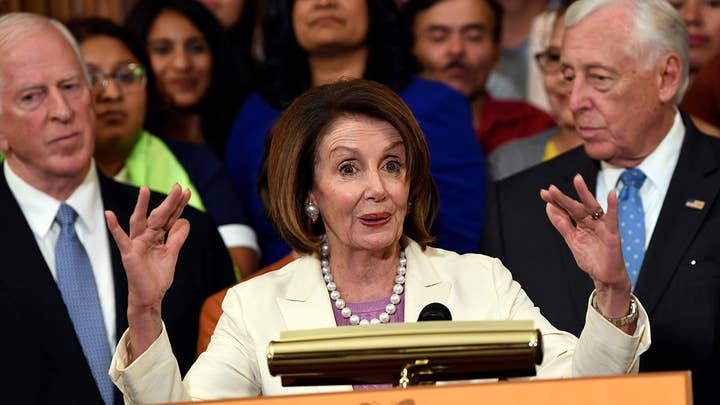 The rallies come amid continued calls for Trump’s impeachment by the left-wing base of the Democratic Party in the wake of the release of the partially-redacted Russia report.

PELOSI DOWNPLAYS HOUSE DEM SUPPORT FOR TRUMP IMPEACHMENT, SAYS 'IT'S NOT EVEN CLOSE'

While that report did not find sufficient evidence to charge members of the Trump team with conspiracy, and declined to make a call on if Trump obstructed justice, Democrats have claimed that the report raises further questions about both topics and have sought to continue investigations in the House.

House Intelligence Committee Chairman Adam Schiff, D-Calif., on Wednesday held the second in a series of hearings on the Russia controversy, to examine what he called “the disturbing findings” of the report. Republicans slammed what they called a "grotesque spectacle."

However, Democratic leaders have expressed nervousness about a push for impeachment. Such a push may succeed in the House, but would almost certainly fail in the Republican-controlled Senate.

This week House Speaker Nancy Pelosi, D-Calif., said that impeachment was “not even close in our caucus.”