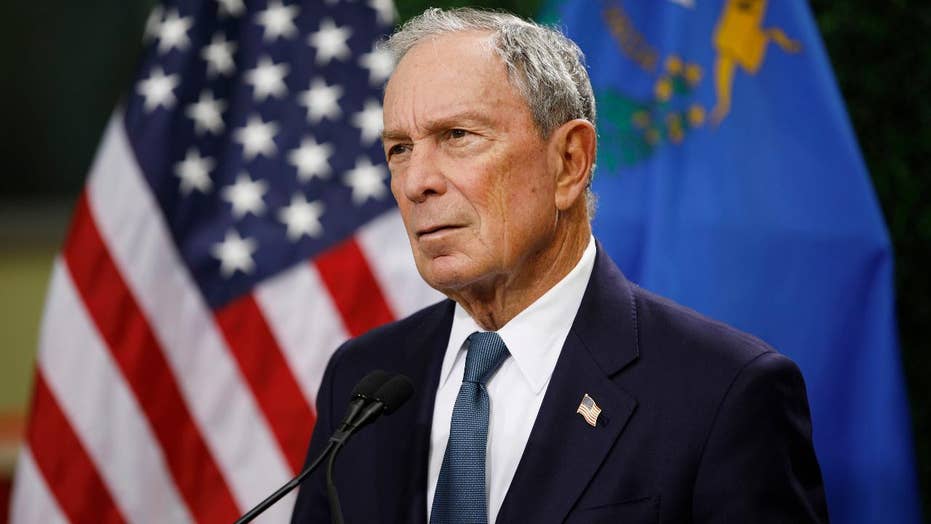 The former mayor's speech comes after re-emerging as a potential 2020 presidential candidate.

“I literally believe people want something different than another wealthy person in the White House. I believe that in my heart,” the Democratic Minnesota senator told reporters Friday after holding a town hall in the first-in-the-nation presidential primary state of New Hampshire.

Klobuchar’s comments came a couple of hours after reports that Bloomberg – the former three-term New York City mayor and business and media mogul -- is launching a massive TV ad blitz from coast to coast on Monday.

Another Democratic candidate, Vermont Sen. Bernie Sanders, issued a scathing statement railing against the ad buy. “I’m disgusted by the idea that Michael Bloomberg or any other billionaire thinks they can circumvent the political process and spend tens of millions of dollars to buy our elections,” Sanders said.

Pointing to Bloomberg and Tom Steyer – the billionaire environmental and progressive advocate who’s spent roughly $50 million running TV commercials since announcing his candidacy for the Democratic presidential nomination in July – Klobuchar acknowledged: “I am not going to be able to compete with the money of Bloomberg or Steyer. That is true.”

But she emphasized that she believes voters “want someone they can relate to and have their back and who’s shown leadership in the past.”

Speaking to the audience earlier at the town hall, Klobuchar said to big applause that “I just don’t think you should be able to have billionaires with an unfair advantage in this election.”

A Bloomberg announcement on his 2020 plans could be eminent.

Word of Bloomberg’s massive ad buy came one day after he filed paperwork with the Federal Election Commission to run for president.

But Bloomberg aides told Fox News the move was not an announcement that he’s running for president -- merely another incremental step in the process.

A Bloomberg adviser told Fox News “when we filed a petition to get on the ballot in Alabama on Nov. 8, it started a process where we had to file with the FEC within 15 days. This is another step towards running, but it's not an announcement nor indicative of a final decision.”

Bloomberg has now filed to place his name on the presidential primary ballots in Alabama, Arkansas, Michigan, Georgia and Texas.

BLOOMBERG WON'T CAMPAIGN IN EARLY VOTING STATES IF HE RUNS

A top Bloomberg advisor announced two weeks ago that if his boss does run for the White House, he would be skipping the early voting states of Iowa, New Hampshire, Nevada and South Carolina and instead run a broad national campaign.

“The late timing of our entry means that many candidates already have a big head start in the four early states, where they've spent months and months campaigning and spending money,” Bloomberg adviser Howard Wolfson said in a statement earlier this month.

Asked by Fox News about that strategy, Klobuchar said “that’s up to him and I think part of that is he didn’t want to deal with all of this grassroots campaigning from the beginning. That’s on him.”

And she highlighted that “you want to have a candidate for president who’s willing to go out day after day and talk to regular people."

Sen. Cory Booker – who touts that he’s “committed to having a campaign finance system that does not advantage the richest person in the race” – called the Bloomberg ad buy “frustrating.”

The New Jersey Democrat who served as Newark’s mayor before being elected to the Senate told Fox News “when I was a mayor, Mike was one of those mentor mayors to me. But when it comes to presidential politics, your qualifier should not be money. It should not put you at an advantage over other candidates who might have incredible service and accomplishments and the like.”

And Booker, speaking with reporters after a town hall in Durham, New Hampshire on Friday evening, emphasized that “we’ve got to get this money out of this politics.”