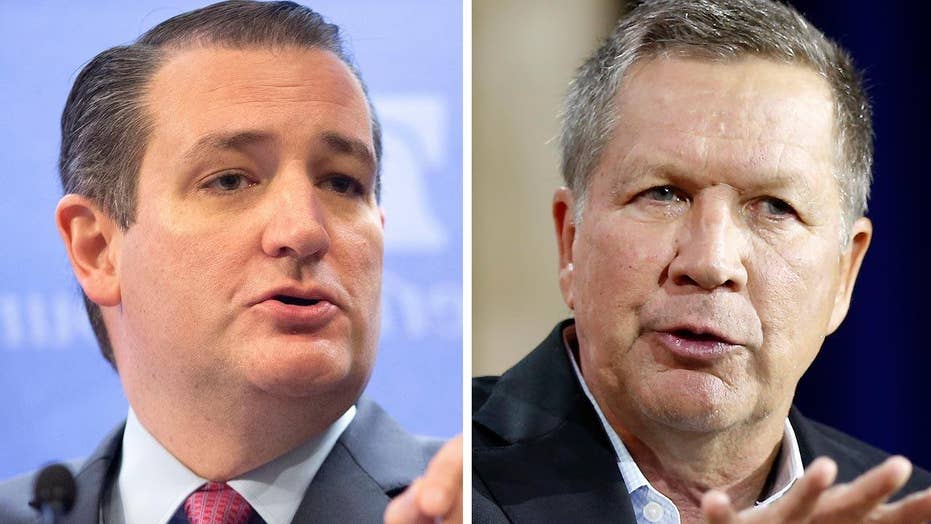 Could a Cruz-Kasich alliance backfire?

On 'The Kelly File,' Herman Cain provides insight into the strategy

Ohio Gov. John Kasich appeared Monday to undercut his campaign's extraordinary agreement with Republican presidential rival Sen. Ted Cruz to stand aside in the key state of Indiana by urging voters in the Hoosier State to support him anyway.

"I've never told them not to vote for me," Kasich said while campaigning in Pennsylvania. "They ought to vote for me." He added that he simply agreed not to spend "resources" in Indiana.

Adding to the mixed messaging was the fact that Kasich planned to travel to Indianapolis Tuesday for a private fundraising event, despite canceling two planned public rallies in Indianapolis and Noblesville.

Kasich made the remarks approximately 13 hours after his camapign announced an arrangement to give Cruz "a clear path" in Indiana, which holds a winner-take-all primary next week. In exchange, Cruz is to give Kasich a clear path in Oregon and New Mexico in an effort to prevent front-runner Donald Trump from attaining the necessary delegates to seal the GOP nomination before this summer's national convention.

"It's not a big deal," Kasich said of the agreement, which he described as a recognition of the realities of the campaign. Kasich has only won one primary contest, in his home state of Ohio, but has insisted he can win the Republican nomination at a contested convention.

By contrast, Cruz trumpeted the agreement during a campaign stop in Indiana Monday, saying it was "big news" that Kasich had pulled out.

"That is good for the men and women of Indiana," Cruz told reporters. "It's good for the country to have a clear and direct choice."

Cruz insisted that "there is desperation on the Trump side", arguing that the real estate mogul knows he won't be able to get enough delegates to the Republican National Convention to win the party's nomination and "is in real trouble."

Meanwhile, Kasich's campaign efforts in Oregon suffered a setback Monday, when it was revealed that his campaign never submitted the governor's biography to the Oregon secretary of state's office. The office prints out a voter pamphlet each year bearing information on each candidate.

This year, the pamphlet includes Kasich's name followed by an asterisk indicating that he didn't submit any information. Cruz and Donald Trump, meanwhile, each get a full column explaining their positions and personal histories.

Kasich's campaign late Monday sent out a statement saying their man is on the ballot in Oregon "and the campaign will do its part to educate voters about why they should vote for him the primary."