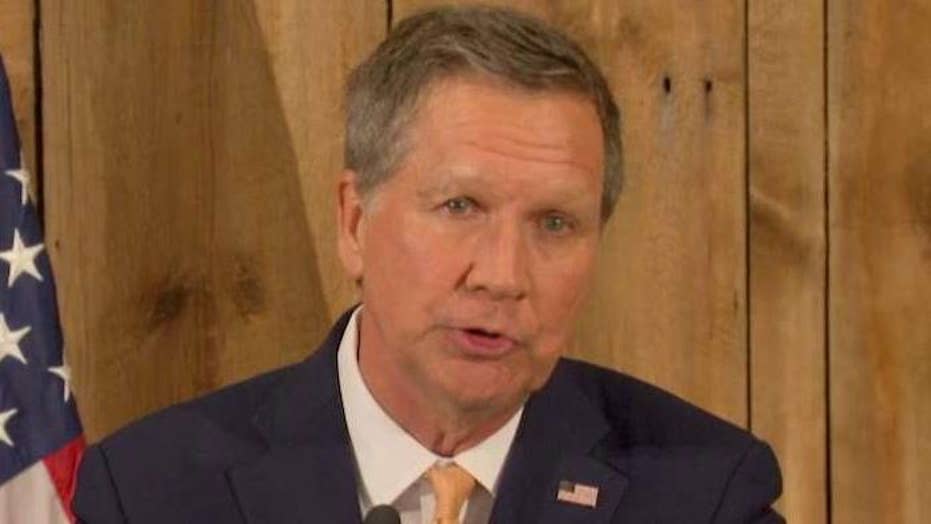 Republican governor of Ohio thanks family, staff and supporters

Ohio Gov. John Kasich has become the latest Donald Trump rival to take a clenched-fist approach to the delegates he won during the primary season, moving this week to keep those delegates as bargaining chips going into the party's July nominating convention.

A former top aide to the Kasich presidential campaign confirmed to Fox News on Tuesday that he is instructing his delegates to stay bound to him through the convention.

Kasich joins Sens. Marco Rubio, R-Fla., and Ted Cruz, R-Texas, in keeping delegates on lockdown despite suspending his presidential primary campaign weeks ago. Though Trump is expected to formally clinch the nomination during the final June 7 primaries, his ex-rivals are thought to be holding onto delegates as a means of leverage.

Kasich thinks that holding onto them will force or at least persuade Trump to run a more positive general election campaign and try harder to unify the party, a Kasich aide told The Washington Post, which first reported the story.

According to The Washington Post, Kasich on Monday told party officials that the 161 delegates he won in state primaries and caucuses should keep their allegiance to him through the Cleveland convention.

Kasich and Cruz suspended their respective campaigns after Trump decisively won the Indiana primary in early May and became the presumptive GOP presidential nominee.

Cruz has 568 delegates to his name and Rubio, who suspended his campaign after losing his home-state primary in March, has 166. Trump has 1,169 – close to the 1,237 needed to secure the nomination.

Neither Cruz nor Kasich nor Rubio has endorsed Trump, following a bruising primary in which Trump frequently launched personal attacks on his rivals -- who often responded with their own scathing counter-attacks.

Kasich reportedly sent personal letters to party officials in 16 states and the District of Columbia making clear he does not intend to release the delegates he won there. He also notified Republican National Committee Chairman Reince Priebus of his plans.

"I appreciate the work of the party during this primary season, and I thank the voters of Ohio for putting their faith in me. Although I have suspended by campaign, I do not release any Delegates bound to me," Kasich reportedly wrote Ohio Republican Party Chairman Matt Borges.