Julian Castro: Trump has completely failed at solving he immigration problem at our southern border

Julián Castro,  the Housing and Urban Development Secretary under former President Barack Obama, claimed on Thursday that the previous administration was compassionate toward immigrants -- unlike President Trump's White House.

"I will say the big difference, number one, I believe that Barack Obama actually had a concern and a compassion for these immigrants," Castro, a 2020 Democratic presidential candidate, told Fox News during a town hall event.

He was responding to Fox News anchor Bret Baier's question about whether former Rep. Beto O'Rourke, D-Texas, a fellow 2020 hopeful, was right in criticizing Obama for deporting too many people during his administration.

Castro responded by saying that while he was critical of some of Obama's actions, he saw big differences between that administration and Trump's.

2020 DEM JULIAN CASTRO CALLS FOR ILLEGAL IMMIGRATION TO BE TREATED AS CIVIL, NOT CRIMINAL, OFFENSE 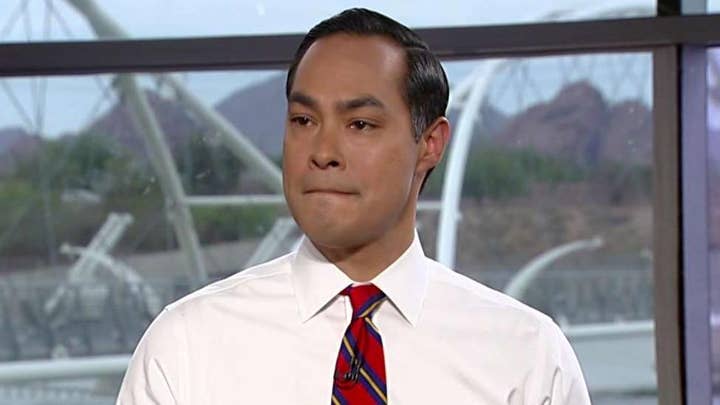 His comments came as the administration labeled the crisis at the border a "full-blown emergency" at the border. While Castro recognized there were problems at the border, he seemed to back away from the idea that the U.S. was facing a "crisis."

"I think it's a crisis of leadership," Castro said when Baier asked about that description. "I think the crisis that exists is driven by the conditions in countries like El Salvador, Honduras, and Guatemala -- and instead of making it better, this president is actually making it worse.

Castro told Baier and Fox News host Martha MacCallum that he wanted to see Trump implement Obama's "family case management program" which he suggested would get more immigrants to return for asylum hearings.

"So I say, instead of treating people cruelly, instead of wasting money, instead of wondering where people are at, why don't we implement a smart, effective, and humane program like that family case management program?" he asked.