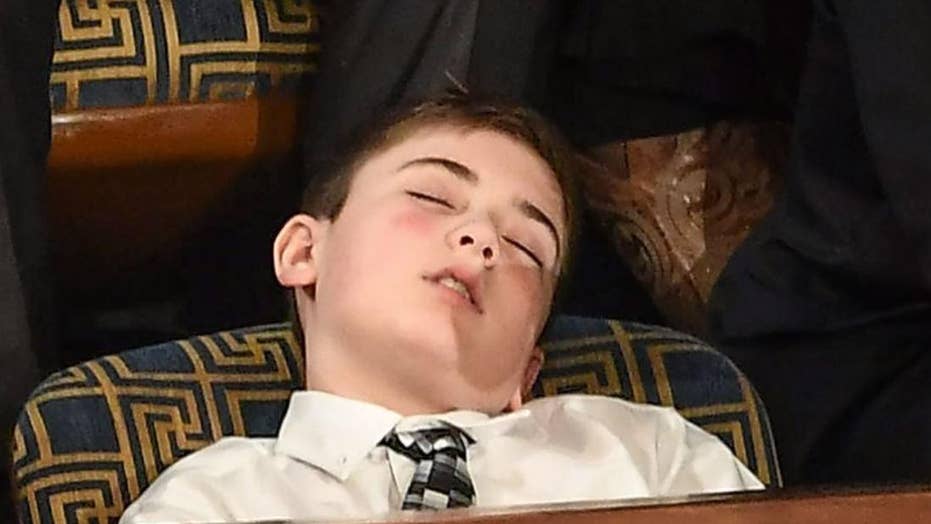 Joshua Trump, the 11-year boy bullied for having the same last name as President Trump, goes viral as he appears to fall asleep during State of the Union.

The 11-year boy bullied for having the same last name as President Trump went viral in a cute moment after he appeared to fall asleep during Tuesday's State of the Union address.

Joshua Trump, who attended the event after being invited by first lady Melania Trump, sat next to childhood cancer survivor Grace Eline.

That’s when the young Trump won the hearts of social media after photographers caught a picture of him snoozing in the midst of the speech.

“Joshua Trump owns,” wrote one user. “This is so cute. Joshua trump sleeping through #SOTU2019,” seconded another.

Joshua, a sixth-grader in Wilmington, Del., has been bullied by his fellow classmates because of his last name, his mother said.

The bullying began shortly after Trump began his presidential bid for the White House, prompting the family to pull the boy out of school and begin homeschooling due to the abuse by other children. The family has no relation to the President.

According to the White House, the middle schooler now says he’s “thankful” to the first lady and the Trump family for their support.