Rep. Jordan on potential Trump impeachment: ‘I do not see how that unifies the country’

Rep. Jim Jordan on Wednesday called for House GOP Conference Chair Liz Cheney to be removed from her post.

Jordan, R-Ohio, said the House Republican Conference "should have a second vote" to remove Cheney from her post after she announced this week that she would vote to impeach President Trump.

A source familiar with Jordan's thinking told Fox News that "it's time for a regime change in the conference."

Cheney said she plans to support the Democrats’ effort to impeach Trump for inciting insurrection, saying the president "lit the flame" for the Jan. 6 riot.

"There has never been a greater betrayal by a president of the United States of his office and his oath to the Constitution," she said in an earlier statement. 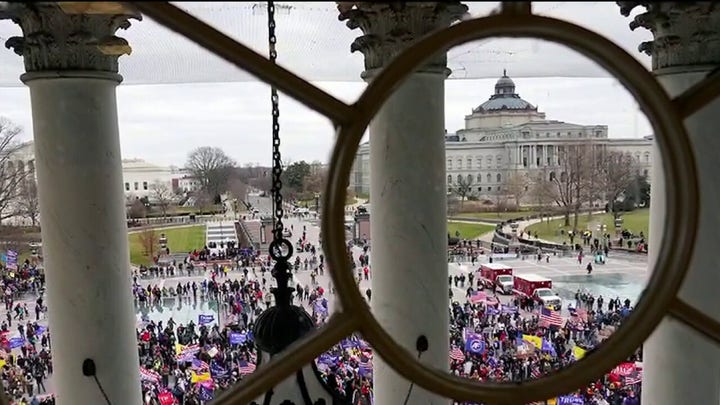 Fox News obtained a petition circulating in the House, calling for a "special meeting" of the Republican Conference "to discuss a resolution on your leadership."

The topic of the resolution is: "Calling on Congresswoman Liz Cheney to resign her position as Chair of the Republican Conference."

The petition states: "Whereas, Congresswoman Cheney's condemnation of President Trump and her support for President Trump's impeachment have been used multiple times by Democrats as justification for a truncated impeachment process that denies the president due process."

The petition also states that Cheney's "personal position on issues does not reflect that of the majority of the Republican Conference and has brought the conference into disrepute and produced discord."

It is unclear how many members of the GOP conference have signed onto the petition at this time, but other Republicans have signaled their disapproval of her support of impeachment.

But a House GOP aide told Fox News that the push is "not surprising" and something that was "expected" after her move to support impeachment.

The aide, though, said the removal of Cheney would counter any effort for the party to move forward after the president leaves office.

Cheney, though, said Wednesday that she's "not going anywhere."

"This is a vote of conscience," Cheney said. "It's one where there are different views in our conference."

She added: "But our nation is facing an unprecedented, since the Civil War, constitutional crisis. That's what we need to be focused on. That's where our efforts and attention need to be."

Five Republicans in the House have said that they will vote to impeach.

But Republicans slammed Cheney, calling for her to step down.

Rep. Liz Cheney, R-Wyo., is calling for a temporary halt to tours at the U.S. Capitol as the coronavirus continues to spread. (Photo by: William B. Plowman/NBC/NBC NewsWire via Getty Images)

"When Rep. Cheney came out for impeachment today, she failed to consult with the conference, failed to abide by the spirit of the rules of the Republican Conference, and ignored the preferences of Republican voters," Rosendale said in a statement. "She is weakening our conference at a key moment for personal political gain and is unfit to lead. She must step down as conference chair."

Censure is a formal reprimand or statement of disapproval. The House has three formal modes of discipline: reprimand, censure and expulsion.

A separate source told Fox News on Monday that Trump told McCarthy that he bears some of the blame for the Capitol riot last week.

McCarthy’s openness to censure comes as House Democrats are set to consider an article of impeachment against Trump Wednesday on the House floor which claims Trump incited insurrection on Jan. 6.

"I don’t believe it will be whipped," one senior Republican aide said.

But in a letter to GOP colleagues, McCarthy said he opposes impeaching the president, and said doing so would further divide the country in the wake of the attack on the Capitol last week.