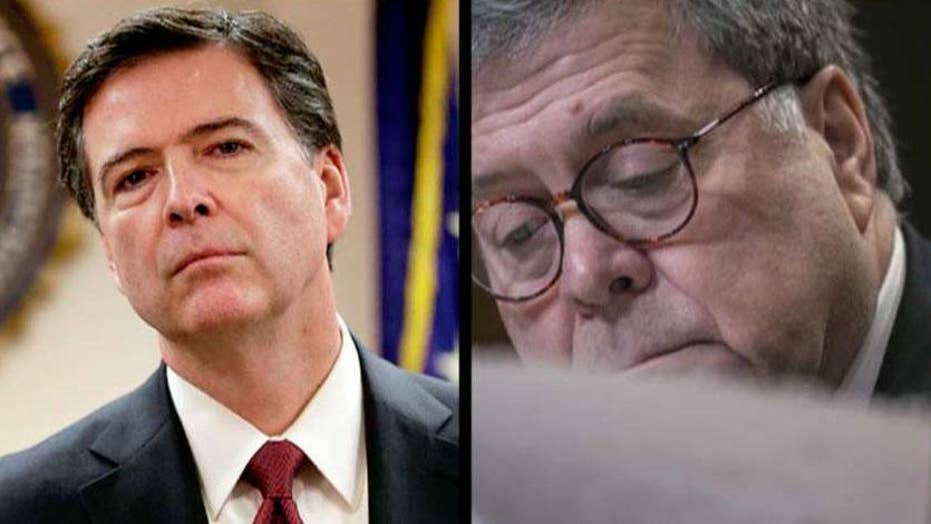 Former FBI Director James Comey lambasted the president's claim that he and his committed "treason" during the Russia investigation -- noting that although it was tempting to ignore the president, he was acting as a "liar who doesn’t care what damage he does to vital institutions."

"There was no corruption. There was no treason. There was no attempted coup. Those are lies, and dumb lies at that. There were just good people trying to figure out what was true, under unprecedented circumstances," Comey wrote in The Washington Post on Tuesday.

His fiery words came as the administration ramped up its investigation into the Russia probe's origins. Attorney General William Barr, during a Fox News interview in May, pledged to get to the bottom of the probe's origins and the president, for his part, authorized the DOJ to declassify intelligence documents related to the investigation.

"The conspiracy theory makes no sense. The FBI wasn’t out to get Donald Trump. It also wasn’t out to get Hillary Clinton. It was out to do its best to investigate serious matters while walking through a vicious political minefield," Comey wrote.

JAMES COMEY BLASTS AG BARR, ACCUSES HIM OF 'SLIMING HIS OWN DEPARTMENT'

"But go ahead, investigate the investigators, if you must. When those investigations are over, they will find the work was done appropriately and focused only on discerning the truth of very serious allegations."

Comey listed a series of events that he portrayed as discrediting Trump's "whole 'treason' narrative." If the FBI wanted to undermine Trump, he asked, why did they, especially the "much-maligned FBI supervisor Peter Strzok, keep the investigation secret.

He added sarcastically that the FBI engaged in the "worst deep-state conspiracy ever" by not leaking details of the investigation just before the 2016 election. "But wait, the conspiracy idea gets dumber," Comey said before noting how he sent Congress a letter about Trump's opponent, former Democratic presidential nominee Hillary Clinton.

"I judged that hiding that fact — after having told Congress repeatedly and under oath that the case was finished — would be worse than telling Congress the truth," he said.

LORETTA LYNCH ACCUSES COMEY OF MISREPRESENTING KEY CLINTON PROBE CONVERSATION, WAS 'QUITE SURPRISED' BY HIS TESTIMONY

"It was a decision William Barr praised and Hillary Clinton blamed for her loss 11 days later," he added. "Strzok, alleged architect of the treasonous plot to stop Trump, drafted the letter I sent Congress."

"And there’s still more to the dumbness of the conspiracy allegation," he said, noting that former FBI Deputy Director Andrew McCabe authorized a disclosure related to the Clinton Foundation.

Amid Comey's op-ed, House Democrats continued pursuing the president with subpoenas which he ignored, citing executive privilege. Democrats appeared to focus on uncovering more details related to the obstruction of justice concerns that Special Counsel Robert Mueller outlined in his report on the Russia investigation.

Although Mueller didn't conclude that Trump obstructed justice or conspired with the Russians, Democratic lawmakers have described many of his findings as troubling.

REP. GAETZ: AMERICANS ON THE 'SUPERHIGHWAY' TO TRUTH ABOUT RUSSIA PROBE

Republicans, meanwhile, have indicated that the Justice Department's new investigation would help bring justice and accountability to a controversy that engulfed American media for the better part of Trump's first two years in office.

Rep. Bradley Byrne, R-Ala., on Tuesday, said he planned to introduce a bill specifically geared toward "investigate the investigators." "It was a partisan witch hunt from the beginning and we need to get to the bottom of who was behind this and how far up the chain does it go," he said.

The legislation would "codify" Barr's decision to appoint a U.S. attorney to further investigate the probe's origins.