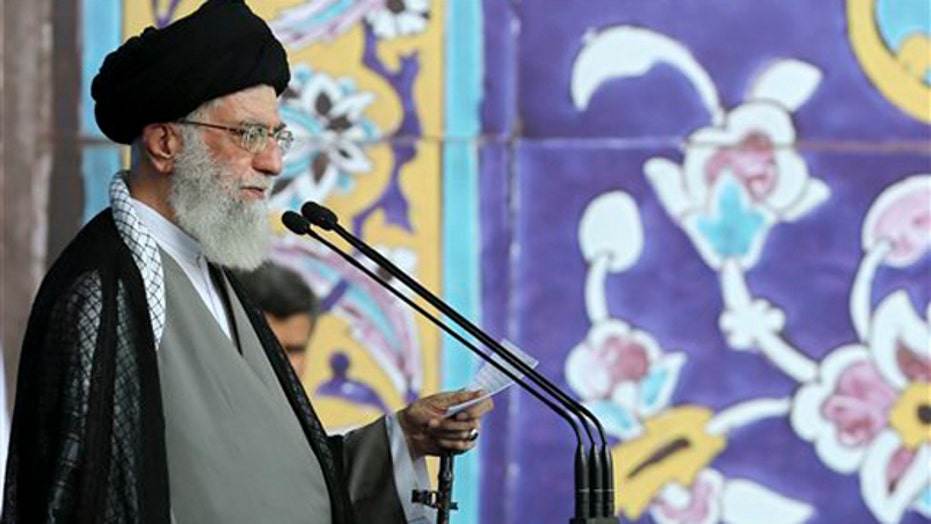 Iran’s supreme leader Ayatollah Ali Khamenei said Saturday that a historic nuclear deal reached with world powers earlier this week won’t have any effect on Iran’s policy toward the U.S.

Khamenei said in a televised speech that U.S. policy in the Middle East runs counter to Tehran’s strategy and that Iran will continue to support its allies in the Middle East including the Lebanese, Hezbollah, Palestinian resistance groups and the Syrian government.

"Our policy towards the arrogant U.S. government won't change at all," he said. He was addressing a large crowd in Tehran, broadcast live on state TV, to mark the end of the Muslim holy fasting month of Ramadan.

Iran calls its Lebanese ally Hezbollah a "resistance movement" while the U.S. describes it a terrorist group. And Iran continues to call for the destruction of Israel; Khamenei in his Saturday speech described Israel as a "terrorist, baby-killer government."

Israeli Prime Minister Benjamin Netanyahu has strongly opposed the deal, saying it will enable Iran to emerge from crippling economic sanctions while doing nothing to moderate Iran's aggressive behavior around the Middle East.

"U.S. policies in the region are 180 degrees in contrast to Iran's policies," Khamenei said. "Whether this text (nuclear deal) is approved or disapproved, we won't give up supporting our friends in the region. The oppressed Palestinian nation, Yemen, Syria, Iraq, Bahrain, the honest mujahedeen of resistance in Lebanon and Palestine will enjoy our constant support."

Iran’s direct talks with Washington was only limited to the nuclear issue and that there can’t be any dialogue or deal with the U.S. over any other issues, he said. However, Khamenei has said in the past that he door to other issues could open should the U.S. carry out its obligations under the deal in good faith.

Khamenei’s comments are the most detailed since a deal was agreed upon earlier this week. His remarks are widely held because in most of Iran’s matters, he has the final say and could still back outy of the agreement. The deal between Iran and six world powers curbs Iran’s nuclear program in exchange for the removal of sanctions that have crippled Iran’s economy.

The hard-line stance on future negotiations with the U.S. quenches the idea Iran’s Foreign Minister brought up about cooperation between both parties on fighting the Islamic State.

Javid Zarif said in an Eid message Friday that he hopes the nuclear deal could bring about a better relationship abroad. President Hassan Rouhani has preached a foreign policy of engagement based on mutual respect since his election in 2013, according to The Wall Street Journal.

Even with a deal reached, the U.S. and Iran still have obstacles to clear before anything official comes about.

Iran’s parliament and the Supreme National Security Council must sign off on the deal, while Khamenei still has to agree to the deal.

Congress has 60 days to weigh-in on the deal. President Barack Obama could veto a disapproving resolution should Congress disapprove of it.